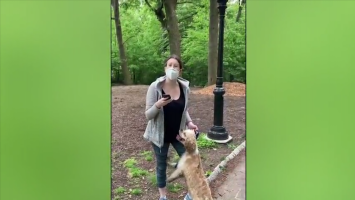 NEW YORK – The white woman who lost her job after video surfaced of her calling 911 on a Black birdwatcher in Central Park is suing her former employer, alleging the company hastily fired her and made the decision based on her gender and race.

Amy Cooper, who had faced criminal charges of false reporting to police before prosecutors dismissed the case in February, said asset management firm Franklin Templeton did not perform an adequate investigation before firing her the day after video of the incident went viral.

Cooper was walking her dog in the Ramble, a section of Central Park that requires dogs be leashed, when Christian Cooper, a Black birdwatcher who is not related to Amy Cooper, asked her to leash her pet.

The video posted to social media quickly went viral, with millions of views that day. The incident occurred the same day George Floyd was killed in Minneapolis by Derek Chauvin, the white police officer who knelt on his neck and was recently convicted of his murder.

In her lawsuit, filed in federal court, Amy Cooper alleges Franklin Templeton’s actions allowed for her to be “characterized as a privileged white female ‘Karen’ caught on video verbally abusing an African American male with no possible reason other than the color of his skin.” The lawsuit said the woman was motivated primarily by fear during the exchange, not by race.

In a response to the lawsuit, Franklin Templeton said, “We believe the circumstances of the situation speak for themselves and that the company responded appropriately. We will defend against these baseless claims.”

Last May, the company said it conducted an internal review of the incident and decided to terminate her, saying “We do not tolerate racism of any kind at Franklin Templeton.”

Immediately after the incident went viral, Amy Cooper apologized in comments to CNN and said she did not mean harm.

Before the misdemeanor charges against Amy Cooper were dropped, though, prosecutors revealed she called 911 a second time, not filmed in Christian Cooper’s video, and falsely reported “an African American man ‘tried to assault’ her.”

As part of the agreement to dismiss the case against her, Assistant District Attorney Joan Illuzzi told a judge that Amy Cooper completed five therapy sessions that “focused on the ways in which Ms. Cooper could appreciate that racial identities shape our lives but we cannot use them to harm ourselves or others.”

Amy Cooper could have faced up to a year in prison if convicted of the class A misdemeanor.

Prosecutors said her calls to police could have endangered Christian Cooper. “Certainly, he would have been held and held forcibly if he resisted,” Illuzzi said when charges were dropped.

The lawsuit also alleges Christian Cooper had previously confronted another dog owner about leashing their pet.

Christian Cooper declined to comment to the Associated Press on the lawsuit filed by Amy Cooper.

The birdwatcher did not participate in the criminal prosecution against Amy Cooper and has said he does not think the exchange should have ruined Amy Cooper’s life to the extent it has.

“I think it’s a mistake to focus on this one individual,” he wrote in the Washington Post in July. “The important thing the incident highlights is the long-standing, deep-seated racial bias against us Black and brown folk that permeates the United States — bias that can bring horrific consequences, as with the killing of George Floyd in Minneapolis later the same day I encountered Amy Cooper, or just small daily cuts.”