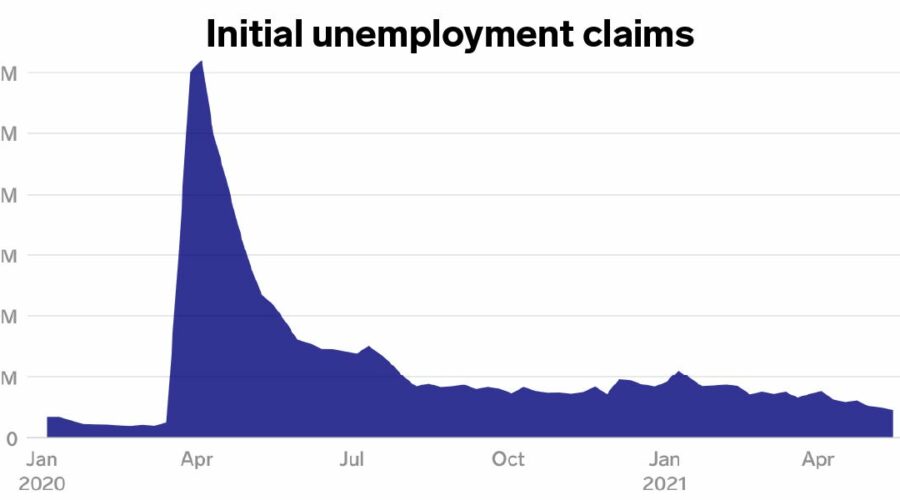 New jobless claims totaled an unadjusted 444,000 last week, the Labor Department announced Thursday morning. The median estimate from economists surveyed by Bloomberg was for a modest jump to 450,000 claims. The reading marked a third straight decline and placed claims at a new pandemic-era low.

Continuing claims, which track Americans receiving unemployment benefits, jumped to 3.75 million for the week that ended May 8. That’s above the median estimate of 3.63 million.

Claims have landed below 500,000 for two consecutive weeks after trending above 700,000 through most of 2021. The steady decline suggests hiring picked up in May as the country reversed lockdown measures. The CDC’s recent guidance on relaxing mask-wearing marks the most significant step yet toward a post-pandemic normal and stands to drive more demand as Americans release pent-up demand.

Roughly 3.5 million workers are at risk of losing their federal unemployment benefits as Republican governors prematurely cut the boost. Democrats’ March stimulus package extended a $300-per-week supplement to federal UI until September, yet 22 GOP-led states are ending the benefit this summer.

While Democrats argue the boost is critical for supporting Americans still struggling through the COVID-19 recession, Republicans have blamed the benefit for disincentivizing work.

“Unemployment benefits are never set at a high enough rate to replace wages. We’ve replaced the wages. That should have ended at the 600-level months ago, and it hasn’t,” Sen. Ron Johnson of Wisconsin told Insider on Wednesday.

The unused UI funds could still go toward healing the labor market. Republican Sen. Shelley Moore Capito suggested on Wednesday that cash left unused by some states could be used to pay for President Joe Biden’s jobs initiative.

“Why don’t we repurpose those dollars to help those folks coming off unemployment get work in an infrastructure plan,” Capito told Bloomberg. “It sounds like a good win-win situation for those dollars.”

Such a proposal would reuse billions of dollars for the American Jobs Act. But with Republicans countering Biden’s offer and balking at the president’s tax-hike proposals, the White House faces an uphill battle to enact its $2.3 trillion jobs package.