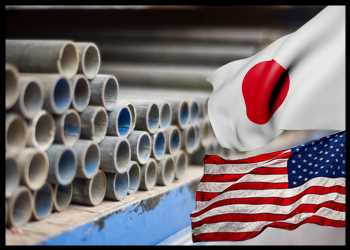 The United States has reduced the 25 percent extra tariff on steel imports from Japan that was imposed by the Trump administration.

Under the new 232 tariff agreement reached with Japan on Monday, around 1.25 million metric tonnes of Japanese steel products will be allowed to enter the U.S. market a year without the application of Section 232 tariffs.

Announcing the deal, Secretary of Commerce Gina M. Raimondo said it will strengthen the United State’s steel industry and ensure its workforce stays competitive, while also providing more access to cheaper steel and addressing a major irritant between the U.S. and Japan, one of its most important allies.

“Today’s announcement builds on the deal we struck with the EU and will further help us rebuild relationships with our allies around the world as we work to fight against China’s unfair trade practices,” she added.

The agreement will come into effect on April 1.

The two sides will review the agreement on an annual basis, including in light of changes in the global steel and aluminum markets, U.S. demand, and imports.

The 10 percent additional aluminum tariff on imports from Japan, which the Trump administration introduced along with the steel tariff in 2018, will remain in place.

The amount of steel that Japan exports to the United States has fallen considerably after the Trump-era additional tariff.