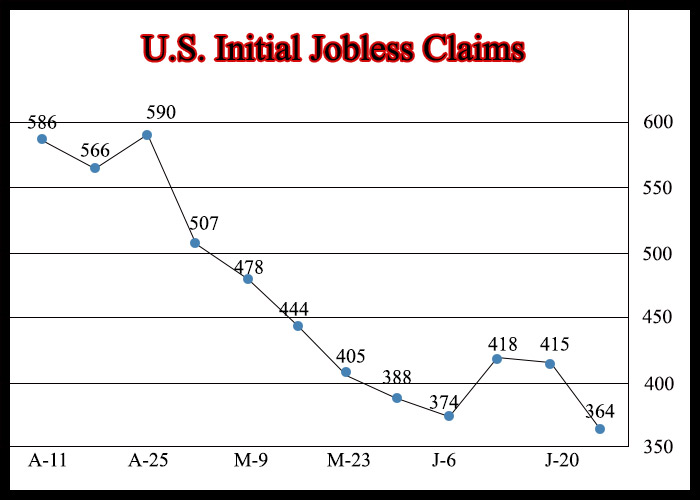 A day ahead of the release of the more closely watched monthly jobs report, the Labor Department released a report on Thursday showing first-time claims for U.S. unemployment benefits fell by more than expected in the week ended June 26th.

Economist had expected jobless claims to dip to 393,000 from the 411,000 originally reported for the previous week.

With the bigger than expected decrease, jobless claims fell to their lowest level since hitting 256,000 in the week ended March 14, 2020.

The Labor Department said the less volatile four-week moving average also dipped to its lowest level in over a year, edging down by 6,000 to 392,750 from the previous week’s revised average of 398,750.

Meanwhile, the report showed continuing claims, a reading on the number of people receiving ongoing unemployment assistance, rose by 56,000 to 3.469 million in the week ended June 19th.

“We look for the labor market recovery to gather momentum in the months ahead as constraints on labor supply recede and expect continuing claims will fall more sharply as the pace of hiring picks up,” said Nancy Vanden Houten, Lead Economist at Oxford Economics.

On Friday, the Labor Department is scheduled to release its closely watched report on the employment situation in the month of June.

Economists currently expect the report to show employment jumped by 690,000 jobs in June after surging up by 559,000 jobs in May. The unemployment rate is expected to dip to 5.7 percent from 5.8 percent.