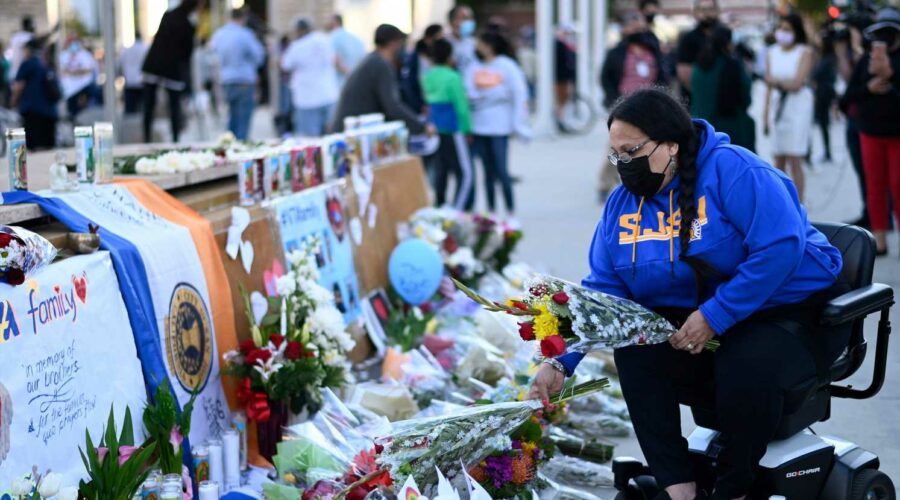 Five years ago, U.S. Customs and Border Protection detained the suspected gunman in Wednesday’s shooting spree in San Jose and found that he expressed hatred of the rail yard where he worked and is now accused of killing nine people.

In 2016, U.S. Customs and Border Protection stopped the suspect, Samuel James Cassidy, on a trip back from the Philippines.

An officer found Cassidy had “books about terrorism and fear and manifestos … as well as a black memo book filled with lots of notes about how he hates the VTA,” according to a Department of Homeland Security memo from the stop obtained by The Wall Street Journal.

When he was asked if he had problems with anyone at work, Cassidy said, “no,” according to the memo.

A Biden administration official said he saw the memo and confirmed its contents to The Associated Press.

A spokesperson for the Department of Homeland Security declined to comment on the memo to USA TODAY. The Santa Clara County Sheriff’s Office, which is leading the investigation into the shooting, did not respond to repeated questions about whether they were notified about the 2016 stop or investigated Cassidy afterward.

Here’s what we know Friday:

The contents of the memo align with the picture law enforcement has painted so far of a man who appears to have kindled hatred against the people he worked with for a decade.

As Cassidy gunned down nine other employees before taking his own life, witnesses say he targeted specific people.

Sheriff Laurie Smith said Cassidy told at least one person “I’m not going to shoot you,” before shooting others.

“So I imagine there was some kind of thought on who he wanted to shoot,” Smith said.

‘They did not wait’: Officers rushed into San Jose rail yard as gunshots were still ringing out, authorities say

Kirk Bertolet, a signal maintenance worker who worked in a separate unit from Cassidy, told the Associated Press that the suspect didn’t hurt people he encountered on the way to the second building, where more shots were fired.

“Sam made sure he killed all who he wanted. He made sure they were dead,” Bertolet said. “I watched some of my coworkers breathe their last breaths, and they were all gone. Seven of them were just gone.”

Bertolet called Cassidy an “outsider,” saying, “He was never in the group. He was never accepted by anybody. You look back and you go, ‘yeah, it fits.'”

28/05/2021 Business Comments Off on San Jose gunman was reportedly questioned over hatred of workplace; coworker says he was an ‘outsider’: What we know
Markets