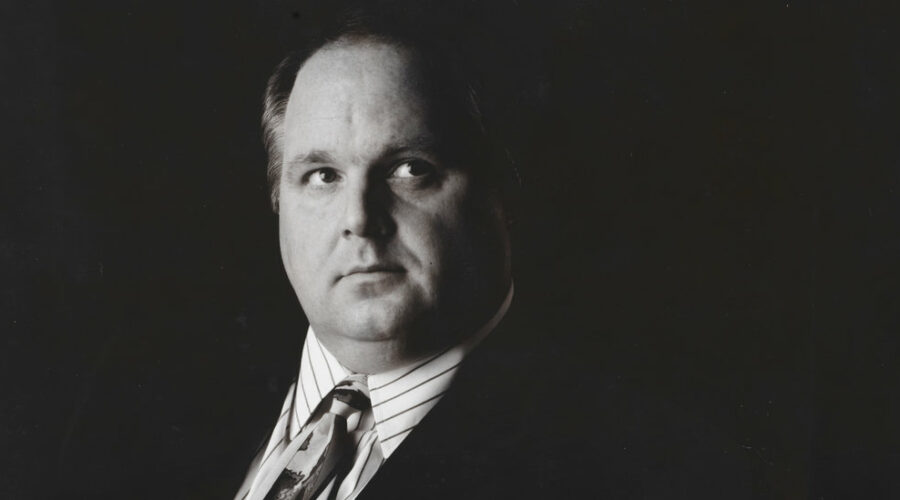 Rush Limbaugh, the relentlessly provocative voice of conservative America who dominated talk radio for more than three decades with shooting-gallery attacks on liberals, Democrats, feminists, environmentalists and other moving targets, died on Wednesday. He was 70.

His wife, Kathryn, announced the death at the beginning of Mr. Limbaugh’s radio show.

“I know that I am most certainly not the Limbaugh that you tuned in to listen to today,” she said before adding that Mr. Limbaugh had died of lung cancer that morning.

He had announced on his show last February that he had advanced lung cancer. A day later, President Donald J. Trump awarded him the Presidential Medal of Freedom, the nation’s highest civilian honor, during the State of the Union address.

Mr. Limbaugh soon resumed his broadcasts, and his adoration for Mr. Trump. As the Covid-19 pandemic swept the nation, he likened the coronavirus to the common cold. And in October, as Election Day neared and Mr. Trump recuperated from the virus himself, he joined Mr. Limbaugh on the air for a two-hour “virtual rally,” largely devoted to his grievances.

“We love you,” Mr. Limbaugh assured the president on behalf of his listeners. But 10 days later, Mr. Limbaugh told his audience that his cancer had grown worse and, despite treatments, was “going in the wrong direction.”

Mr. Limbaugh had been a divisive darling of the right since launching his nationally syndicated program during the presidency of his first hero, Ronald Reagan. Using often misogynistic and racist language and trafficking in conspiracy theories, he pushed conservative talk radio into extreme right-wing territory while building a regular audience of as many as 15 million Americans.

That following, and his drumbeat criticisms of President Barack Obama for eight years, when the Republicans were often seen as rudderless, appeared to elevate him, at least for a time, to de facto leadership among conservative Republicans.

Such talk became obsolete in 2016 with the meteoric rise of Mr. Trump, who, after several flirtations with presidential races that were never taken very seriously, suddenly burst like a supernova on the national political landscape. Mr. Trump became president and Mr. Limbaugh, off the hook, became an ardent supporter.

“This is great,” Mr. Limbaugh, sounding positively giddy, said of his new champion in the White House. “Can we agree that Donald Trump is probably enjoying this more than anybody wants to admit or that anybody knows?”

As for opposition to the Trump agenda and allegations of Russian interference in the American elections in 2016, Mr. Limbaugh had a ready explanation.

“This attack is coming from the shadows of the deep state, where former Obama employees remain in the intelligence community,” he said. “They are lying about things, hoping to make it easier for them and the Obama shadow government to eventually get rid of Trump and everybody in his administration.”

Blisteringly sarcastic and always pugnacious, Mr. Limbaugh was a partisan force of nature, reviled by critics and admired by millions, a master of three-hour monologues that featured wicked impersonations, slashing mockery, musical parodies and a rogues’ gallery of fools, knaves, liars and bleeding hearts.

He was not above baldfaced lies. During the debate over Mr. Obama’s 2009 health care bill, he fed the rumor mills over its provisions to have Medicare and insurers pay for optional consultations with doctors on palliative and hospice care, saying they empowered “death panels” that would “euthanize” elderly Americans.

Unlike Howard Stern, Don Imus and other big names in shock radio, Mr. Limbaugh had no on-the-air sidekicks, though he had conversations with the unheard voice of someone he called “Bo Snerdly.” Nor did he have writers, scripts or outlines, just notes and clippings from newspapers he perused daily.

Alone with his multitudes in his studio, he joked, ranted, twitted and burst into song, mimicry or boo-hoos as “The Rush Limbaugh Show” beamed out over 650 stations of the Premier Radio Networks, a subsidiary of iHeartMedia (formerly Clear Channel Communications). In his alternate-universe-on-the-air, he was “El Rushbo” and “America’s Anchorman,” in the “Southern Command” bunker of an “Excellence in Broadcasting” network.

To faithful “Dittoheads,” his defiantly self-mocking followers, he was an indomitable patriot, an icon of wit and wisdom — Mark Twain, Father Coughlin and the Founding Fathers rolled into one. His political clout, they said, lay in the reactions he provoked, avalanches of calls, emails and website rage, the headlines and occasional praise or wrath from the White House and Capitol Hill.

To detractors he was a sanctimonious charlatan, the most dangerous man in America, a label he co-opted. And some critics insisted he had no real political power, only an intimidating, self-aggrandizing presence that swayed an aging, ultra-right fringe whose numbers, while impressive, were not considered great enough to affect the outcome of national elections.

In any case, he was a commercial phenomenon, taking in $85 million a year. Married four times and divorced three times with no children, he lived on an oceanfront estate in a 24,000-square-foot mansion. It featured Oriental carpets, chandeliers and a two-story mahogany-paneled library with leather-bound collections. He had a half-dozen cars, one costing $450,000, and a $54 million Gulfstream G550 jet.

Dropping $5,000 tips in restaurants, affecting the grandiloquence of a proud college dropout, he was himself easily caricatured: overweight all his life, sometimes topping 300 pounds, a cigar smoker with an impish grin and sly eyes, the stringy hair slicked back from a mastodon forehead. He moved his bulk with surprising grace when showing how an environmentalist skips daintily in a woodland. But his voice was his brass ring — a jaunty, rapid staccato, breaking into squeaky dolphin-talk or falsetto sobbing to expose the do-gooders with his inventive but bruising vocabulary.

A full obituary will appear soon.