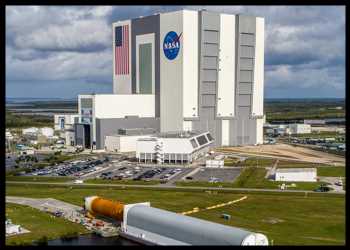 The recently released Kennedy Economic Impact Report for Fiscal Year 2021 reveals data about how much the center’s spaceport economy affects Brevard County and the state of Florida. The report is issued every two years by the center’s Office of the Chief Financial Officer (OCFO).

“Launching rockets and exploring space is no longer a government-only endeavor,” said Center Director Janet Petro. “As a multi-user spaceport, Kennedy has more than 90 private-sector partners and nearly 250 partnership agreements. NASA is leading the way in fostering a commercial market in low-Earth orbit and opening up space to everyone, and that creates tremendous economic benefits here on planet Earth,” she added.

The report shows that the 12,312 employees at the spaceport generated 27,004 Florida jobs through secondary rounds of spending by workers and suppliers.

“Even during the pandemic, Kennedy continued to be a strong contributor to the county and its surrounding areas,” said Matthew Wilson, supervisor of the Business Services and Cost Assessment Branch in the OCFO. “For example, spaceport operations had a direct economic impact of $2.89 billion in sales on Florida’s economy. Every dollar spent at Kennedy ultimately resulted in $1.82 back into Florida’s economy,” according to him.

Kennedy’s labor income is $2.03 billion, which translates to an economic output in Florida of $5.25 billion. In FY2021, the direct result was $1.51 billion in gross domestic product for Florida’s economy. Factoring in additional impacts, the spaceport ultimately generated a total of $2.77 billion for Florida’s economy, according to the Economic Impact Report.

Between 2019 and 2021, commercial launch providers increased their workforce by 2,744 jobs, representing a large growth spurt.