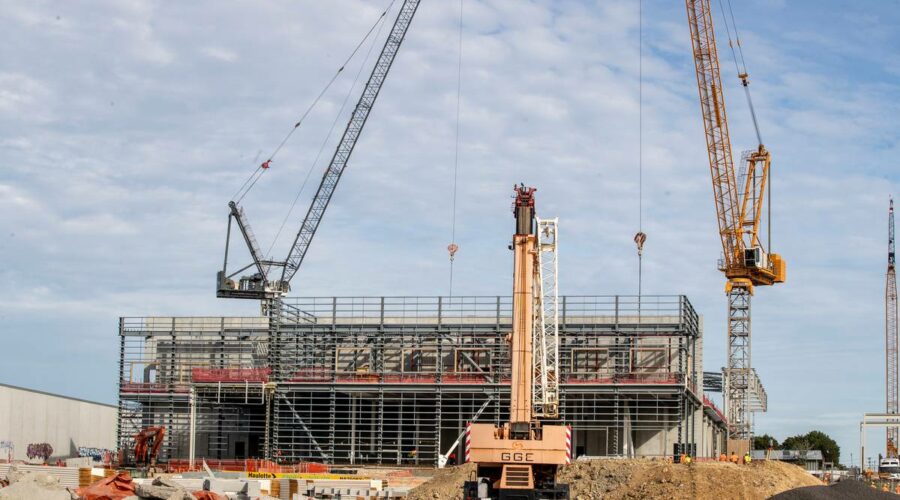 The two northwestern projects are at Westgate where one alone is worth around $100m+ and two others are worth $600m-plus.

The first two new buildings are on Kakano Rd off Gunton Dr, Westgate.

In January, the Herald reported DCI Data Centers planned to spend $600 million on two new facilities – one at Westgate, the other at Albany.

The pandemic has accelerated a boom in cloud computing or using software and services over the internet, from the likes of Zoom and Slack to Netflix and multiplayer games.

In February, the Herald reported how Auckland’s multibillion-dollar data centre boom kept getting bigger with Amazon saying it will launch a new AWS (Amazon Web Services) Local Zone in Auckland, with Netflix and potentially TVNZ and Spark as anchor customers.

Hawkins won the head contract to build the first new Microsoft project worth more than $100 million.

That building is the most advanced of the three, its superstructure up and a tower crane on that site which has a pre-cast concrete facility on the street-front.

Naylor Love won the second contract to build the new DCI Data Centers project nearby but that building is less advanced.

Neither of the builders wanted to discuss the projects, citing client confidentiality.

One building chief revealed that a non-disclosure agreement had been signed and that meant utterly no conversations with the media about the project.

DCI Data Centers has also been reported as building a second centre in Auckland for around $600m, this time at Albany.

Data centres like to keep their hubs private for various reasons. Data centres are famed for the amount of electricity they consume, largely through air conditioning to cool servers.

But in the US, Microsoft has had a focus on solar power and other clean energy solutions and the company has set the goal of becoming carbon-neutral by 2030.

Both new Westgate data buildings are on the opposite side of Kakano Rd from the new Costco fuel depot where from last Tuesday, 26 browsers began dispensing petrol and diesel for around 20c to 30c below prices elsewhere.

Costco’s temporary membership office is on the same side of the road as its new fuel station. Staff from Australia have also been working at that office in the last few days after they arrived here last Monday for Tuesday’s fuel station opening event.

The Herald reported last year that Microsoft had bought land for more than $100m.

“It signals to the world that NZ is open for business and quality investment. Microsoft wouldn’t be investing here if they didn’t have full confidence in the New Zealand economy and saw us as a safe place for operation in both the health and business sense,” Ardern said in May 2020 just after the pandemic broke out here.

Microsoft has about 100 data centres worldwide but has never had one here, so its choice of site is significant.

Last June, the Herald reported DCI Data Centres’ project being part of a sudden boom in these types of buildings.

They were clustered around Auckland’s northwest.

Malcolm Roe, DCI chief executive, said the Westgate project will be just the start of his company’s NZ push.

“This site is the first step for us in New Zealand and we are currently finalising a selection of further sites to meet strong demand,” Roe said last June.

“Increasing cloud use in New Zealand is driving the demand for several high-capacity, environmentally-friendly data centres and other related infrastructure within the country. We are pleased to be playing a key role in the development of this vital part of the digital economy.” His company targets corporate and government customers.”

He anticipated two or three more data centres would be built on this side of the Tasman.

Stage 1 of the Westgate build was budgeted at $70m. More stages would be added in what would become a 10 megawatt facility (supermassive or “hyperscale” data centres are typically described by power load of their IT systems), the Herald reported last year.

Roe would not put a price tag on the total build at Westgate, but server farms typically costs in the hundreds of millions.

The CEO said New Zealand appealed because more than 80 per cent of our power is from hydro sources. His company would look at options to go further green by “closing that 20 per cent gap” but they would not include solar panels – because it would take 15 hectares of solar panels to power a 10mw server farm.

Having Costco, Microsoft and DCI means Gunton has secured three of the world’s top corporations on his site which also has New Zealand’s largest Bunnings as well as the largest Pak’nSave.