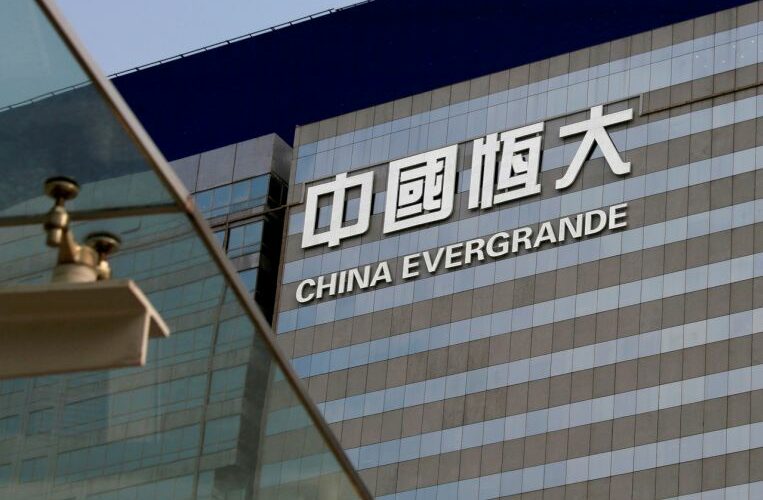 Mr Hui had long been able to count on his poker pals to back China Evergrande Group during times of trouble, whether it was by buying stakes in his company, loading up on its bonds or not calling in debts.

He broadened that circle to raise funds for his property services business in December, as well as an electric vehicle (EV) start-up in January.

The sharp reversal in shares of Evergrande and its units means Mr Hui’s friends are now facing potentially punishing losses.

The developer’s shares have tumbled about 70 per cent this year, while Evergrande Property Services Group is 34 per cent below its initial public offering (IPO) price.

Strategic investors who spent a combined US$3.4 billion (S$4.6 billion) buying shares in China Evergrande New Energy Vehicle (NEV) Group in its January placement have seen the value of their investments plunge more than 70 per cent. They have been unable to sell due to a lock-up agreement.

Evergrande sold another US$1.4 billion of the shares in the open market in May to undisclosed investors.

Concern that the company will need to sell assets at a steep discount is fuelling declines in its listed subsidiaries. The world’s most indebted developer has total liabilities of US$300 billion.

Here is a look at how some Evergrande investors are doing now.

Back in January, Mr Hui sold HK$26 billion (S$4.5 billion) of stock in Evergrande’s green car unit to six investors, subject to a 12-month lock-up period. The placement, which came amid a global craze for electric vehicle makers and surging equity markets, helped trigger a more than 50 per cent rally in the shares the day after the news. The investors bought the shares at HK$27.30 each. They closed at HK$6.50 last Friday.

– Mr Chen Hua, the chairman of Kingkey Group, who personally put HK$5 billion into the EV start-up through a unit, according to a filing.

Evergrande’s property management arm raised HK$14.3 billion in its Hong Kong IPO in November, pricing in the lower half of its marketed range. The offering included a staggering 23 cornerstone investors. While these investors were allowed to sell after June 2, other stakeholders will be locked up until Dec 2.

Three of the strategic investors in the NEV placement were also anchor investors in the property services unit, according to filings and term sheets seen by Bloomberg. Chinese Estates’ Ms Chan was the biggest backer of the pre-listing funding round, subscribing to 5 per cent of the shares, while Kingkey bought HK$236 million. Centralcon Group’s controlling founder made a HK$200 million investment.

Some of Hui’s closest allies are from a group with whom he shares a fondness for a Chinese poker game. Known as the Big Two Club for the game’s name, the clan includes Chinese Estates’ Mr Lau, New World Development’s Mr Henry Cheng and C C Land’s Mr Cheung Chung Kiu. They have done numerous transactions over the years and are so interconnected that any default by Evergrande would have repercussions for their businesses.

Chinese Estates swung to a loss in the first half of the year due to the drop in income from Evergrande, which cut its annual dividend in March and later decided against a special payout. The paper loss of its Evergrande stock holdings amounted to HK$4.11 billion. Chinese Estates shares trade near their lowest level since 2004.

China Strategic Holdings, an investment firm backed by New World’s Mr Cheng, said in a statement last Friday it holds 133.6 million China Evergrande NEV shares. Based on the last closing price of the EV maker, its stake is worth about HK$868 million, compared with its investment value of HK$3.9 billion. China Strategic also sold Evergrande bonds for a loss of $4.7 million, according to a statement last Tuesday.

C C Land said in its interim report that its stake in Evergrande’s EV unit was worth more than 5 per cent of its total assets, its largest investment by that measure.

Billionaire Zhang Jindong lost control of the retail arm of his Suning empire when it received a state-backed bailout last month. Concern over his group’s cash flow flared in September, when Mr Zhang waived his right to a 20 billion yuan payment from Evergrande. The decision helped his friend Hui save his own company but made little financial sense to investors.

It is not just wealthy individuals feeling the pain. Shenzhen Investment, a listed property developer controlled by the Shenzhen government, said the value of its Hengda Real Estate Group fell about HK$833 million in the first half. As at June 30, the stake was worth about 4 per cent of its total assets, according to a statement to the Hong Kong stock exchange.

Asia Orient Holdings, led by secretive tycoon Poon Jing, disclosed last month it amassed Evergrande bonds with a face value of US$1 billion, according to an exchange filing, including bonds it bought for US$230 million over the past year. At the time of the announcement, Mr Poon’s company and its affiliates were sitting on unrealized losses on disclosed holdings, given Evergrande bonds traded near record lows, according to data compiled by Bloomberg.