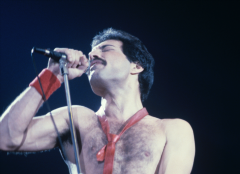 Queen’s Brian May and Roger Taylor this weekend confirmed to the BBC that the band would be releasing a new song featuring the band’s late, legendary frontman, Freddie Mercury, called “Face It Alone.”

Taylor called it, “a little gem from Freddie,” culled from the sessions for their 13th studio album, The Miracle, which was released in 1989. Mercury died two years later.

Taylor said in the interview that they’d “kind of forgotten about” the tune, calling it “wonderful” and “real discovery.”

He then teased, “I think it’s going to be out in September.”

May added, “It was kind of hiding in plain sight. We looked at it many times and thought, ‘Oh no, we can’t really rescue that.’ But in fact, we went in there again and our wonderful engineering team went, ‘Okay, we can do this and this.’ It’s like kind of stitching bits together…But it’s beautiful. It’s touching.”

In its 1989 review, Rolling Stone called The Miracle too “bogged down by synthesizers and pinging drum machines.” But, the magazine’s review lauded the lead singer’s contributions.

“Basically, The Miracle is a showcase for Freddie Mercury and his love of sweeping, quasi-operatic vocals. And indeed, Mercury — especially on the title track — has never sounded better,” reads the review.

That’s one good sign for fans anticipating “Face It Alone.”