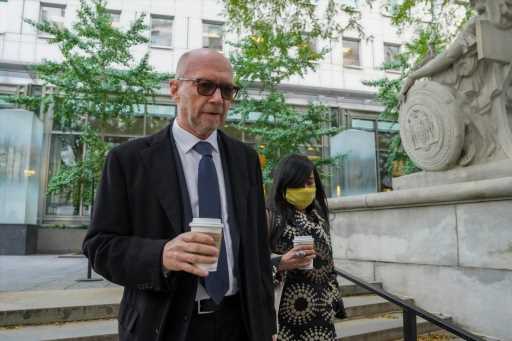 Paul Haggis had an “awkward one-night stand” in 2013 with an infatuated young woman, Haleigh Breest, who wanted more intimacy from the Oscar-winning filmmaker and, when there was none, made up a rape allegation for a #MeToo-adjacent 2017 lawsuit that has “utterly destroyed him,” a lawyer for Haggis told jurors Wednesday in the three-hour first closing argument of the New York sexual assault civil trial.

“There are three ‘R’ words that happened here: rejection, regret and revenge,” said the lawyer, Priya Chaudhry. “And none of these ‘R’ words are rape.”

Breest was, in Chaudhry’s portrayal, a liar who wanted the affections of a famous, accomplished man, and as it dawned on her that he wasn’t interested and had moved on, she shopped different versions of the encounter to different friends and ultimately to lawyers as part of a plan to “get even” — to quote one of her texts — and shake Haggis down for money.

Chaudhry appealed to the jurors as skeptical, common-sensical New Yorkers to ask whether Breest was, as she testified, the victim of “an extremely violent rape” when she didn’t report it to police and kept the un-damaged but reportedly semen-stained tights that she wore that night as evidence.

She said the DNA testing produced no conclusive evidence of any semen belonging to Haggis, and she asked jurors to consider why they haven’t seen those tights, even though Breest’s lawyers have shown them her dress and sweater from that night.

She also said she expected that Breest’s lawyers, when they deliver their closings, will invoke the name “Harvey Weinstein” often.

In a closing that lasted more than three hours, Chaudhry said the proof that no rape occurred is in Breest’s own words — the confiding emails and texts she sent to friends in the first hours and days after she spent a night at Haggis’ apartment in Manhattan. Breest, then 26, was working as a publicist at a movie-screening party that Haggis, then 59, attended as a VIP guest, and they went back to his home afterward. Breest has testified that Haggis repeatedly forced himself on her there despite her protests and efforts to escape.

Breest afterward texted a friend about feeling “sick” from the amount of oral sex she had given Haggis hours earlier, and the friend, Lyudmila Bouzinova, replied with a “lol” in exchanges dotted with “lols” and quips about older men and the Church of Scientology — Crash and Million Dollar Baby Oscar winner Haggis, then 59, had publicly quit the church in 2009 — and the risks of going home with someone you’re not dating when you’re “drunky-poo.”

Breest and Bouzinova both testified that they spoke on the phone before they texted and Breest described what happened to her as nonconsensual.

Chaudhry emphasized that Bouzinova, in her first deposition for the case more than two years ago, said Breest was burdened by “an overwhelming sense of, like, not being sure” that the two had had sex. Haggis has testified that all he remembers before going to sleep was consensual oral sex initiated by Breest. Addressing a text from Bouzinova to Breest calling the sex “borderline rape,” Chaudhry argued that if Breest had really told her friend what she told this court about what had happened, her friend would have called it “rape,” with no qualifications, at that time.

Chaudhry also questioned the testimony of four women from Canada who testified as Jane Does that Haggis either raped or attempted to assault them in separate incidents between 1996 and 2015. (Deadline is not identifying them.) Chaudhry said all four women told lies in their testimony and that none showed any proof that Haggis was capable of destroying their nascent careers in film and television, or even tried.

She countered with the women who testified for Haggis. “What you learned from these women is that when Paul Haggis makes a pass at you, and you reject him, what happens next most likely is that he’s going to teach you how to play backgammon,” she said. “You’re going to become one of his best friends.”

Chaudhry said that Haggis’ fear of a Scientology reprisal is legitimate given the church’s history of retaliating against vocal ex-members through litigation and covert operations, and that jurors should consider the “strong circumstantial evidence” of a possible church role in bringing accusers forward even if they have seen no direct evidence of it.

She added: “Regardless of whether Scientology was in this courtroom, Haleigh Breest was not a credible witness. Those are two separate things.”

Facebook Parent Meta Says It Will Lay Off 11,000 Staff And Reduce Workforce By 13%