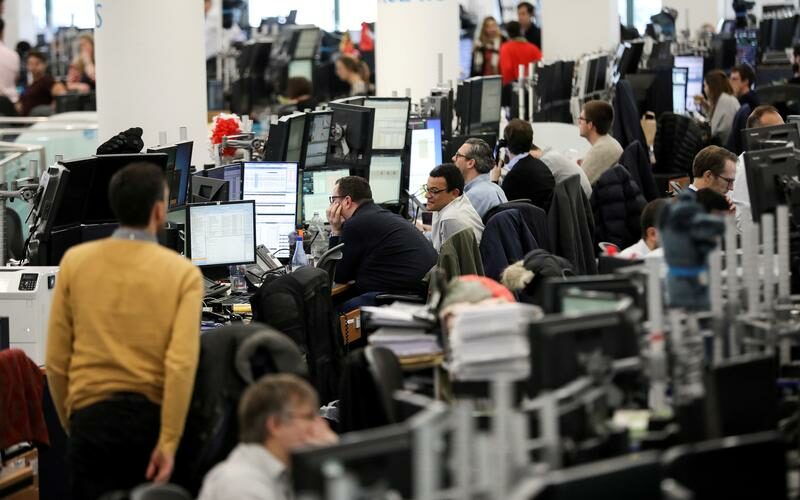 LONDON (Reuters) – Global mergers and acquisitions hit new record highs in the third quarter as companies and investors shaped their post-COVID future through transformative deals while their advisers struggled to cope with transaction volumes never seen before.

A frantic summer of merger activity produced deals worth $1.52 trillion in the three months to Sept. 27, up 38% from the same quarter last year and more than any other quarter on record, according to Refinitiv data.

Third-quarter volumes drove global M&A activity in the first nine months of 2021 to an unprecedented record of $4.33 trillion, overtaking an all-time annual peak of $4.1 trillion hit before the financial crisis in 2007 and forcing investment banks to hike pay for overworked and disgruntled junior staff.

“The path to recovery is increasingly clear and people are looking beyond COVID,” said Birger Berendes who co-heads M&A in EMEA at Bank of America.

“Investors are flush with cash and want companies to look for acquisitions in areas where they need to grow or add capabilities and services rather than just paying dividends or buying back shares.”

Third-quarter volumes doubled in Europe with $473 billion worth of M&A deals compared with the same quarter last year while the United States was up 32% to $581 billion and Asia Pacific rose 21% to $365 billion.

“M&A is a confidence game. Both corporates and sponsors feel very good about the current environment and that’s why they are aggressively pursuing opportunities before there is a market correction,” said Dirk Albersmeier, global co-head of M&A at JPMorgan.

“Investors are sensitive about factors like inflation, interest rate developments and increased regulatory scrutiny,” he added.

While U.S. President Joe Biden’s upcoming tax reforms are likely to increase the cost of doing deals, top M&A bankers said they do not expect a slowdown in deal-making in the near term.

“The new tax policy is not even a discussion point. Not impacting deals, whatsoever – probably a reflection on how people feel about the likelihood that it’s going to come into fruition next year,” said Mark Bekheit, an M&A partner at law firm Latham & Watkins LLP.

While the market for blank-cheque companies has faced headwinds, a $32.6 billion SPAC deal led by Lionheart Acquisition Corp II for U.S. firm MSP Recovery topped up the quarterly charts.

Progress made by Western economies to vaccinate their adult population and the easing of COVID restrictions during the summer fuelled animal spirits with bidding wars erupting among private equity firms for control of listed companies including British supermarket group Morrisons.

Private equity buyouts surged 133% to $818 billion in the first nine months of the year as investment firms rushed to deploy cash, often paying rich prices to take assets off the public markets.

Bankers say private equity firms have learnt how to calculate risk after the financial crises.

“There is a clear recognition that valuations are very high at the moment. Funds are pursuing opportunities where they have conviction they can add value,” said Anna Skoglund, head of Goldman Sachs’ financial and strategic investor group in EMEA.

“We have moved away from opportunistic, more financially driven transactions to thematic investing and platform building.”

“You’ve got an incredibly hospitable fixed-income market in terms of rates and availability. So there’s plenty of opportunity to do deals.”

Deal-making surged in most sectors of the economy, especially the technology industry – where software deals more than tripled in the first nine months of the year – as well as energy and power with companies accelerating their move into renewables projects as part of their transition to a net-zero future.

“Boards continue to assess multiple options to implement their strategic objectives. Clients are being very thoughtful about using M&A to accelerate their strategy where they see the opportunity to do so,” said Omar Faruqui, co-head of EMEA M&A at Barclays.

As the threat of activist shareholders resurfaces, bankers say the pipeline ahead will also include spinoffs to unlock value trapped in profitable units and take advantage of buoyant stock markets.

Activist funds are carefully watching how companies are navigating the challenges of adjusting their business models to the post-COVID world and will be a key factor in driving change.

“Market dislocations cause a decline in activism. Not surprisingly, when the pandemic hit you saw a real pullback,” said Morgan Stanley’s David Rosewater, a managing director of the activist defense group.

“As the market came back, you saw activism come back and reward additional opportunities.”