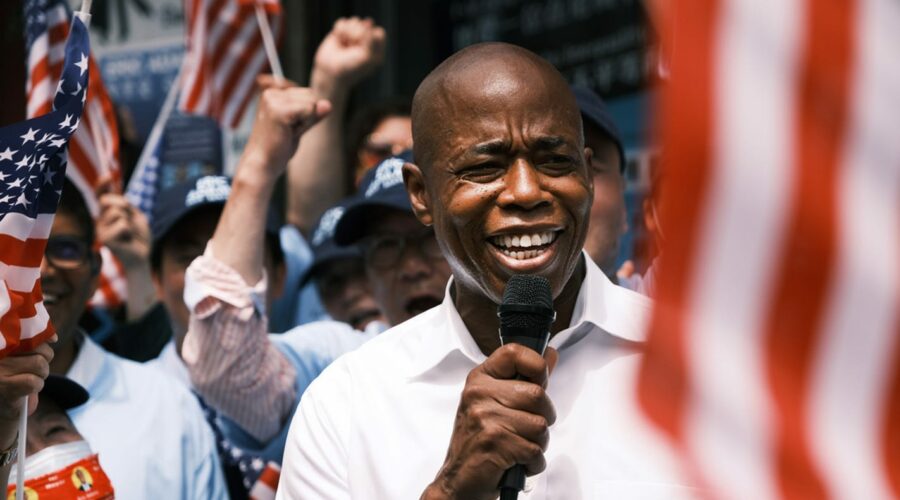 NEW YORK – A leading candidate in the race for mayor of New York City is facing heat from his opponents after a report made it unclear whether he lives full time in the Big Apple.

Eric Adams, who is the Brooklyn Borough President and front-runner for the Democratic mayoral primary June 22, shot down allegations Wednesday he didn’t live in New York, commuted from a co-op he co-owned with his partner in Fort Lee, New Jersey, and was misusing a government building as a campaign office.

The controversy erupted after Politico published a story detailing discrepancies between Adams’ property and campaign records and the late nights he had been spending at his government office in Brooklyn Borough Hall.

In turn, Adams welcomed a handful of reporters to his apartment in the Bedford-Stuyvesant neighborhood, touring the rooms of the basement unit and showing them his fridge.

“How foolish would someone have to be to run to be the mayor of the city of New York and live in another municipality,” Adams told the reporters who gathered, according to Politico and The New York Times.

A peak inside the fridge

The salmon and other non-vegan items are his son’s, according to his campaign team pic.twitter.com/McmhVEfIZa

New York City mayoral race: What to know about the candidates, issues

The story quickly became campaign fodder for Adams’ opponents. Andrew Yang, who has faced his own attacks, including from Adams, about whether he is a “true” New Yorker, tweeted, “I don’t think he lives there,” after the apartment tour.

His campaign managers released a list of questions for Adams, asking whether he would release his EZPass records, which would indicate toll crossings, why he had done virtual candidate forums from the Borough Hall and how traffic was in Fort Lee.

The campaign for another competitor, Maya Wiley, released its own questions earlier in the day, asking about paying rent for a campaign office.

According to the Politico story, Adams moved into Brooklyn Borough Hall last March as he was dealing with the COVID-19 pandemic, but he has routinely been observed entering at midnight and not leaving until the next morning as recently as last week. Politico also reported his schedule in his official capacity as Borough President has remained light as he’s used the building late into the evening.

Adams is registered to vote at the Bedford-Stuyvesant rowhouse he owns but in a first floor unit. Adams showed reporters a basement unit, and Politico reported a tenant has lived on the first floor for years. Evan Thies, a campaign spokesperson, told the news outlet the discrepancy is because of recent renovations.

The apartment tour also led some Twitter users, including from opponent campaigns, to tweet a past photo of Adams’ fridge and compare it to the one shown to reporters Wednesday. Some noted the fridge in Bedford-Stuyvesant contained sausage even though Adams is vegan. Adams said some of the food was his son’s.

Adams also owns a co-op in Brooklyn’s Prospect Heights, which has been listed on campaign documents, and the co-op in Fort Lee, Politico reported. Thies told Politico Adams did occasionally stay overnight in New Jersey before the pandemic but stopped regularly crossing state lines since the pandemic.

Politico reported Adams’ backgrounds during virtual candidate forums, which have been a staple of the mayor’s race, changed regularly. The New York Times, citing opposition research, reported Adams had called in from New Jersey at least seven times.

Recent polling has shown Adams as the favorite to win the primary, less than two weeks away. However, this year’s election will feature ranked choice voting, allowing voters to pick their top five candidates.