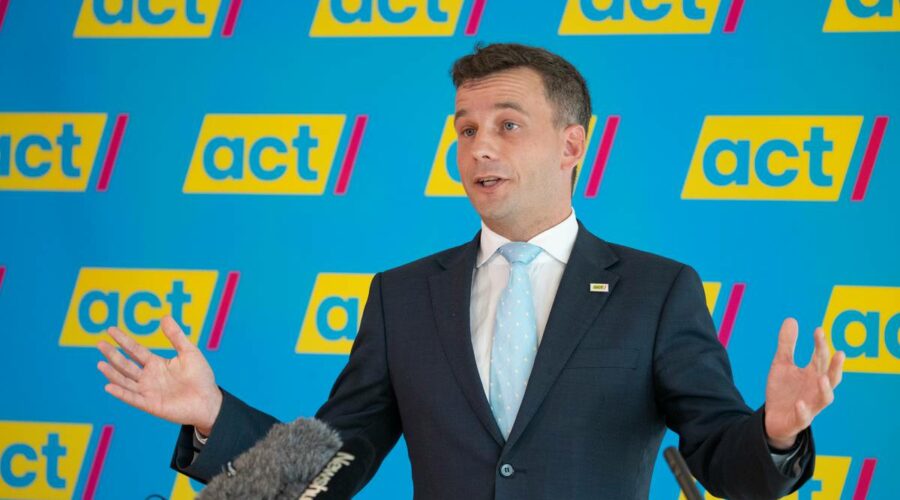 While Labour is happy with its helper to its left, National is increasingly irritated by the one to its right.

The Greens and Act have always been more activists than political parties. MMP has forced Labour and National to be ever-more blah, so the best they dare offer ordinary voters is John Key’s “brighter future” or Jacinda Ardern’s “this”. Labour calls it stew and National a casserole but it’s basically the same dish. It’s for the Greens and Act to add some spice.

Unwilling to negotiate across the political divide, neither the Greens nor Act has the leverage over Labour or National of NZ First, Te Pāti Māori (TPM) or Peter Dunne’s various United parties. Instead, they trade off being free of the median voter to widen the so-called Overton Window, the range of policy ideas deemed acceptable in polite company.

Since the 1970s, the Greens have had enormous success on that measure. The original Values Party manifestos were based on radical anti-capitalism, but many of the more specific policy proposals are now entirely mainstream, with some even too conservative for today’s National.

By the same measure, Act has failed.

Along with Bob Jones’ New Zealand Party, Act’s founders radically widened the Overton Window in the 1980s — not just with economic policy, but with Richard Prebble’s Nuclear Free New Zealand Bill, which led to the collapse of the Muldoon regime. But since Prebble led Act into Parliament in 1996, the Overton Window has not just gone left, but narrowed.

Whatever the proprietors’ private views, the menus at Chez Clark, Key, Ardern and Luxon have basically been the same for 25 years. The odd special occasionally pops up on the blackboard, like Key’s energy company IPOs or Ardern’s national awards, but the main courses are the same stodge the median voter demands — remembering that the median voter is someone who voted three times for Clark, three times for Key, once for Bill English, once for Ardern and is now flirting with Christopher Luxon.

If that’s you, congratulations. You are the only voter Labour and National care about. For everyone else, just be grateful that MMP has delivered — whether you agree with them or not — the likes of Russel Norman, Metiria Turei, David Seymour and Brooke van Velden, as Labour and National have become mainly vehicles for careerists.

While the Greens can point to greater success than Act historically, the tables have turned.

Climate Change Minister James Shaw joins the political pantheon by securing both Labour and National’s support for his Zero Carbon Act and this week’s emissions budgets out to 2035.

The Green co-leader has even maintained big-party consensus that further reducing New Zealand’s 0.15 per cent of global emissions should be prioritised over adaptation, despite the NZ SeaRise project indicating New Zealand’s coastal regions are under immediate threat.

This has come with a very high political price for the Greens.

Shaw’s consensus means the Greens, Labour and National all head to the election with broadly the same climate-change policies, including demanding only modest emissions reductions before 2026. Only after the next two elections do Shaw’s budgets require significant change, earning him regular public wallopings from Norman, now Greenpeace’s local boss.

Green strategists argue the party could still advocate a more ambitious programme than Labour or National, but that would be entirely hollow since its co-leader has already conceded any additional measures to keep both big parties happy. The range of acceptable discourse on climate change has radically narrowed, nudging the Overton Window to the right.

Act has budgeted for a simplified tax system with a top rate of 28 per cent. The same week Chris Hipkins admitted 40 per cent of the growth in government workers under Ardern has been for the likes of policy analysts and communications advisers rather than teachers, nurses, doctors and police, Act rightly promises to butcher Wellington’s bloated bureaucracy back to its 2017 numbers.

Clark and Key’s multibillion-dollar corporate welfare machine would be abolished, along with Ardern’s additions like the Provincial Growth Fund and handouts for “shovel-ready” projects that aren’t.

Act would sell 49 per cent of the shares in AsureQuality, New Zealand Post, KiwiRail, the Railways Corporation, Transpower, Kordia and KiwiBank, and 100 per cent of LandCorp. It says it would welcome foreign investment and immigration, end the ban on oil and gas exploration, liberalise genetic-engineering laws, freeze the minimum wage, reintroduce 90-day trials, abolish Labour’s new national awards and raise the retirement age by two months a year until it reached 67.

Despite its big tax cuts and promises to boost teachers’ pay and defence spending to Australia’s and Nato’s target of 2 per cent of GDP, Act says its spending cuts and regulatory reforms would put the country’s accounts into the black immediately. In turn, that would reduce inflationary pressures and keep interest rates lower than under Labour or National.

Unless Act beats all expectations, very little of Seymour’s alternative Budget will happen under Luxon. Its very publication sufficiently disturbed the Labour-National duopoly that the new National Party leader publicly ruled out Seymour as his finance minister.

But neither Luxon nor Ardern bothered arguing against Act’s alternative. Instead, in an echo of when the Greens’ opponents didn’t bother arguing against recycling but just mocked them as dirty hippies, Labour put up Employment Minister and former shock-jock Willie Jackson to abuse Seymour, who affiliates to Ngāti Rēhia, as “a useless Māori”.

The good news is Labour and National failing to make any case against Act’s proposals legitimises them for mainstream debate. Next up, please, the Greens and TPM.