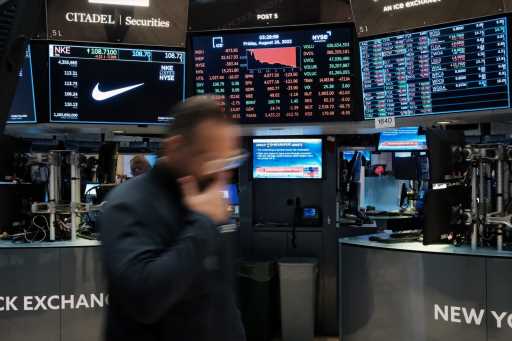 “Restoring price stability will take some time and requires using our tools forcefully to bring demand and supply into better balance,” Powell said at a keynote speech today at the central bank’s annual economic summit in Jackson Hole, Wyoming.

“Price stability is the responsibility of the Federal Reserve and serves as the bedrock of our economy. Without price stability, the economy does not work for anyone,” he said. But, “Restoring price stability will likely require maintaining a restrictive policy stance for some time. The historical record cautions strongly against prematurely loosening policy.” He sent the Dow Jones Industrial Average plunging more than 1,000 points, or just over 3%%, with losses accelerating in the final hour of trading.

It was the biggest market tumble since June.

Tech stocks slumped with Amazon, Snap and Google parent Alphabet down around 5%. Roku fell 7%. Paramount Global and Netflix shares fell by 4%, Disney by 3%, Comcast by 2%. Lionsgate took a hefty 6.5% knock.

Warner Bros. Discovery, in the spotlight for weeks amid canceled shows, layoffs and most recently a potential new chief for its DC brand (Dan Lin), saw its beleaguered stock dip 3.7%.

Electronic Arts was one of the few stocks bucking the downturn, rising 3.75% on a report that Amazon is considering buying it.

With inflation at 40-year highs, the Fed announced 0.75 percentage point interest rate hikes in both June and July and markets anticipate another 0.50 or 0.75 percentage point increase at its next meeting in September — more likely the latter given Powell’s speech today. Higher rates make it harder to borrow money and risk recession by cooling down the economy. But the central bank “must keep at it until the job is done,” painful as that may be, he said. The dance is to reduce demand for goods and services enough to lower inflation, but avoid tipping the country into recession.

The Fed’s summer interest rate hikes were its most aggressive consecutives moves since the early 1990s when it started using interest rates as a monetary policy tool.

‘Resident Evil’ Series Canceled By Netflix After One Season