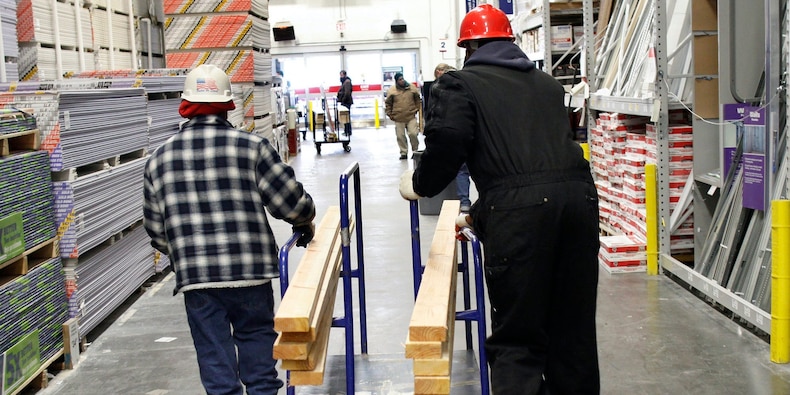 Lumber prices fell for an eighth straight day on Wednesday, deepening a roughly 30% pullback in the commodity.

Specifically, lumber futures fell roughly 5% to $1,201 per thousand board feet on the day.

Despite the pullback, lumber futures are still up 224% since May 19 of last year, and retailers like Home Depot have made it clear demand remains strong.

Home Depot's chief financial officer Richard McPhail said in a Tuesday interview with Bloomberg that lumber sales are comparable to "a storm environment where literally as soon as you bring it in, it's selling."

"We're really just focused on making sure we stay in stock and making sure we have the appropriate level of staff to serve our customers. The market will go where it goes," McPhail added.

"At the end of the first quarter of last year, a sheet of 7/16 OSB [oriented strand board] was approximately $9.55. As we exited the first quarter this year, that same sheet of OSB more than quadrupled in price to $39.76," Decker said.

Lumber prices have increased so much that CBS Denver reported thieves have taken to stealing the commodity from construction sites.

And KUTV Utah reported builders are looking for alternative materials to get around the rising costs of lumber, with some even turning to Bamboo.

US home construction also fell 9.5% in April, according to US Census Bureau data, as homebuilders struggled with rising commodity prices in lumber, copper, and steel.

Still, lumber prices are falling in the past week due to the end of a "de facto short squeeze" on the commodity, according to Stinson Dean, the owner of Deacon Lumber Company.

Brian Leonard, an analyst for RCM Alternatives in Chicago, also noted lumber futures are being driven down by "computerized trading and other platforms not related to the physical product, so it may end up going lower than the real market need to go," per Bloomberg.

"The mills know there's a lot more buying than needs to happen," he added.

Lumber stocks like Weyerhauser and West Fraser Timber fell as much as 4.58% and 5.77%, respectively, on Wednesday in lock-step with declining lumber future prices.

Read more: 'If lumber crashes, stocks might be next': An award-winning portfolio manager who's tracked lumber prices for years breaks down why futures hitting a record high of $1,600 is an ominous sign – and shares what investors can do ahead of the eventual crash