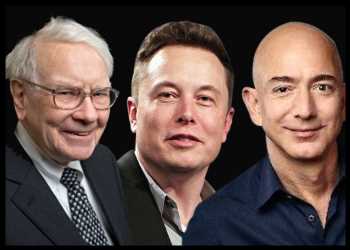 ProPublica said it has obtained “a vast trove of Internal Revenue Service data on the tax returns of thousands of the nation’s wealthiest people, covering more than 15 years” to substantiate their points. The new report is part of an ongoing reporting project, titled, The Secret IRS Files.

The data provided “an unprecedented look inside the financial lives of America’s titans, including Warren Buffett, Bill Gates, Rupert Murdoch and Mark Zuckerberg”. It includes their investments, stock trades, gambling winnings and even the results of audits.

The Amreican billionaires’ wealth derives from the skyrocketing value of their assets, like stock and property. Those gains are not defined by U.S. laws as taxable income unless and until the billionaires sell, according to ProPublica.

According to Forbes, the 25 richest Americans’ wealth rose to a collective $401 billion from 2014 to 2018. They paid a total of $13.6 billion in federal income taxes in those five years, the IRS data shows. It amounts to a true tax rate of only 3.4 percent.

This is in stark contrast to a 14 percent federal tax rate that a median American household that earned about $70,000 annually paid in recent years. The highest income tax rate is 37 percent, introduced this year for couples on earnings above $628,300.

The 90-year-old business magnate, who is currently the chairman and CEO of Berkshire Hathaway, is known as an advocate of higher taxes for the rich.

According to Forbes, his riches rose $24.3 billion between 2014 and 2018. The data shows that over those years, Buffett reported paying $23.7 million in taxes, which works out to a true tax rate of just 0.1 percent.