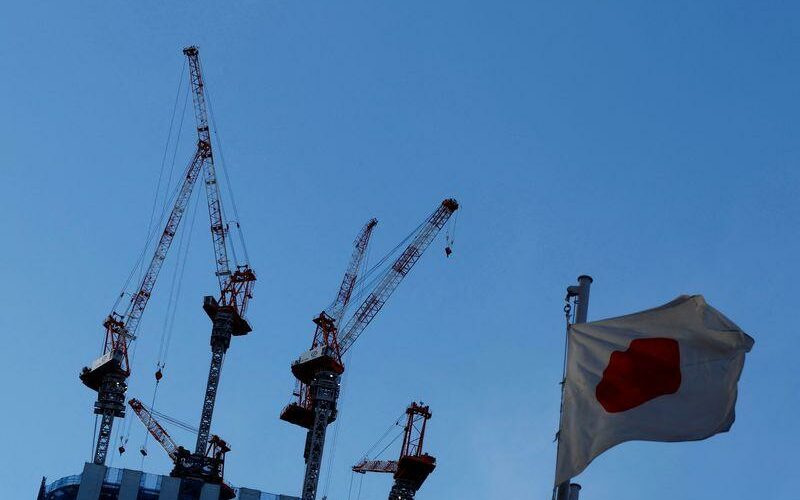 TOKYO (Reuters) – Japan’s economic growth will likely grind to a near halt this quarter as coronavirus curbs and supply disruptions threaten to derail the country’s economic recovery, a Reuters poll of economists showed on Monday.

Japan’s national flag flutters in front of a construction site of a commercial building in Tokyo, Japan, February 17, 2022. REUTERS/Kim Kyung-Hoon/Files

The forecast was much lower than the robust expansion expected in January’s projection in a sign of the heavy damage chip and parts shortages and the infectious Omicron variant are inflicting on the world’s third-largest economy.

Another setback for the economy could put pressure on the government to do more to offset a surge in global energy prices and to support households ahead of upper house elections that must be held by the summer.

Japan’s economy will grow an annualised 0.4% in the first quarter, down from a 4.5% expansion predicted last month, according to the median forecast of nearly 40 analysts in the poll, which was mostly carried out before Russia’s invasion of Ukraine.

The economy grew an annualised 5.4% in the final months of last year, keeping the seasonally-adjusted real gross domestic product (GDP), sized around 541 trillion yen ($4.7 trillion), below the pre-pandemic level of late 2019.

The economic outlook has become more uncertain for Japan due to the Russia-Ukraine crisis and soaring energy and raw material prices, which are aggravated by a weaker yen.

The Japanese currency hit a near five-year low against the U.S. dollar in January, and has since hovered close to that level.

In a Feb. 15-25 poll, the largest risk to the country’s economy over the coming year was expected to be from the emergence of new coronavirus variants, followed by faster than expected U.S. monetary policy tightening and supply chain disruptions.

“Private consumption has to normalise for the economy to recover,” said Atsushi Takeda, chief economist at Itochu Economic Research Institute.

“Coronavirus trends continue to be the biggest risk for that not to happen.”

Economic growth is expected to pick up to an annualised 5.6% in the second quarter, which was better than last month’s projection of 3.4% growth, according to the poll.

The poll also found the economy would grow 2.9% in fiscal 2022, starting in April, after an expected 2.5% expansion this fiscal year.

Three-quarters of 33 analysts who responded to a question about U.S. interest rate rises said multiple hikes by the U.S. Federal Reserve in the coming 12 months would not have a serious impact on Japan’s economy.

The remaining quarter, or eight respondents, said the effect of multiple U.S. rate increases on the economy would be serious, while none expected it to be very serious.

“The impact won’t be serious if attention is paid to improvements of supply constraints while prices are kept in check by multiple rate rises,” said Harumi Taguchi, principal economist at IHS Markit.

“If prices rise more than expected and depress consumers’ purchasing power, there’s a risk of a vicious cycle of price hikes and wages that may lead to a recession in the United States.”