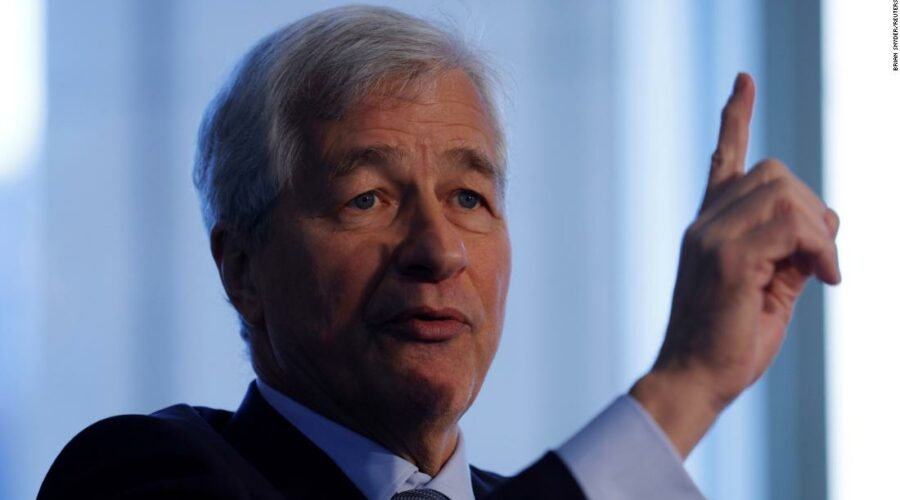 New York (CNN Business)Jamie Dimon is worried about the powerful shockwaves set off by the combination of high inflation and Russia’s invasion of Ukraine.

Dimon, one of the world’s most influential business leaders, warned Monday in his annual shareholder letter that the conflict poses a significant threat to the economic recovery that began less than two years ago.
“The war in Ukraine and the sanctions on Russia, at a minimum, will slow the global economy — and it could easily get worse,” the JPMorgan Chase (JPM) CEO wrote in the letter.

The conflict has already set off severe turbulence in energy, agricultural and other commodity markets.

JPMorgan, like other major banks, has downgraded its growth forecasts for the United States, Europe and, of course, Russia. Dimon recalled how the 1973 oil embargo sent oil prices skyrocketing, pushing the world into a recession.

“Many more sanctions could be added — which could dramatically, and unpredictably, increase their effect,” he wrote.
Dimon said the stimulus-driven recovery from Covid-19, the need to rapidly raise interest rates to fight inflation and the war in Ukraine represent a unique set of challenges.

“They present completely different circumstances than what we’ve experienced in the past — and their confluence may dramatically increase the risks ahead,” he said. “While it is possible, and hopeful, that all of these events will have peaceful resolutions, we should prepare for the potential negative outcomes.”

Uniting against ‘all forms of evil’

The war in Ukraine poses a test to the role of America on the world stage and western ideals, too.
“America must be ready for the possibility of an extended war in Ukraine with unpredictable outcomes,” Dimon said. “We should prepare for the worst and hope for the best. We must look at this as a wake-up call.”
The JPMorgan boss cheered the “coalescing” of the Western world, across Europe, NATO countries, Australia, Japan and Korea, in support of Ukraine and called for even closer ties.
“We need to make this a permanent, long-lasting stand for democratic ideals against all forms of evil,” Dimon said.
The economic challenge is magnified by the fact that the war is adding pressure to stressed-out supply chains and driving up costs for food and energy at a time when inflation is already very high.

The Fed has to get it ‘just right’

To fight inflation, the Federal Reserve is raising interest rates, perhaps rapidly. And that will make things tricky for both the economy and markets.
“I do not envy the Fed for what it must do next: The stronger the recovery, the higher the rates that follow (I believe that this could be significantly higher than the markets expect),” Dimon said, adding that rates will need to go up “substantially” and this will be a “hard job.”
Yet the harder the Fed hits the brakes by raising rates, the greater the risk of an accident in the economy, markets — or both.

Dimon struck a cautious tone on whether the Fed can achieve a so-called soft landing: taming inflation without tanking the recovery. He said if the Fed gets it “just right,” the economy can enjoy years of growth and inflation will “eventually start to recede.”
Either way, Dimon said, investors should buckle up.
“In any event, this process will cause lots of consternation and very volatile markets,” he wrote.
Already, markets have experienced wild swings, highlighted by the Nasdaq recently plunging into a bear market.
But Dimon, the most powerful leader on Wall Street, urged the Fed not to overreact to what’s happening on markets.
“The Fed should not worry about volatile markets unless they affect the actual economy,” he said. “A strong economy trumps market volatility.”
In other words, do what you think is right, even if that means a bear market in US stocks.

Recession concerns are somewhat surprising because the US economy is enjoying such a robust rebound from Covid.
Dimon hailed the “strong US economy, which, we hope, has Covid-19 in its rearview mirror.”
Then again, if anything the concern is that the economy is so hot that it’s overheating. And Washington’s unprecedented response, under both the Trump and Biden administrations, to Covid-19 played a role in the strength of the recovery.
Dimon said the Fed and government “did the right thing” by resorting to bold actions in response to the pandemic, including the central bank’s purchasing of trillions of dollars of bonds through a program known as Quantitative Easing, or QE.
“But also in hindsight, the medicine (fiscal spending and QE) was probably too much and lasted too long,” Dimon said, adding that it’s easy to second-guess complex decisions after the fact.

A Marshall Plan for energy

Looking ahead, Dimon reiterated his private call to President Joe Biden that the United States needs to come up with a “Marshall Plan” to promote energy security for America and European allies.
Dimon said that plan entails securing the necessary energy supplies now for the next few years, while still reducing emissions and fighting climate change.
The war in Ukraine, along with Covid-19, have exposed glaring weaknesses in the supply chains that underpin the world economy.
Dimon said there is “no question” supply chains need to be restructured, in part to make sure America’s enemies can’t take advantage of them in a crisis.

“For any products or materials that are essential for national security (think rare earths, 5G and semiconductors), the US supply chain must either be domestic or open only to completely friendly allies,” Dimon wrote.
“We cannot and should not ever be reliant on processes that can and will be used against us,” Dimon said, “especially when we are most vulnerable.”
Source: Read Full Article

04/04/2022 Business Comments Off on Jamie Dimon on China joke: 'I regret and should not have made that comment'
Markets