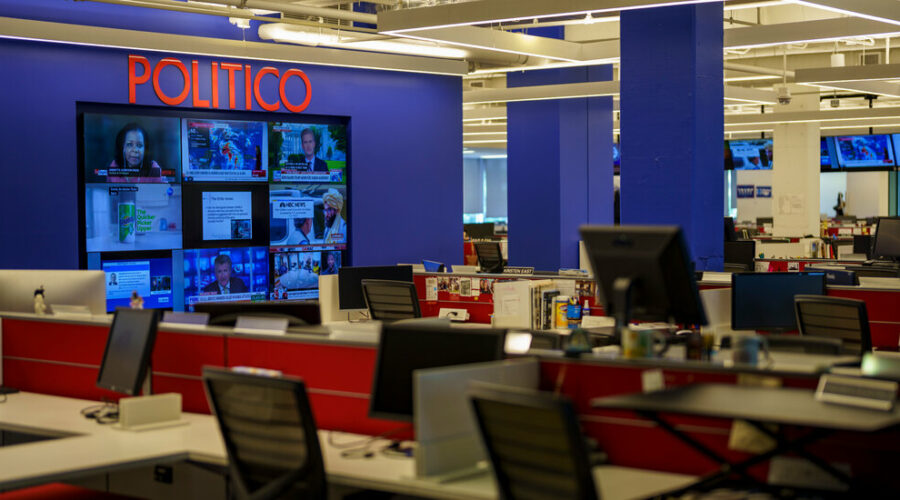 I was sitting in a bar next to John Harris, a former national editor of The Washington Post. It was late in 2006, and he was recruiting me for a new project, a superblog called The Politico. I was interested, but I had a few questions about the owner. I had never heard of Robert Allbritton and I asked if he’d be the kind of billionaire publisher who wanted to see his own column on the front page, or if he’d be the other kind of wealthy owner, a dilettante who gets quickly bored with his new plaything.

Mr. Harris answered my question in cryptic Washington-speak: “He went to Wesleyan.” And it seemed to me that his mention of the freethinking liberal arts college in Connecticut meant something like: “He’s mostly harmless.”

Mr. Allbritton turned out to be a bit more than that. The Washington heir, whose Georgetown existence and mild affect put him at a considerable distance from the larger-than-life characters in the red-hot center of digital media, has scored the kind of deal his counterparts in New York and Los Angeles only dream about: a billion-dollar sale.

On Thursday he reached an agreement to sell Politico (the “the” got dropped early on) for a billion dollars in cash to the German media company Axel Springer, meaning that he had pulled off what is probably the most successful exit in its generation of new media, in pure business terms. Mr. Allbritton, who had sunk more than $50 million of family money into Politico by 2018, is now among the most successful media investors of the century — although Politico, which never entered the buzzy venture capital fray, had rarely been mentioned among hot media start-ups.

“We kind of disadvantaged ourselves by not taking VC money because we just weren’t part of the conversation,” Mr. Albritton said.

Now, he added, he’s pleased to be handing his company over to Axel Springer, a swashbuckling outfit whose Berlin tower long stood as a gleaming middle finger to the Communist East.

Axel Springer publishes the confrontational German tabloid Bild, but its chief executive, Mathias Döpfner, told me the Politico deal cemented the company’s American future. Mr. Allbritton noted that the Politico staff will not be subject to one notable feature of the German company — a mission statement employees are required to sign in support of the trans-Atlantic alliance and Israel, among other favored values.

I spoke to Mr. Allbritton, 52, by phone for about 90 minutes Saturday. I’d been promised his first interview since the sale became public, and I should admit I came for the drama. His story had long intrigued me. When he started Politico, he was known as the scion of an upstart D.C. dynasty that had been gunning for the more patrician Graham family, which owned The Washington Post. His father, Joe, was a television mogul from Houston who bought The Washington Star in 1975, hoping to make it into a feisty, right-leaning competitor to the main paper in town.

As publisher, he did in fact press to put his own column on the front page. That was because he belonged to “a different generation” and was “a more command-and-control” kind of guy, the younger Mr. Allbritton said.

When federal regulators forced him to sell The Star in 1978 because of cross-ownership rules that prevent media companies from owning television stations and a newspaper in the same city, he was devastated — and chalked it up to a “mild conspiracy,” his son recalled.

The younger Mr. Allbritton went into the family business after graduation from Wesleyan in 1992 with a degree in government. In 2007, he took advantage of a loophole in cross-ownership regulations that allowed a company that owned TV stations to run a publication that did not appear regularly (Politico’s print edition follows the congressional calendar). He bet on the vision of two former stars of The Post, Mr. Harris and Jim VandeHei. They brought in Mike Allen, a Time magazine columnist who was already known as a clearinghouse of Beltway news and gossip, and he filled Politico’s Playbook newsletter with the kind of insider-y stuff that sustained White House aides, Georgetown hosts, K-Street lobbyists and Capitol Hill underlings alike.

The old man was delighted. Before his death in 2012, he wore a Politico hat around town.

In 2013, Robert Allbritton, now the chief executive of the privately held Allbritton Communications, sold the family’s TV stations and devoted himself to his own baby, Politico. Last week, the billion-dollar sale brought him the kind of vindication that heirs don’t always get.

The father-son drama was small in comparison with the explosion that rocked Politico in 2015. That year, Axel Springer — already a partner in Politico Europe — offered to buy the publication in a deal valued at around $250 million, Mr. Allbritton confirmed.

Mr. VandeHei, by then Politico’s chief executive, was already bridling at working for the family business — and he wanted to go ahead with the deal. Mr. Allbritton refused, just as had rebuffed earlier overtures from CNN and Reuters, he said.

“A lot of other people had much bigger emotional reactions than I did,” he said brightly.

He also said that he did not consider Axios a competitor, given that its coverage was “broader” than Politico’s. He pointed to recent Axios articles on Apple News and the hurricane approaching New Orleans.

“We would never do a piece on meteorology,” Mr. Allbritton said.

But Mr. VandeHei’s exit did not sit well with his former longtime editorial partner, Mr. Harris, and the site’s new editor, Carrie Budoff Brown. “Politico implodes,” gloated The Post. And as Axios took on the sheen of hot new thing, the rivalry between the two publications turned bitter. (At this point, assigning blame for the breach is a little like trying to glibly arbitrate the Israel-Palestine conflict.)

Mr. Harris spent the next year persuading Politico’s reporters and editors not to abandon ship, while Ms. Budoff Brown restructured the newsroom and worked to improve a workplace culture some employees described as grinding and sometimes sexist.

In May, Mr. Allbritton said he caught wind that Mr. VandeHei was in talks to sell Axios to Axel Springer. Did he start negotiating with the Germans to spoil Mr. VandeHei’s deal? I supposed that might have been part of the attraction. And in Politico’s news release announcing the planned sale, a quote from Mr. Allbritton suggested as much: “Particularly in recent years,” he said, “we have put the emphasis on doing rather than boasting.” A spokesman denied that the line was aimed at his former colleagues, and Mr. Allbritton said he was simply, after years of flirtation with Axel Springer, ready to acknowledge that his family business didn’t have the “horse power” necessary to keep growing.

“We’re better off with this publication going to a big global company,” he said.

On the day of the announcement, The New York Times reported that Axel Springer might still pursue a deal for Axios — perhaps Mr. VandeHei would be chief executive after the two publications merged? (I’d always assumed he would run for office in his native Wisconsin one of these days.) Politico’s executives in Washington pressed the German company to add a firm denial to the story, which they did.

Asked why he had chosen Politico over Axios, Mr. Döpfner told me in a telephone interview, “It’s an easy decision that you go for the No. 1.” Mr. VandeHei called the sale “great news” for companies that produce quality journalism in a text to me.

As I dug into the deal, it struck me that the most dramatic part of the whole thing may be how solid Politico’s business is. The jump to an offer of $1 billion in 2021 from roughly $250 million in 2015 may be attributed to partly to a bubbly market and partly to the ambitious German company’s desire to burn the cash it received when the private equity giant KKR took it private in 2020. But the valuation lies mostly in Politico’s profit margins.

Allbritton Communications had been writing checks to cover Politico’s losses for a few years by 2017, when Politico’s chief executive, Patrick Steel, told Mr. Allbritton he’d need about $8 million to cover the hole in the next year’s budget — and the owner refused to write another check.

“We were rarely the ones that got the industry headlines over the last five years,” Ms. Budoff Brown said. “The strategy wasn’t particularly flashy and we weren’t the upstarts anymore.”

Indeed, the strength of the business isn’t actually rooted in the kind of scoopy, splashy political reporting that made Politico a player. About half its revenue comes from a project Mr. VandeHei got off the ground in 2014, the products called Politico Pro Plus and Politico Pro Premium. Those digital platforms will — for a mere $10,000 or more for an annual subscription — keep you up to the minute on the inner workings of the Agriculture Committee, or the Armed Services Committee, or anything else of urgent interest to Washington’s lobbyists and bankers. Customers sign up for two-year contracts in the five and six figures, and it doesn’t take that many to build an enviably stable and profitable media business.

The profit margins were more than 20 percent last year, and they’re expected to top 30 percent this year on revenue of about $200 million, the company said. The influx of cash has made up for Mr. Allbritton’s early losses. And a logical next move for the new owners, Mr. Allbritton said, would be to extend itself further into the business of supplying more pure feeds of specialized data to Beltway insiders.

The business model has also allowed Politico to — love it or hate it — stand largely outside the debates of recent years over whether journalists should remain politically neutral in their public statements.

“Culturally, what we do is becoming more and more foreign to people,” Mr. Allbritton said. Many readers, he added, “either go to hard left or hard right — it’s almost becoming a religious argument. Otherwise, why aren’t people taking a vaccine?”

“The beautiful thing is, our real audience — it’s professional folks in D.C.,” he said.

Mr. Allbritton generally refused my attempts to draw out his own feelings. He gives off a Boy Scout vibe and said that, even if this column turned out to be critical, it wouldn’t matter much to him.

There was one topic, however, that elicited a couple of profanities. Mr. Allbritton’s company has operated both unionized and nonunion workplaces, and Politico now faces a organizing drive from the NewsGuild, which represents workers at more than a dozen news outlets, including The Times.

“If you’re working in a warehouse, it makes sense,” he said. “But when you’re talking about smart folks who are using their minds for a very creative project, I don’t get it.”

In the best case scenario, he added, the threat of a union would keep Axel Springer executives on their toes. “They’re going to go the extra mile to keep the flexibility,” he said. And if the union drive succeeds? “That’s when the KKR guys are going to show up,” Mr. Allbritton said.