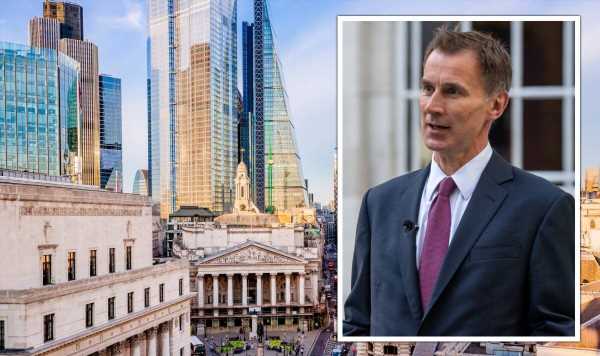 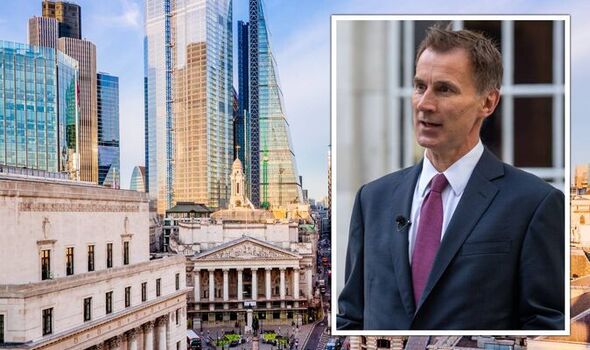 Reports of the planned tax raid sent shares in three of the biggest lenders down, wiping £2.4billion off the market value of NatWest, Barclays and Lloyds Banking Group. Market sources said they were being sold off due to fears that the Government sees them as a cash cow.

Banks fear Mr Hunt will hit them with new taxes on their profits when he unveils his medium term fiscal plan at the end of the month.

He is looking to raise £40billion to plug the hole in Britain’s finances following the calamitous mini-Budget.

Britain already has a 0.1 per cent levy on bank balance sheets, as well as an 8 per cent surcharge on profits above the 19 per cent rate of corporation tax.

David Postings, head of lobby group UK Finance, claimed any new or increased taxes on banks would damage the sector and the wider economy.

He said: “The banking and finance industry is the engine of the economy, providing jobs and investment up and down the country. Two-thirds of those jobs are outside London.

“The industry pays a higher rate of taxation overall than any other sector because of the bank surcharge and the bank levy.

“The Government’s decision to increase corporation tax, when it was originally planned, included a reduction in the surcharge levied on banks.

“Following the decision to revert to the originally proposed headline corporation tax rate, we urge the Government to consider the surcharge very carefully and not put at risk the competitiveness of the UK’s banking and finance industry.”

Natwest, Lloyds, and Barclays are the three biggest banks in Britain with its businesses listed on the London Stock Exchange.

Michael Hewson, from CMC Markets, said: “Bank shares struggled the most yesterday on fears that they could be hit by a new windfall tax on top of the 8 per cent banking surcharge.

“With corporation tax due to rise to 25 per cent next year, it seems there is no length that politicians will stoop to try and fill various holes in the public finances. Never mind that they risk crushing investment in the process.”

Mr Hunt is also believed to be looking at taxes on the profits of oil and gas companies. However, shares in BP and its rival Shell rose yesterday.

Energy companies had benefited from surging wholesale oil and gas prices post-pandemic, before Russia’s illegal invasion of Ukraine sent them even higher.

The Government had initially resisted calls for a windfall tax on energy companies, but in May then Chancellor Rishi Sunak introduced one.

The “energy profit levy” paid by North Sea producers will increase from 40 per cent to 65 per cent by December 2025. Mr Hunt is believed to be looking at extending it beyond 2025.