Hong Kong (CNN Business)A bombshell New York Times investigation has offered the most conclusive proof yet that US President Donald Trump’s business empire is nowhere near as successful as he claims.

Trump has for years cited his business acumen as a defining trait, and one that gave him an advantage over others seeking the presidency.
“I did a lot of great deals, and I did them early and young. And now I’m building all over the world, and I love what I’m doing,” he said when he announced his presidential bid in June 2015. “I’m really proud of my success. I really am.” 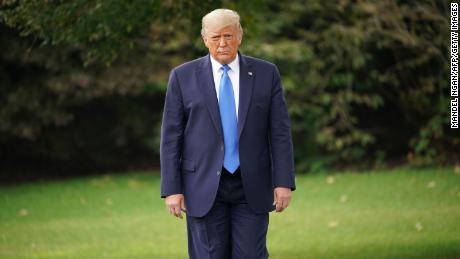 But that picture has been complicated in the years since the former host of “The Apprentice” was catapulted into the political spotlight. News reports have drawn attention to Trump’s history of corporate bankruptcy and the outsized role his father played in his financial success.
On Sunday, the New York Times published the deepest dive ever into the US president’s finances, citing detailed tax records that the newspaper says “portray a businessman who takes in hundreds of millions of dollars a year yet racks up chronic losses.”

“The tax returns for Mr. Trump and hundreds of his businesses reveal the hollowness, but also the wizardry, of the self-made-billionaire image honed through ‘The Apprentice,'” the Times concluded. “They demonstrate that he was far more successful playing a business mogul than being one in real life.”
Trump on Sunday denied the New York Times story and claimed that he pays “a lot” in federal income taxes. “I pay a lot, and I pay a lot in state income taxes,” he said. A lawyer for the Trump Organization, which manages the president’s family businesses, told the Times that “most, if not all, of the facts appear to be inaccurate.”
Here’s a look at what the Times investigation revealed:

Trump paid no or little federal income taxes for years

According to the Times, he paid no federal income taxes in 11 out of 18 years the newspaper examined. He also managed to pay federal income taxes of just $750 in each of the first two years of his presidency, 2016 and 2017. The report shed some light on how this was able to happen, namely by the way his businesses reported their earnings.
“Throughout his career, Mr. Trump’s business losses have often accumulated in sums larger than could be used to reduce taxes on other income in a single year,” the Times reported. “But the tax code offers a workaround: With some restrictions, business owners can carry forward leftover losses to reduce taxes in future years.”

Many of his businesses are burning huge piles of cash

According to the investigation, some of Trump’s companies are doing well and profitable; others, not so much. Some of his best-known ventures “report losing millions, if not tens of millions, of dollars year after year,” according to the Times. That includes his famous golf courses — which have reportedly racked up at least $315 million in losses over the past two decades.

Trump Tower in New York is a major moneymaker

The storied skyscraper, which sits on Manhattan’s Fifth Avenue, has “reliably delivered more than $20 million a year in profits, a total of $336.3 million since 2000,” according to the Times. Trump’s stake in two office towers in New York and San Francisco has also worked out well, delivering $176.5 million as of the end of 2018, the publication reported.

Trump’s D.C. hotel is not

The Trump International Hotel in Washington D.C., which reportedly asked for relief on rent payments earlier this year due to the coronavirus pandemic, has lost more than $55 million since opening four years ago, the Times reported. The property has come under intense scrutiny in recent years amid allegations that Trump was unfairly profiting from his presidency.

Selling his name has paid off enormously

Trump is known as a master of branding and licensing — his merchandise has famously included Trump steaks and water bottles, among other items. The Times found his personal brand strategy to be “the most successful part of the Trump business,” earning $427.4 million in aggregate between 2004 and 2018.

That’s in large part thanks to ‘The Apprentice’

A significant chunk of that money came from “The Apprentice.” Before entering politics, Trump hosted 14 seasons of the hit NBC reality show, where contestants duked it out for a position working for Trump. The series boosted Trump’s profile, while also bolstering his net income by $197.3 million, according to the Times.

He made money from foreign deals after becoming president

“When he took office, Mr. Trump said he would pursue no new foreign deals as president,” the Times reported. “Even so, in his first two years in the White House, his revenue from abroad totaled $73 million.”
Trump had extensive foreign business interests before he became president, leading to questions about potential conflicts of interest. As of 2016, for example, his financial disclosures listed more than 140 companies that had dealings in at least 25 countries around the world, according to a CNN review.

Part of his income stems from ambiguous ‘consulting fees’

The Times’ examination of financial records revealed a pattern of how the president was paid on various projects. “Between 2010 and 2018, Mr. Trump wrote off some $26 million in unexplained ‘consulting fees’ as a business expense across nearly all of his projects,” according to the outlet. It said that the president’s eldest daughter, Ivanka Trump, had also previously appeared to “have received” fees under this designation, despite working as an employee of the Trump Organization.
“Ms. Trump had been an executive officer of the Trump companies that received profits from and paid the consulting fees for both projects — meaning she appears to have been treated as a consultant on the same hotel deals that she helped manage as part of her job at her father’s business,” the Times reported.

The investigation revealed the scope of the family business, which includes hundreds of ventures that are reportedly nearly entirely controlled by the president. Although some of these businesses weren’t lucrative, they “still served a financial purpose: reducing his tax bill,” according to the Times. For example, “the reported losses from the operating businesses were so large that they often fully erased the licensing income, leaving the organization to claim that it earns no money and thus owes no taxes,” the newspaper reported.
Source: Read Full Article