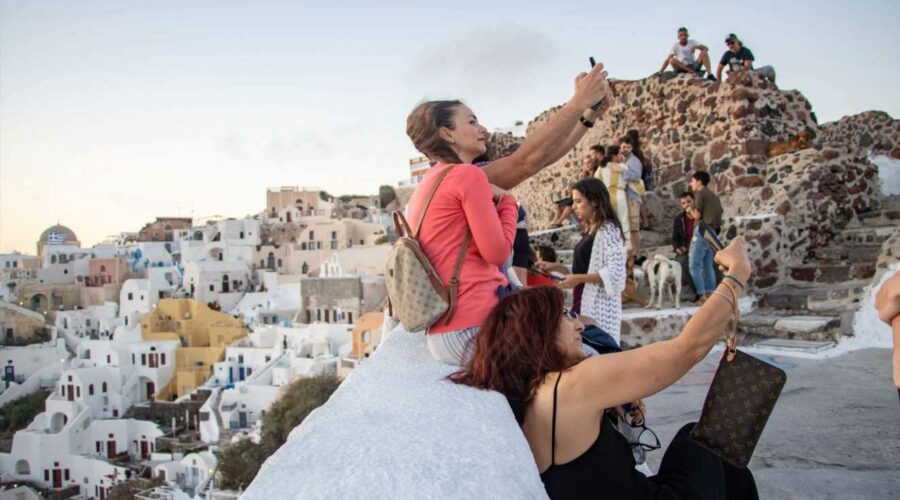 They have a reputation for being loud and obnoxious, but as Europe looks set to reopen its borders to foreign visitors in time for the summer travel season, it's hoping American tourists will make a comeback.

The European Union signaled last week that it will ease restrictions for vaccinated travelers from outside the bloc, including the United States. The E.U. shut its borders last year in a bid to stop Covid-19 from spreading, but many member states that are heavily reliant on tourism are desperate for foreign travelers to return.

International arrivals to Europe dropped by 70 percent last year compared to 2019. Americans made more than 36 million trips to Europe in 2019. That number fell to 6.6 million last year, according to data from the European Travel Commission.

But with half of American adults now fully vaccinated and U.S. airlines increasingly expanding flights to Europe, some Americans are starting to consider the possibility of summer travel this year.

After European Commission President Ursula von der Leyen hinted last month that Americans who have been fully vaccinated may be able to visit the bloc's countries this summer, searches for E.U. airfares from the U.S. went up by 47 percent, according to the airfare analytics firm Hopper.

This month, Greece became the first major European travel destination to welcome back foreign tourists — Americans among them — without requiring them to quarantine if they are fully vaccinated or have a negative Covid-19 test.

"Greece is offering what people need," Greek Tourism Minister Harry Theoharis tweeted as the country reopened May 15. "Calm and care-free moments on the road towards normality."

The country has pledged to fully vaccinate the population of its 6,000 islands by the end of June.

One of them, Instagram-famous Santorini on the Aegean Sea, is a tourist trap for Americans. They make up 60 percent of the customer base for Canaves Oia, a small chain of luxury hotels overlooking the endless blue sea and whitewashed houses.

Asked how much he misses having Americans around, Managing Director Markos Chaidemenos told NBC News, smiling: "You have no idea."

Even before the E.U. announcement, Chaidemenos, 33, said the hotels' first U.S. guests in more than a year started arriving, as soon as Greece reopened this month.

"Travel agents are swamped with requests," he added.

But other E.U. states have been more cautious than Greece.

Germany, where Americans represent the largest overseas tourism market, has been cautious with the easing of lockdown measures, with its 16 states slowly lifting some restrictions only in the past week.

Some museums are reopening with restrictions, and cafes and restaurants are starting to reopen for outdoor dining in its hip, urban capital, Berlin, where Americans are the most frequent foreign visitors after Britons.

Tourism in the city has been hit hard, said Christian Taenzler, spokesman for Visit Berlin, the capital's official travel guide. So the E.U. move to ease travel restrictions for international travelers leaves him optimistic about the summer season.

Taenzler, 59, hopes Germany's reputation as a safe country with strong health infrastructure and stringent hygiene protocols will make it a go-to destination for Americans and other foreigners, who are still anxious about Covid-19 exposure.

The way Americans who decide to go to Europe this summer will travel is also likely to change, he said. He expects Americans to stay put in one location to minimize their movement, instead of visiting several European countries in one visit.

"Destination hopping is out," he said. "Safe destinations are in."

Meanwhile, Italy, another European destination popular with American travelers, is still officially in a state of emergency. It was one of the hardest hit in Europe in the early stages of the pandemic, and has the region's highest death toll.

Although cases and deaths are declining, there is still a night curfew in place across the country, and bars and restaurants are open only for outdoor dining.

But Italy has a large tourism sector, contributing 13 percent to its gross domestic product, and bringing foreign travelers back is vital for its post-pandemic recovery.

Earlier this month, Italian Prime Minister Mario Draghi told the world "the time has come to book your holidays in Italy."

The country has also expanded so-called "Covid-19 free" flights to and from some cities in the U.S., which allow travelers to skip quarantine if they test negative before and after they get on the plane.

Like Greece, it's working to immunize its island tourism hot spots like Capri, off the coast of Napoli.

Eighty percent of the island's 14,000 residents have received the first dose of a vaccine, and there are no Covid-19 cases, Capri Mayor Marino Lembo said. Tourism workers who come to the island from mainland Italy are also being vaccinated.

It's part of an effort to let Americans and other foreign travelers know that coming to Capri is safe, he said.

Last year saw the island lose half its tourism revenue, he added.

But after the E.U. announcement, he is looking forward to seeing American tourists lounging in Capri's emerald waters once again.

"There is a desire to return," he said. "Americans find themselves at home here."

Meanwhile, France, the world's top tourism destination in 2019, is slowly emerging from its third lockdown.

The French regained some of their "joie de vivre" last week with the government reopening restaurant terraces and museums, including the famous Louvre. But masks are still mandatory inside and outside.

Americans have been banned from traveling to France since March 2020, and the country this week blocked travelers from the United Kingdom over concerns about a new coronavirus variant. But President Emmanuel Macron told CBS last month he hoped Americans could once again travel to France this summer.

Georges and Odette de la Rochebrochard own a restaurant near the Notre Dame Cathedral in Paris and rented out Airbnb apartments in the heart of the French capital.

Their livelihood depends on tourists, particularly Americans, but the pandemic saw them lose 80 percent of their revenue.

Despite the E.U. move to ease restrictions on foreign travel, they remain pessimistic about this summer's prospects.

"It's too late to announce that France and Europe are open for tourism this summer," Georges, 68, said.

"It's almost June, and I highly doubt lots of Americans will book a flight and hotel to Paris on such short notice. Tourism just doesn't work like that," he said.

"No one is expecting business as usual this year."

29/05/2021 Business Comments Off on Have American tourists been missed? 'You have no idea,' say European hotel owners
Markets