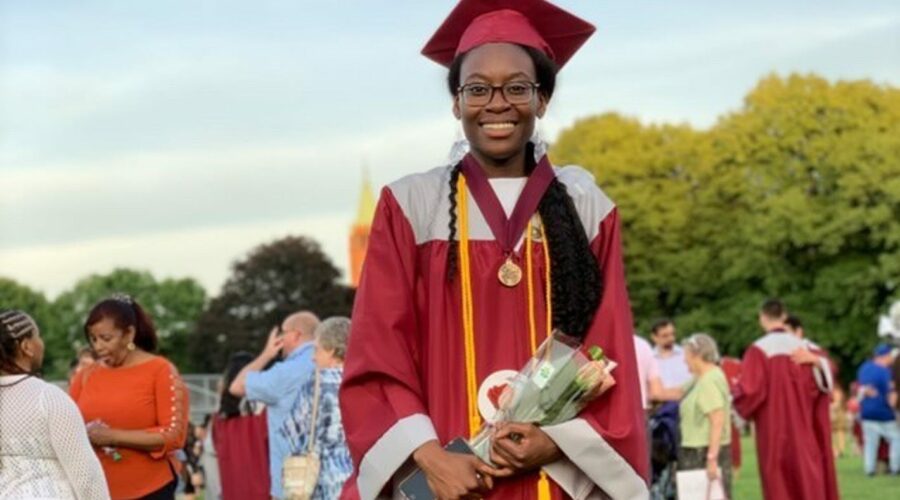 High school senior Verda Tetteh could have added a surprise $40,000 scholarship from Fitchburg High School to her collection of scholarships and financial aid to pay for her Harvard education. But instead, she asked the school to give the scholarship money to someone who needed it more.

Tetteh, who immigrated to the U.S. with her family from Ghana, delivered a powerful address on resilience at the beginning of the Massachusetts school’s June 4 graduation ceremony. When she spoke, she didn’t yet know she had been chosen as one of two students who would be awarded the school’s General Excellence Award.

After she took her seat, the school’s assistant principal announced the two winners of the $40,000 scholarship — and Tetteh was one of them. It was a shock to her.

“I mean I applied for it a month ago but also a ton of other amazing students applied so I didn’t know I was going to get it,” Tetteh told USA TODAY.

After she received the award, she listened to the assistant principal talk about being “selfless” and “bold.” That’s when she made the decision.

“I am so very grateful for this, but I also know that I am not the one who needs this the most,” Tetteh said. She had been awarded other scholarships and financial aid that she plans on using to fund her education.

She knew community college had greatly helped her mother, and she knew how far that money would go in funding an education there. So she said at the ceremony that she wanted the administration to consider giving the scholarship to a community college student.

Graduation: A shoe policy almost kept a high school senior from walking at his graduation; then a teacher stepped in

“When I initially gave it away, I felt relieved actually. I was very happy God had given me the strength to do the right thing and reflecting back on that now, I still stand by my decision,” Tetteh said. “I don’t think there’s been a moment where I regretted my decision.”

Tetteh said that her parents, like her, didn’t know she was receiving the scholarship until it was announced at her graduation, so it was a very spontaneous decision.

“My principal actually you know, found me later that day and said, ‘I’m so very proud of you and that was a very selfless move.’ My mom said she cheered and gave me a standing ovation so I think it was very positive feedback and response from across the board,” Tetteh said.

Tetteh told USA TODAY she has met with Principal Jeremy Roche to discuss how the scholarship will be reallocated. The plan: The one scholarship will be split into multiple  ones that will be awarded over the next four years. Starting this year, two students from the graduating class who will be going to community college will be awarded $5,000 each.

She encouraged incoming high school students to keep their eyes open in their community.

“You can make a change in every community, because you know that the world is always improving, so keep an eye open for what you can do and then be bold and be courageous, and work hard towards that change,” Tetteh said.

“She represented the class and the school amazingly well, and I would even dare say, her generation,” Roche told the Washington Post.