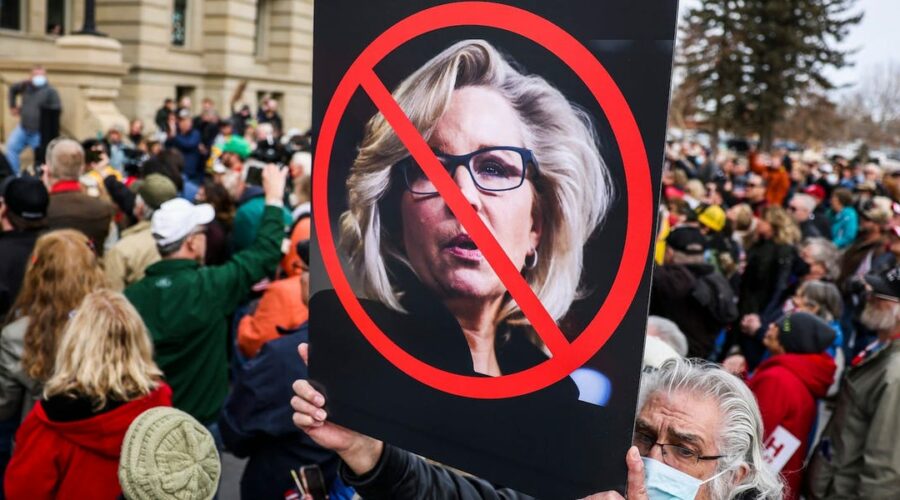 I think it’s really time to call it. The GOP is no longer the party of small government and fiscal responsibility (or at least lip service to those ideals). It is, first and foremost, the party of denying reality. The party of “The Big Lie,” and of corrupting our political institutions with the fantasy that elections it loses must have been stolen.

If you’re a “Republican” and that’s not what you believe, it’s time for you to leave too. There is no “saving” the party. It’s over. I have no idea where you should go. Maybe join the Libertarians and try to get them to sound less absurd. Maybe start your own party. Maybe plan on heading to Mars with Elon Musk. All that’s clear now is that the things that used to matter to Republicans — like limited government, a strong national defense, and fiscal responsibility — do not matter anymore. All that matters is buying into a toxic make-believe.

On Wednesday the GOP will almost certainly purge Wyoming Rep. Liz Cheney from leadership in the House of Representatives. Her colleagues will tell you it’s because she’s undermining the party message, or something equally anodyne, but in reality it’s because she won’t keep her mouth shut while other members continue to poison our discourse with the lie that the 2020 presidential election was stolen from Donald Trump.

The rest of Cheney’s conservative bona fides — actual policy beliefs that used to mean everything just a decade ago — don’t matter anymore. The fact that she has served the United States in the State Department during the Bush Administration doesn’t matter. That her father was elected Vice President of the United States as a Republican doesn’t matter either. The only thing determining her worthiness for leadership is whether or not she can tolerate the election lie, because that lie is the GOP’s current and singular strategy to maintain and regain power.

Reagan’s gone and he’s not coming back

Some more “traditional” conservative voices are making adorable, quixotic attempts to defend Cheney. But those attempts only reinforce how much the party has passed them by. The institutions that used to matter to the GOP have been upended. The once all-important Heritage Foundation grade has been replaced with a grip and grin photo with Donald Trump at Mar-a-Lago, or a passing mention from him during one of his narcissistic rambles on Fox.

The Wall Street Journal Editorial Board — an institution seemingly oblivious to its irrelevance in this moment — plead with the party to be reasonable in a piece last week. President Biden is attempting the most ambitious expansion of government since the New Deal, it argued, and Republicans need to focus on fighting that, keeping swing districts, and figuring out how to get the truth to its voters — 70% of whom believe the election was stolen from Trump.

But none of that is happening, likely in part because Biden’s ideas are popular with voters and the GOP has been hard pressed to come up with any of its own to counter them. The WSJ Editorial Board may have some ideas to share, but I doubt the party would listen.

New York Rep. Elise Stefanik — who will all-but-certainly replace Cheney — gets high marks from the disgraced former president, but has received a tragically RINO 56% grade from the Heritage Foundation. She started her career traditionally enough, working in the George Bush White House and then for former House Speaker Paul Ryan. She was even critical of Trump early in his administration, slamming his Muslim immigration ban and his treatment of women.

But Stefanik is a creature of this era — and this is an era in which the GOP has nurtured a deep admiration for any person with the ability to sacrifice principle for power. By the time Trump’s first impeachment trial was over she had fully converted to Trumpism. Now her lies about the election stun even the fact checkers at the Washington Post.

What ‘We can’t win without Trump’ means

South Carolina Republican Sen. Lindsey Graham — who also opposed Trump once upon a time — now says the GOP cannot win without him. Yes, Graham is certainly referring to Trump’s popularity with the base, but tacit in that statement is also an endorsement of Trump’s methods — of his lies, of his reality bending.

We’re seeing the party put this rejection of reality to work in state houses all over the country. Florida just passed a voter restriction law based on the lie that the last election was rampant with fraud — this even though Republicans cleaned up in races all over the state.

In Arizona a bunch of delusional ignoramuses are running around looking for traces of bamboo on ballots from November’s election based on a lie that they were somehow imported from Asia. All in an utterly disgraceful attempt to prove election malfeasance where there was none. This circus has a purpose, and it is to reinforce the Trumpian idea that if Republicans lose, it’s because Democrats cheated. The corrosive impact this is having on our democracy cannot be overstated.

None if this is okay with Cheney. It shouldn’t be okay with any American, since we agreed long ago that this country was going to be a democracy. But Cheney’s party now puts sanctioning this mendacity above all other values. It is now the defining tenet of the GOP — a party which failed to present a platform during the 2020 presidential race and rarely talks about its own policies anymore.

If that’s not for you and you call yourself a “Republican” it’s time for you to call yourself something else. You’ve lost your party. The cheaters have completely taken over. I offer my sincerest condolences to the WSJ Editorial Board.

12/05/2021 Business Comments Off on Give it up Reagan Republicans, you're not in the GOP anymore
Markets