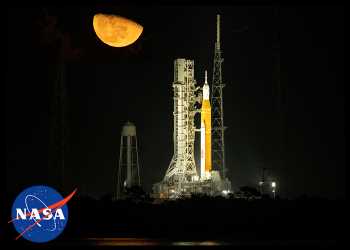 After multiple unsuccessful attempts, a giant rocket carrying Orion spacecraft is finally on its way to Moon.

The 322-foot-tall stack, consisting of the Space Launch System rocket and Orion spacecraft, lifted off from Launch Pad 39B at NASA’s Kennedy Space Center in Florida at 1:47 a.m. ET Wednesday.

The launch is the first leg of a mission in which Orion is planned to travel approximately 40,000 miles beyond the Moon and return to Earth over the course of 25 days.

Artemis 2 and 3 missions aim to send astronauts back to the lunar surface for the first time after half a century.

After reaching its initial orbit, Orion deployed its solar arrays and engineers began performing checkouts of the spacecraft’s systems. About 1.5 hours into flight, the rocket’s upper stage engine successfully fired for approximately 18 minutes to give Orion the big push needed to send it out of Earth orbit and toward the Moon.

Orion has separated from its upper stage and is on its outbound coast to the Moon powered by its service module, which is the propulsive powerhouse provided by European Space Agency through an international collaboration.

Over the next several hours, a series of 10 small science investigations and technology demonstrations, called CubeSats, will deploy from a ring that connected the upper stage to the spacecraft.

Orion’s service module will also perform the first of a series of burns to keep Orion on course toward the Moon approximately eight hours after launch. Orion is expected to fly by the Moon on November 21, performing a close approach of the lunar surface on its way to a distant retrograde orbit, a highly stable orbit thousands of miles beyond the Moon.

“What an incredible sight to see NASA’s Space Launch System rocket and Orion spacecraft launch together for the first time. This uncrewed flight test will push Orion to the limits in the rigors of deep space, helping us prepare for human exploration on the Moon and, ultimately, Mars,” said NASA Administrator Bill Nelson.