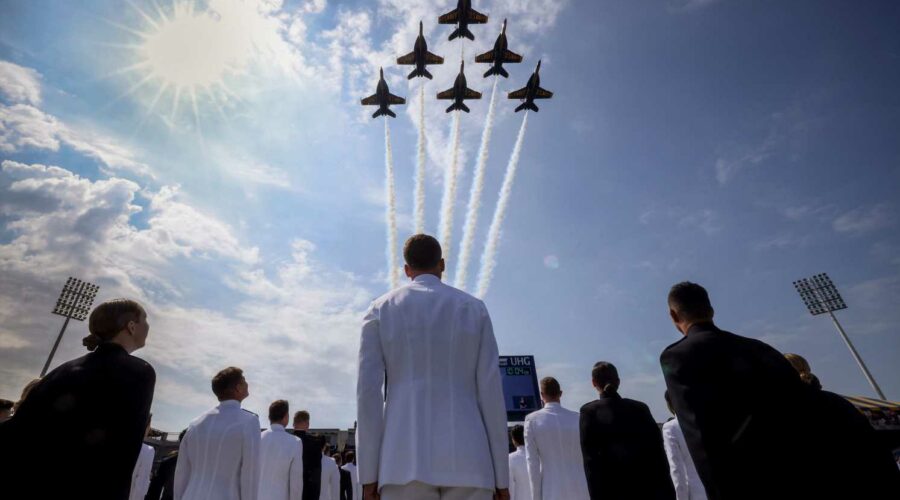 A Facebook post claims that the U.S. Navy Blue Angels, the nation’s oldest air demonstration squadron, can use their white exhaust trails to draw a hand in the sky.

“The Blue Angels perform ‘The hand of God,'” the caption says. Accompanying it is an image of five jets and a perfectly drawn hand above a layer of clouds.

The Blue Angels are known for their air acrobatics shows. Flying at speeds up to 700 mph, the pilots perform maneuvers that include inverted flights, loops, turns and group formations.

During the early months of the COVID-19 pandemic, the Blue Angels and the U.S. Air Force Thunderbirds flew over Atlanta, Baltimore and the Washington, D.C., area in honor of health care and other essential workers.

It is true that “the Hand of God” is a maneuver the Blue Angels perform during some shows.

But the image shared online is not a photograph of the Blue Angels. It’s actually a digital drawing from 2015.

Image is a digital drawing

The original image, named “Aviahand,” is a creation by Ukrainian artist Alexander Zienko, who describes himself as an illustrator and concept artist.

“It is drawn rather roughly, so it is a mystery to me why people think that this is a photograph,” Zienko told USA TODAY over email. “Perhaps due to the poor quality of those images that were posted on Facebook.”

Many of the images USA TODAY found on Facebook don’t give credit to Zienko and imply they are real photos of the maneuver.

Zienko said he didn’t know the maneuver existed in real life when he drew it. “I definitely did not think this was possible, I just drew a philosophical and comic picture,” he said.

Pictures of the Blue Angels performing the maneuver have been posted on DVIDS, a website where the military uploads official images and videos from all branches of the service.

An official image of the maneuver, taken in March at the Festival of Flight at the Naval Air Facility El Centro in California, doesn’t have as much detail as Zienko’s drawing. There are five jets, each flying in a different direction and using the white exhaust trails to resemble the five fingers of a hand facing the sky.

USA TODAY found other images of  the same maneuver that users shared on Facebook in July 2019. The posters didn’t immediately respond to USA TODAY.

A video by The Associated Press shows the Blue Angels performed the maneuver during their 2019 Independence Day flyover above the Lincoln Memorial in Washington, D.C.

We rate the claim that an image shows the Blue Angels performing a maneuver called “The Hand of God” FALSE, based on our research. While a maneuver with that name exists and is performed by the Blue Angels, the image posted on Facebook is a digital drawing from 2015 and is not based on the maneuver, the artist told USA TODAY.