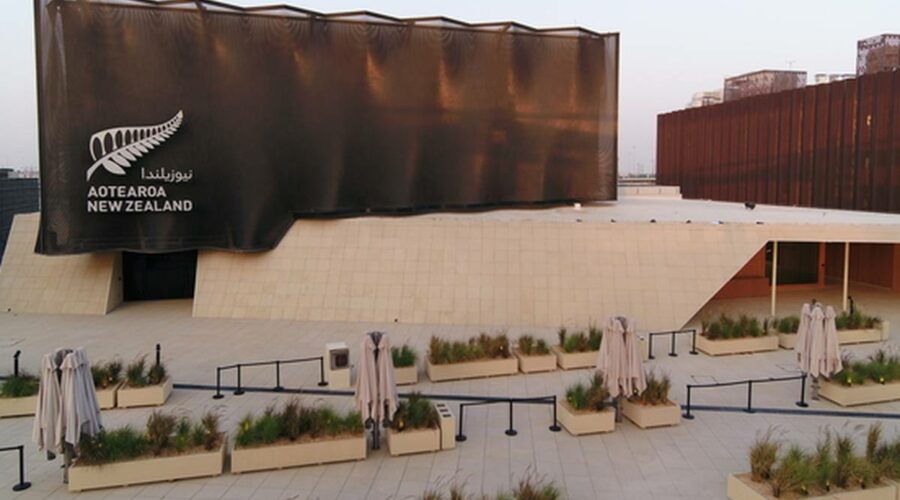 The New Zealand pavilion at Expo 2020 Dubai has had its mesh exterior fitted ahead of the opening of the event next week.

The pavilion is the centrepiece of New Zealand’s $62 million trade and cultural push at the world event that was delayed for a year because of the pandemic.

Designed by New Zealand architects Jasmax, the pavilion has what is described as akinetic facade made from a unique architectural mesh called Kaynemaile.

The New Zealand Trade and Enterprise push into world markets for the six-month duration of Expo will see hundreds of government staffers, business people, entertainers and some politicians attend the event.This has led to complaints from some returning Kiwis who will be displaced from MIQ spots.

The “living” facade reinforces the New Zealand Pavilion’s theme of “Care for People and Place”, which is based on kaitiakitanga, the environmental ethos of Māori and the understanding that humans and nature are inextricably connected.By entering the pavilion, the visitor re-connects to the mauri, or life principle, inherent in nature’s order.

The New Zealand Pavilion story is inspired by the Whanganui River, which in 2017 was given legal personhood after decades of negotiation between the iwi (tribe) Te Āti Haunui-a-Pāpārangi and the New Zealand Government.

The legislation recognises the river as a living and indivisible physical as well as spiritual whole – Te Awa Tupua – flipping the existing paradigm by placing the River as the focus of human interaction in line with Māori values and world view.

“Every element of the pavilion is interconnected; from the immersive visitor experience and storytelling rooms inside the pavilion to the pulse, which starts in our river room and ripples all the way to the exterior facade. This is the life force of our story – a story of a nation of innovators who Care for People and Place,” said Clayton Kimpton, New Zealand’s commissioner-general to Expo 2020 Dubai.

The pavilion features a visitor experience, a restaurant showcasing New Zealand food and beverage and hosting facilities and is in Expo 2020’s Sustainability District.    Creative Parris Goebel will curate New Zealand’s entertainment and cultural programme for the event which will see around 100 entertainers pass through the pavilion over the next six months.

Expo 2020 Dubai is the first World Expo to be held in the Middle East, Africa or South Asia region and 191 nations will participate.

New Zealand committed to the event under the last National government and it is hoped to show the country is “open for business” in spite of continued tough border restrictions.

Matt Glubb, principal at Jasmax said the architectural mesh on the façade that ties together the overarching experience of the pavilion.

“It not only expresses our interconnectedness but also the idea that we are indivisible from the natural world, through its pulsating movement that extends from the centre of the building all the way to the exterior of the façade – making the building appear alive.”

The facade visual effect is designed by Kayne Horsham, creator of the Kaynemaile architectural mesh which was inspired by his work on the Academy Award-winning Lord of the Rings trilogy.

As art director for creatures, armour and weapons, Horsham was responsible for designing the chainmail in the films and became captivated by the kinetic effects of the material.

The final product, which took six years to perfect, is crafted from lightweight polycarbonate using a patented injection moulding process.

Kaynemaile and its design studio have evolved to be used by architects around the world to create, divide and protect building interiors and exteriors.

Horsham, chief executive of Kaynemaile said the mesh also reduces by up to 70 per cent the radiant heat transfer from direct sunlight to internal environments, thereby reducing pressure on installed cooling systems.

Kaynemaile was installed by a team of 14 experts. The process of installation took 22 days, with the biggest mesh piece weighing just 850kg but is 25m in height.

The total pavilion footprint is about 2000sqm.More than 350,000 work hours have been spent on site since New Zealand first broke ground.