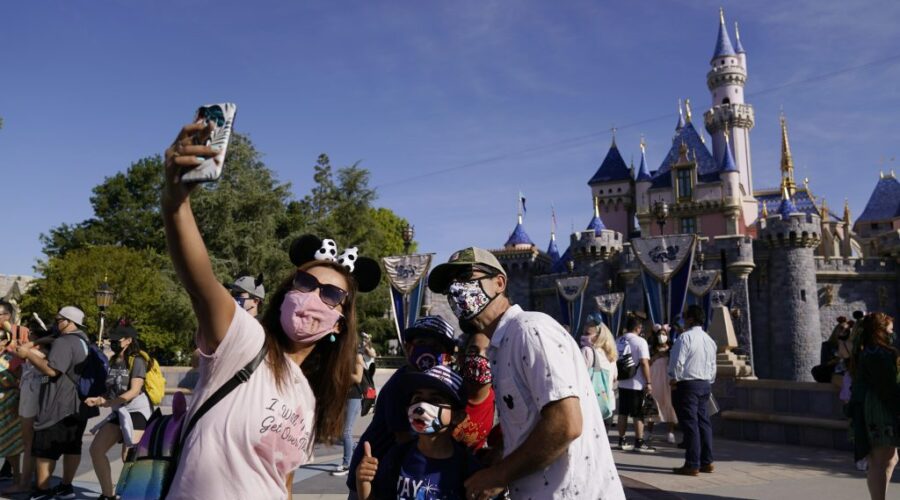 UPDATED with latest: Disneyland will no longer require fully vaccinated guests to wear masks beginning Tuesday, June 15. A Disneyland announcement says masks will not be required indoors or outdoors in the park for those persons. Guests will need to self-attest that they are fully vaccinated. Non-vaccinated guests ages 2 and up will, however, be required to wear masks indoors, except when dining.

All guests will be required to wear masks when riding the shuttle in from (or out to) the Toy Story parking lot, which reopens Friday.

The announcement coincides with California’s loosening of restrictions on businesses and individuals beginning tomorrow. While the California requirement for businesses could potentially change with a ruling from a Cal/OSHA safety board, that is highly unlikely. California Gov. Gavin Newsom said Monday he will sign and executive order on Thursday — after the board’s meeting — that will let fully vaccinated workers go maskless.

PREVIOUSLY on May 26: Disneyland announced today that, for the first time since the park reopened last month, out-of-state visitors will be allowed. The effective date of the announcement, June 15, is also the date California will lift all capacity and socials distancing restrictions.

The announcement reminds guests that everyone needs to wear a mask throughout Disneyland Resort — which includes the park-adjacent hotel properties the company runs. In addition, says Disney, “The State of California strongly recommends that all guests be fully vaccinated or obtain a negative Covid-19 test prior to entering the theme parks.” That would seem to be more of a request to park guests than an order.

In order to make planning more amenable to out-of-state guests, the park has extended its reservation window.

The other announcement from the park on Wednesday was the planned reopening of the reimagined Jungle Cruise ride on June 16. That puts the ride’s reopening about six weeks ahead of the July 30 bow of its Dwayne Johnson-starring Jaume Collet-Serra-directed film of the same name.

PREVIOUSLY on May 18: In the time of Covid, all good news seems to come with a caveat. Tuesday’s announcement that Orange County has met the requirements to move from California’ Orange, or moderate, reopening tier to the Yellow, or minimal, tier was a case in point.

Initially, officials thought they had to wait 48 hours, but that rule has been dropped and they confirmed they could reopen in the Yellow tier on Wednesday. It’s unclear why there was confusion on this tier movement when Orange County has made two similar moves in the past few months.

In any case, the county will allow businesses to loosen restrictions starting Wednesday, which means Anaheim-based Disneyland could increase capacity by 40%. For more on that, see below.

PREVIOUSLY at 1:24 p.m.: While California generally allows counties to move into a new tier 24 hours after they qualify, O.C. officials offered conflicting assessments of when the county would loosen the rules. That, of course, has an impact on businesses in the region and when they can expand capacity, including Disneyland — more on that below in this story’s original draft.

Dr. Clayton Chau, director of the Orange County Health Care Agency, indicated in a memo to county supervisors that businesses could reopen in the Yellow tier on Thursday, even though in the past the county has allowed reopenings on Wednesdays, the day after tier assignments are revealed.

County Supervisor Don Wagner said the move into the Yellow tier was “a long time coming and should have been done two weeks ago. This is the reward and I would rather see it happen tomorrow than later,” said Wagner.

The county itself issued a press release indicating that the move to Yellow will be effective on Wednesday:

“Today, the California Department of Public Health (CDPH) announced that effective May 19, 2021, Orange County (OC) will move into the Yellow Tier of the State’s Blueprint for a Safer Economy. This means that most businesses in OC will be allowed to increase their operational capacity.” `

PREVIOUSLY at 12:24 p.m.: Disneyland reopened on April 30 to a crush of visitors as tearful fans lined up to get into the Anaheim park for the first time in over a year. There may soon be more room.

Five counties moved to a less restrictive tier in California’s reopening Blueprint on Tuesday, although local public health departments may implement policies that are more restrictive than the state. Among those that moved to the Minimal or Yellow tier was Orange County, where Disneyland is located. That means that the park can up capacity by 40%, from 25% of full attendance to 35% — see chart below.

Under California rules, once a county meets the two-week data requirements for a new tier, businesses may expand capcity 24 hours later. While some counties, like L.A., have waited an additional 24 hours or more beyond that, Orange County has generally allowed businesses to reopen as soon as the state allows. Given the enthusiastic support from local public officials, it’s probably safe to assume O.C. will allow an expansion on Wednesday.

Whether the park will make that move is another story. Amid all the conflicting news about reopenings in California, Disneyland has taken a cautious approach. In late April, California quietly updated its travel guidance in a way that could have been read as allowing fully-vaccinated out-of-state visitors at theme parks. See this page of travel guidance, which is referenced in the chart below.

Disney officials and those at other parks took the cautious approach, keeping the gates closed to out-of-state visitors. That approach will likely pertain in the near future, as well. The park’s official policy on the matter still stood as of Tuesday, and nothing in the new Yellow tier rules wold seem to demand a change. Read Diensyland’s policy here.

Deadline did obtain confirmation from CA officials that parks are allowed to reopen to interstate visitors, but the stance has never been clarified in detail. As the confusion over the recent CDC mask guidance has shown — and the contentious recent history between theme park and state officials demonstrates — a cautious approach is often best when it comes to reopenings. And it’s not like the park won’t be able to sell out anyway.