Death of a Salesman, Arthur Miller’s classic tragedy of the American Dream gone sour, is revitalized and given room to encompass the Black experience in director Miranda Cromwell’s intriguing production opening at the Hudson Theatre on Broadway tonight. Boasting flat-out terrific performances – Wendell Pierce as Willie Loman and the amazing Sharon D Clarke as his wife Linda – this Death of a Salesman doesn’t so much reinvent Miller’s masterpiece as open its doors to perspectives that enrich the material.

The script is unchanged – and surprisingly accommodating to the fresh point of view – with Cromwell and composer Femi Temowo lacing the show with markers of mid-20th Century Black life – the sounds and movement of jazz, blues and gospel, most notably – infusing the production with a legacy and identity all its own.

The wrenching, beaten-down performance of Pierce (The Wire, Broadway’s The Piano Lesson) and Clarke’s heartbroken but stalwart Linda (the Olivier Award winning actress brings the wounded but enduring fierceness that marked her stunning Caroline, Or Change performance) make clear that this family’s dogged pursuit of an elusive American Dream can never be fully considered without attention paid, and respect given, to their Blackness.

Notable too are the more fanciful flashes of non-realism – Death is largely a memory play, after all, and Cromwell makes clear that memory, particularly Willie Loman’s, is as unreliable as any dream. When Willie daydreams – or hallucinates – about the high school golden days of son Biff, he sees his son ever in full uniform, striking trading card poses to the rhythms of flashbulbs. (That actor Khris Davis, as Biff, oversells the youthful golly gosh boyishness is maybe justifiable but, on more than one occasion, grating).

The revival opens with the entire cast, secondary players and all, appearing ghostlike to sing a bluesy gospel song as mournful as it is hopeful, a foreshadowing perhaps of a funeral dirge to come, the various sticks of the Loman household furniture hovering high above the stage waiting to descend and take us back to 1949.

The plot remains as always: Willie Loman, a traveling salesman who, at 63 was already considered elderly (remember, Blanche DuBois’s youth had gone up the waterspout at 30) is breaking down physically, emotionally, mentally and financially, no longer remembered (much less well-liked) by the clients he pesters in far-off cities, his income a fraction of what it was, bills mounting and the hope he once placed in his two now-grown sons diminishing by the day. 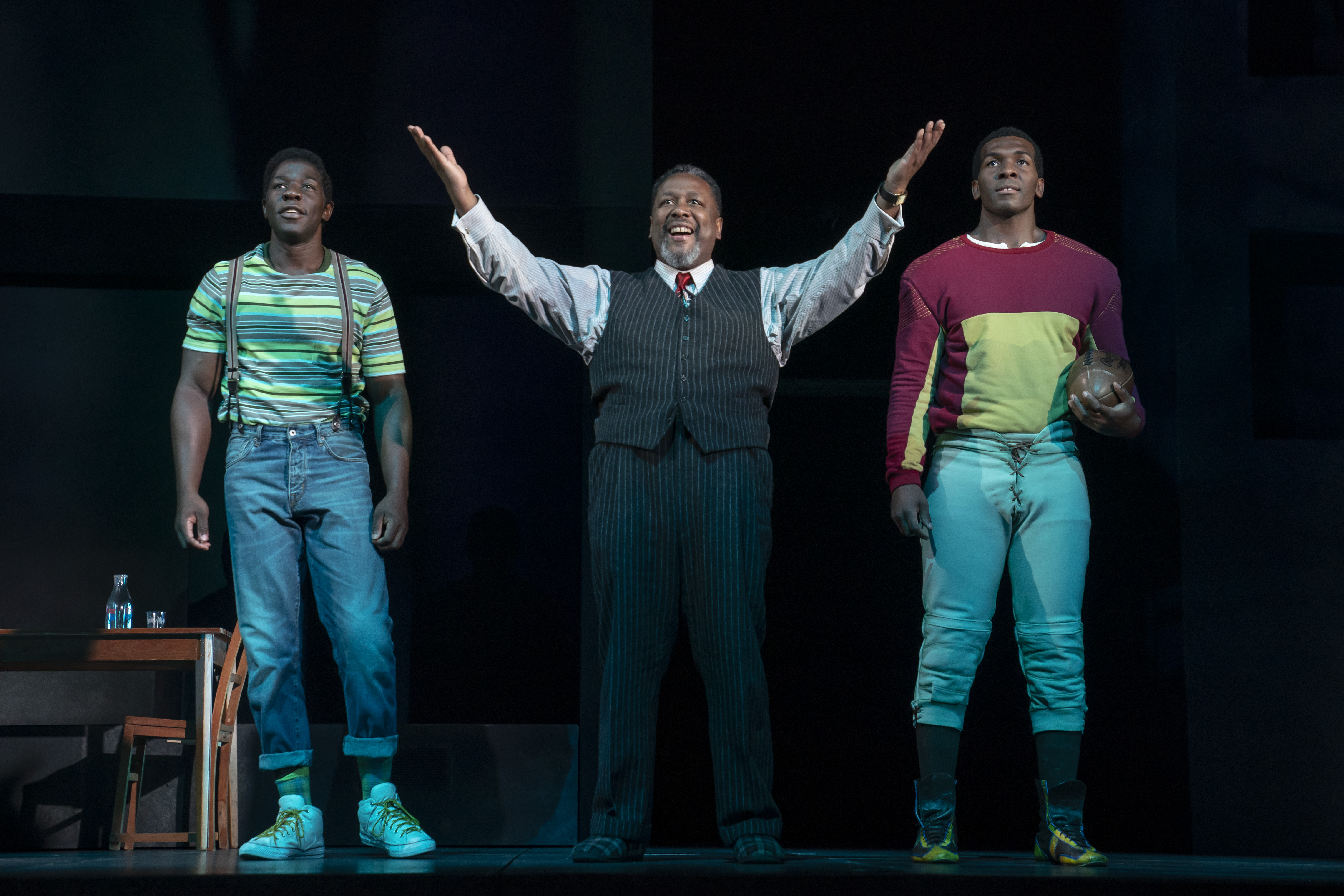 But weighing on Willie’s mind more than anything is the emotional gulf between himself and his eldest and favorite son Biff, brought to the fore now that the aimless and troubled young man has returned home for a visit. To say Biff never lived up to his high school promise – or his father’s burdensome expectations – is an understatement. Biff, who wants nothing of the business world his father favors, but instead dreams of outdoorsy farm work, has been unable to hold a job of any kind since flunking out of high school, a failure entirely wrapped up in his crushing disappointment in his own once-beloved father: Biff, on the eve of his high school graduation, caught Willie with another woman.

If that sole instance of infidelity – at least, the sole one discovered – today seems a bit, well, unlikely to support a couple decades of rancor and ruined promise, Miller’s canniness in creating a mood that, even when Death was new, seemed infused with nostalgia helps smooth over some of the dated values.

But this production stumbles in at least one way: As played by Davis, the adult Biff seems forever 17, in manner and emotional development. For Salesman to work at its utmost, the psychic duel between father and son must unfold on a level playing field: Of course we can’t help but side with the sad, pathetic and basically decent-hearted Willie, but Biff’s distance should be at least relatable, the pain and disappointment and sorrow of a son who has lost his hero. Here, Biff just seems petulant and immature. It’s the production’s most serious emotional misfire.

Even the eccentric performance of the ever-fascinating André De Shields, who seems to have ambled in directly from the Hadestown underworld, as Willy’s ghostly brother Ben manages to seem an irresistible adornment to the fierce emotional naturalism of the primary performances – Pierce, Clarke and, as the overlooked son Happy, the terrific McKinley Belcher III. (Also of note: Delaney Williams’ Charley, the neighbor who remains loyal to his friend Willie through many arguments and years of bickering; here again, race is an undercurrent: Charley is white, lending his overtures of assistance to the proud Willie newfound texture).

There are other flaws in the production, notably a tendency to pad the sentiment and overdo certain rather gimmicky flourishes – the abrasive laugh of that long-ago other woman that echoes in Willie’s brain (and throughout the theater) is more sitcom punchline than haunting, and moments like when the entire cast suddenly glitches like malfunctioning robots come off like remnants of a brainstorm session that would have been better abandoned, all the better to trim an overlong three-hour and 10-minute running time.

Missteps aside, this Death of a Salesman offers up a vital, fresh take on an American classic, making it all the more American for its inclusiveness, and as classic as the towering performances of Wendell Pierce and Sharon D Clarke.