Countries are being forced to use extreme measures to keep the economy afloat amid the coronavirus crisis.

Now, the Bank of England has signalled that it may take the cost of borrowing below zero.

Last month, the Bank started new work on how negative interest rates could affect banks and the wider economy.

But what exactly are negative interest rates? And could a world where savers are penalised and borrowers rewarded end up doing more harm than good?

What are negative interest rates?

The term “interest rates” is often used interchangeably with the Bank of England base rate.

Described as the “single most important interest rate in the UK”, the base rate determines how much interest the Bank of England pays to financial institutions that hold money with it, and what it charges them to borrow.

High street banks also use it to determine how much interest they pay to savers, as well as what they charge people who take out a loan or mortgage.

The Bank of England usually lowers interest rates when it wants people to spend more and save less.

It cut them to a fresh low of 0.1% in March to try to stimulate the economy amid the coronavirus pandemic. 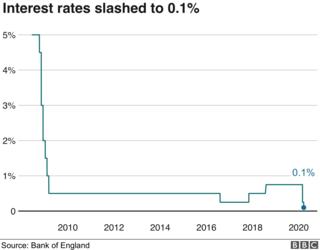 In theory, taking interest rates below zero should have the same effect. But in practice, it’s a bit more complicated.

After all, why would anyone pay to stash money in a savings account or lend someone money, when they can keep the cash at home for free?

The Bank of England’s number one job is to keep prices across the economy rising steadily every year.

This is known as the Bank’s inflation target, which is set at 2% by the government.

While this means the cost of living is rising more slowly, if inflation remains low for too long, bosses start factoring that into pay reviews. This can then dampen consumer confidence and spending.

Central banks have been cutting interest rates to spur inflation for years. But as rates approached zero across the developed world, a handful went a step further.

Sweden, Switzerland, Japan and the 19 nations of the eurozone all took interest rates below zero.

In Switzerland, negative interest rates have also helped to discourage investors from pouring money into the country during times of uncertainty.

How will this affect savers?

The average UK instant access account pays just 0.45%, according to the Bank of England, while accounts that require you to lock your money away currently offer an average return of less than 1%.

In countries with sub-zero interest rates, commercial banks have passed them on to big companies.

However, the evidence suggests there is a very high bar to pass the pain on to ordinary savers.

Christina Nyman, chief economist at Swedish lender Handelsbanken, says charging savers to put money in their own accounts is seen as “taboo” in Sweden.

She says: “Competition is fierce, and households are ready to move their money to another bank, so nobody wants to lose business.”

In Germany, where some banks impose charges on deposits of more than €100,000 (£90,000), some people have started stashing their money in vaults.

According to Germany’s central bank, physical cash holdings by families and businesses there have almost trebled to €43.4bn since the European Central Bank (ECB) introduced a negative deposit rate in 2014.

But David Oxley at Capital Economics says there hasn’t been a wider shift towards cash because most people still prefer the security and convenience of keeping it in the bank.

Putting it in a vault “runs the risk of the money either being lost, stolen, or damaged,” he says. “Bank deposits cannot catch fire, but banknotes can.”

James Pomeroy, an economist at HSBC, says this was only possible because of the nature of the mortgage market.

When someone in Denmark applies for a home loan, Danish banks act as a middleman between potential borrowers and investors.

“In Denmark the banks don’t take the hit, investors do,” says Mr Pomeroy. “Banks are then charging higher product fees, so have actually made money off of this.”

But negative rate mortgages are unlikely to be offered in the UK any time soon.

When UK interest rates were slashed to 0.5% in March 2009, some borrowers thought they could be in line for a payment.

Around 1,500 Cheltenham and Gloucester customers had a mortgage that tracked 1.01 percentage points below the Bank of England base rate.

But any prospect of a windfall was quickly dashed when financial regulators described interest payments as “a one-way obligation on the borrower”.

What are the side effects of negative interest rates?

Negative interest rates hit bank earnings by squeezing the gap between the money they make on loans and what they pay to savers.

“If not passed on to customers, negative rates would hurt bank profitability, especially at a time when they are expected to be hit by crisis-related loan losses,” says Danae Kyriakopoulou, chief economist at the Official Monetary and Financial Institutions Forum (OMFIF).

Negative interest rates pose a particular challenge to building societies, which hold around £1 of every £5 in British savings accounts.

While commercial banks can access cheaper borrowing by tapping financial markets, building societies must raise at least half their funding from individual savers.

The Bank of England is in the process of assessing the impact of negative rates on UK bank and building society profits, as well as how they affect insurers and pension funds.

It is examining whether changing a scheme that rewards small business lending with access to cheap money, or shielding a share of the money high street lenders park at the central bank from negative rates, can help to offset the hit to profits.

Ms Kyriakopoulou says more work needs to be done before negative rates can be deployed in the UK.

“One advantage in the UK, compared to say the euro area, is that we’ve seen strong coordination between the Treasury and the independent Bank of England in terms of their crisis response measures,” she adds.

28/09/2020 Business Comments Off on Could you have to pay your bank to save money?
World News

Boy, 14, arrested for ‘brutally murdering his own mom after inflicting horrific wounds'

Bank for International Settlements Set to Trial Own CBDC