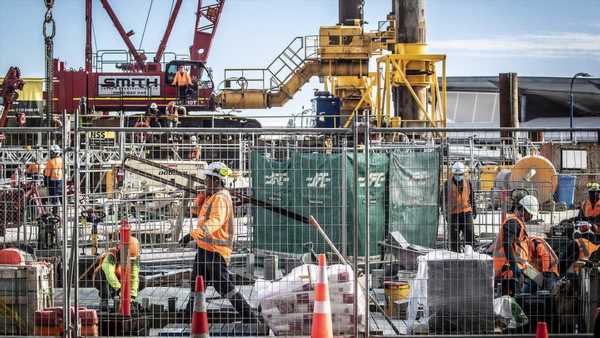 The economy is expected to grow at a healthy clip and unemployment to fall close to 4 per cent in the coming years, with a big increase in infrastructure spending driving rosy forecasts from the Treasury.

Finance Minister Grant Robertson’s 2021 Budget includes $57.3 billion in infrastructure spending between 2021 to 2025, increasing what was already a large increase in the 2020 Budget.

As well as further boost in funding for rail, including $85 million for carriage assembly at Hillside in Dunedin, more than $630m for school property, $300m for Scott Base and another $300m for the Green Investment Fund.

After a severe recession in 2020, the economy is expected to expand by 2.9 per cent this year, accelerating to 4.4 per cent in 2023, growing at an average of around 3 per cent over the next four years.

Treasury predicts unemployment will fall to 4.2 per cent by 2025, only marginally above what it was before Covid-19.

“New Zealand has been through a health and economic shock,” Finance Minister Grant Robertson told a Budget lockup at Parliament, ahead of the official release. “The economy will grow strongly from here.”

A stronger overall economy means that while spending climbs, the forecasts are stronger than in the last update in December.

The Crown is expected to continue to run a deficit until at least 2027, debt levels are lower than the last forecast.

Thursday’s Budget sees net core Crown debt peaking at $178.5b, around $10b lower than was expected in December, equivalent to 48 per cent of GDP.

A year ago, just as New Zealand emerged from lockdown, Treasury was forecasting unemployment to rise to close to 10 per cent with net Government debt rising above 50 per cent of gross domestic product.

Economists quickly warned that – perhaps ironically – because unemployment is likely to be even lower than the forecasts predict, there may not be the available workers to facilitate the investment, meaning growth may ultimately disappoint.

“The question mark comes over the capital expenditure part of the Budget,” BNZ head of research Stephen Toplis said.

“You’ve had a massive increase on what was already a massive capital expenditure programme, and as well all know the single biggest constraint to doing anything in New Zealand is the supply of labour.”

Already the figures are out of date. Treasury’s forecasts assumed that unemployment would be 5.1 per cent at the end of March, when in fact it fell to 4.7 per cent.

Toplis said as well as suggesting growth could ultimately be lower than expected, low unemployment tended to mean inflation would be higher.

“I think that’s a balance between them wanting to be somewhat conservative, and keeping a bit of cash back, but also an inability to deliver a whole lot more,” Olsen said.

“This is a very sharp adjustment, but a necessary one,” Robertson said.