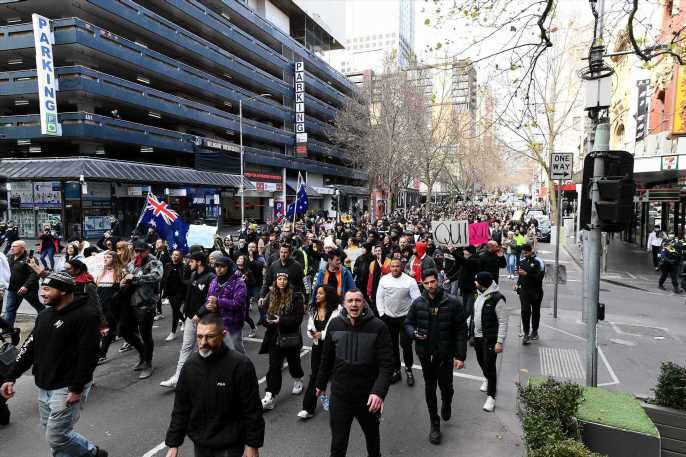 Australia's most populous state reported a rise in new Covid-19 cases on Monday despite a weeks-long stay-at-home order, while police vowed to crack down on any repeat of a wild anti-lockdown protest at the weekend.

New South Wales, which has had more than 5 million people in Sydney city under lockdown for a month, reported 145 new cases of the virus, from 141 a day earlier, as it struggles to contain an outbreak of the highly contagious delta variant.

Of particular concern, 51 of those newly diagnosed were active in the community before testing positive, raising the risk of transmission. The authorities have said they want that number near zero before lifting the city's most restrictive lockdown of the pandemic at a July 30 target date.

"Some settings might change. We might need to go harder in some areas and release some settings in others," state premier Gladys Berejiklian said at a televised news conference. She added that she would give an update on movement restrictions in the next few days.

Covid cases are rising again in all 50 states across U.S. as delta variant tightens its grip

About 100 U.S. athletes in Tokyo unvaccinated as Covid-hit Olympics begin

After being ravaged by the delta Covid variant, how is India doing now?

At the weekend, thousands of people marched in an anti-lockdown protest which turned violent in central Sydney, an event that state chief health officer Kerry Chant called "distressing".

As images and videos of the protest circulated on social media, including one image of a man apparently punching a police horse in the head, state police commissioner Mick Fuller said some 10,000 people had called the police hotline to report people suspected of breaking lockdown orders.

The calls to police were "an amazing outcry by the community, not just in terms of their disgust at the protest but at the way the police were treated", said Fuller.

Police knew of plans for a repeat protest and similar behavior "won't be tolerated again", he added.

Victoria state, also under lockdown, reported 11 new cases, although all were in quarantine during their infectious period. Authorities said they would decide the next day whether to lift restrictions as hoped.

Neighboring South Australia said it was on track to exit its snap one-week lockdown on Wednesday, after reporting one new local case, also in quarantine through their infectious period.

The outbreak, sparked by an infected airport transit driver in Sydney last month, has resulted in thousands of new cases of the fast moving delta variant and reimposed lockdown on more than half the country's 25 million population.

With only about 16% of Australians aged over 16 years so far fully vaccinated, the country's main drug regulator on the weekend changed its recommendation to encourage wider take-up of the AstraZeneca vaccine.

The Australian Technical Advisory Group on Immunization (ATAGI) had previously recommended restricting the AstraZeneca shot, the main vaccine in the country's immunization arsenal, to people aged over 60 due to an extremely rare risk of blood clots in younger people.

Many Australians including those over 60 have opted to wait for an alternative made by Pfizer which has had its use restricted to people aged 40 to 60 due to supply constraints.

ATAGI on the weekend recommended that all adults in Sydney should now "strongly consider the benefits of earlier protection" with the AstraZeneca jab.

The move was supported by lawmakers, with Federal Treasurer Josh Frydenberg telling reporters that "getting vaccinated is our ticket out of this crisis".

AstraZeneca welcomed the change, saying regulators around the world had "stated that the benefit(s) of using our vaccine significantly outweigh the risks".

With about 32,900 cases and 918 deaths, Australia has kept its coronavirus numbers relatively low although the delta strain and low vaccination numbers among developed economies have worried residents.