On Christmas Eve, Bitcoin wallet RelayX announced the RelayX Card, “the most powerful debit card ever issued” on Bitcoin SV (BSV). RelayX users can be one of the first to pre-order the initial 1,000 cards for $35 worth of BSV. 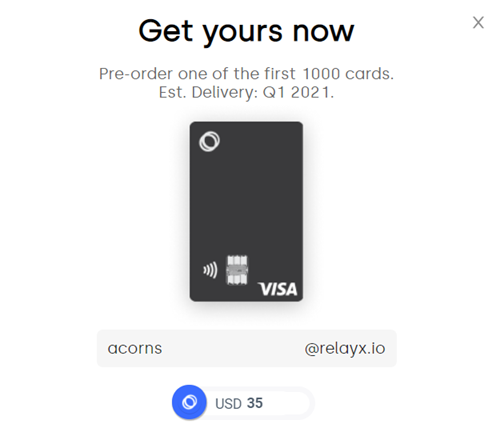 Simply enter your 1handle and swipe the button above to pre-order, cards are planned to arrive in Q1 of 2021.

The card will have novel features like a built-in paymail, enabling immediate direct deposits from other wallets and applications. To top up your debit card balance send as little as 1 cent of BSV to your [email protected] This top up feature is extremely powerful as one could set their payout addresses in applications like Streamanity and TonicPow to save BSV that can be immediately spent at any merchant who accepts Visa if desired.

Digital currency debit cards have been launched before with little success, but another feature that distinguishes the RelayX Card is the Relay X Card (RXC) token. The naming of the token appears to be a competitive jab at fellow wallet provider Money Button and their founder Ryan X. Charles.

The incentive to top up the card (thus providing liquidity to RelayX) is to earn the RXC token as rewards (i.e., cashback). RelayX states that 50% of all tokens will be distributed to those who have bought the card, claiming the reward token to be ‘the most transparent’ card reward program to date. Of course, this must mean that RelayX plans to launch this token publicly on the BSV ledger and given their previous two token implementations (USDC and OKBSV) this reward program could be implemented on Run.

Interestingly, RelayX states they will buyback and burn the tokens with 15% of the revenue they earn with more details to come prior to official launch of the card. The Medium article also states that this is not an ICO and the RXC tokens have no monetary value—yet if the card holders truly own their tokens then these markets could develop in interesting ways.

The difference with such a reward program is that unlike Delta SkyMiles, American Express Membership Rewards, and cash back programs for example, customers cannot freely trade these rewards to others. In fact, these companies typically explicitly block this type of activity in their terms and conditions.

A market here has huge potential as people may find a trade of US$1,000 for 100,000 SkyMiles between each other beneficial if they want to purchase a first class flight ticket that would cost US$1,200 for 100,000 SkyMiles. Practically, users could atomically swap different tokens in a trustless manner (ex. RXC for USDC) using the Run protocol as described here: These markets could run wild on BSV and be very profitable ventures for those with reward points. How many reward point systems are just ledger entries on a bank’s database instead of tradeable, liquid assets that people truly own?

During the pandemic travel points became devalued overnight as countries around the world closed their borders and hotels closed. If point holders had access to freely trade them, they could let speculators buy them for cash. I look forward to these markets being developed on Bitcoin and how RelayX (once again) trail-blazes these in these efforts.