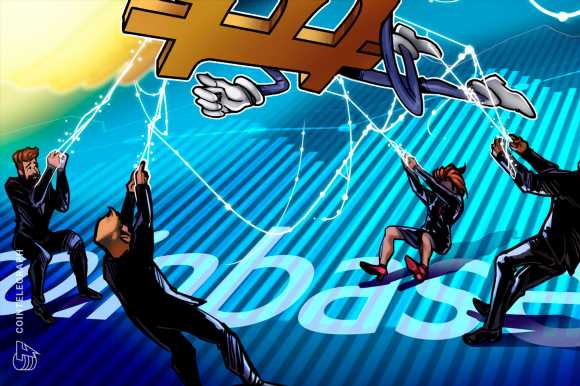 Bitcoin (BTC) fell to $21,000 on July 26 after it emerged that major the United States cryptocurrency exchange Coinbase was under investigation. 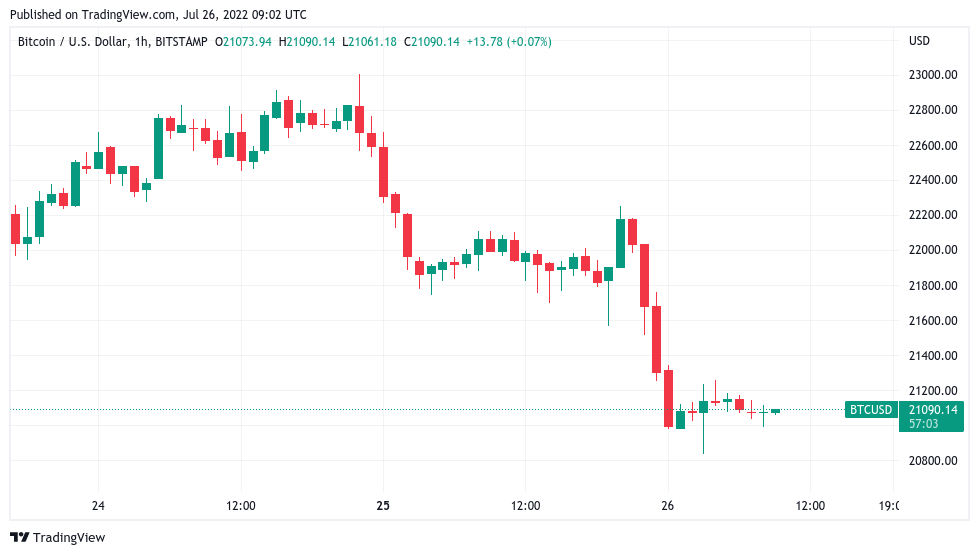 Data from Cointelegraph Markets Pro and TradingView showed a swift reversion to lower levels for BTC/USD as reports emerged of fresh legal problems for Coinbase over securities trading.

The U.S. Securities and Exchange Commission, Bloomberg originally reported, was looking into whether the exchange had allowed users to trade unregistered securities.

Part of a wider battle between the U.S. crypto industry and regulators over compliance, the move appeared to frighten the market, coming amid parallel allegations that a former executive conducted insider trading.

With that, Bitcoin was back to defending $21,000 as support on the day, with commentator Mark Cullen stressing that the level must hold for bulls to stay in control.

“The 21k level for BTC is super critical for the bulls to hold if they have any hope of this regaining a bullish posture,” he told Twitter followers:

“A 4hr close below there and the bitcoin ball is well and truly in the [bears’] court.”

Trader Crypto Tony eyed a slightly lower level as a short-term floor, warning that a “drop deeper” was nonetheless a likely future outcome.

For its part, Coinbase had been anything but passive in the U.S. regulatory debate, last week releasing a dedicated blog post on why the SEC should change course.

“If the Commission starts an open process where all of us can provide input, we look forward to sharing our thoughts on how to answer the important questions our petition raises, and we would encourage others to do the same,” chief policy officer Faryar Shirzad wrote:

“We may not agree every step of the way, but it’s critical that this is an open and transparent process, where the public has a chance to offer their views. Policymaking at this level is far too important to be made in a black box.”

Coinbase shares were down 3.7% pre-market, adding to 5.3% losses the previous day.

Trader warns Ether could “take out lows” next

A similar mood was visible on altcoin markets, with fellow account TraderSZ forecasting a return to $1,000 for Ether (ETH) even before the bulk of Bitcoin’s losses materialized.

Related: Will the Fed prevent BTC price from reaching $28K? — 5 things to know in Bitcoin this week

ETH/USD, previously the best performer in the July crypto market rebound, traded at just over $1,400 at the time of writing. Versus its peak on July 24, the pair was down 15%. 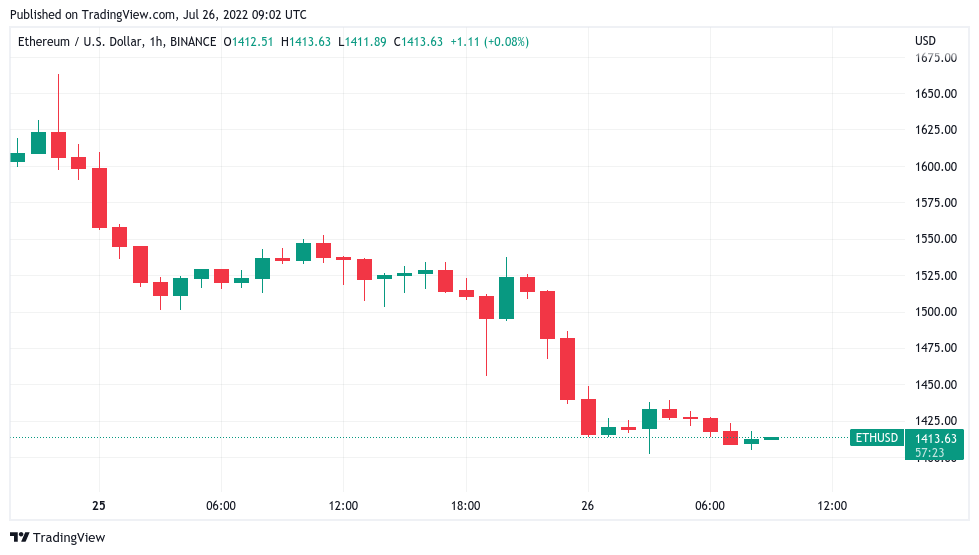 On July 25, TraderSZ warned that Ether and Bitcoin could both soon challenge lows, the latter aiming for $18,500.