In his latest appearance on the Quoth the Raven podcast Oct. 16, Lepard said that BTC/USD could “easily” deliver 100X returns from current prices.

Lepard: “I personally believe Bitcoin’s going to go up 100X”

With Bitcoin in a downtrend for almost a year, bullish BTC price predictions are few and far between.

Lepard, already known for his optimism on both Bitcoin and precious metals, has become one of the lone voices forecasting a seven-figure BTC price tag in the current environment.

In his podcast appearance, the Equity Management Associates founder revealed that he is still dollar-cost averaging into BTC — buying a fixed amount every week, regardless of the price.

He also views it as a “risk” not to own BTC as a hedge in what he calls a “sovereign debt crisis.”

“I’m not suggesting anyone should take all of their money and dump it into these things, but what I am suggesting very strongly is that anyone who doesn’t have some position in these things is taking more risk than they need to take because of the upside optionality,” he explained:

“Bitcoin could go to zero but I personally believe Bitcoin’s going to go up 100X.”

Asked whether he, therefore, agreed that a single Bitcoin could end up being worth $2 million — one hundred times more than the current spot price — Lepard did not hesitate.

“Yeah, easily, easily,” he replied, setting the timeframe for the gains to materialize as five or six years.

Lepard added that the next macro top for BTC/USD should be up to $200,000, followed by another 70% drawdown.

That prediction is roughly in line with another price basis emerging in recent days, putting the next cycle’s bear market bottom at $35,000.

BTC/USD traded at around $19,600 at the time of writing, data from Cointelegraph Markets Pro and TradingView showed, having hit one-week highs on the day 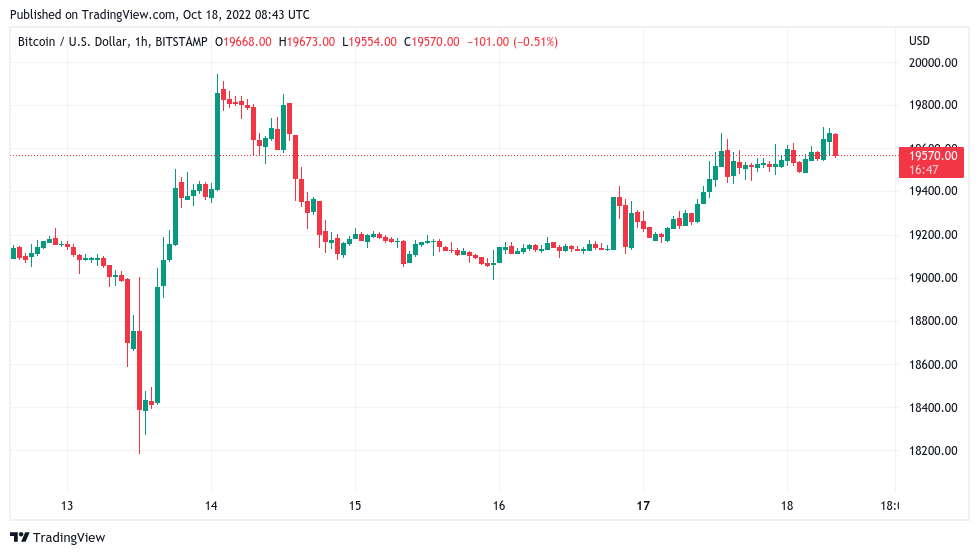 Lofty perspectives on BTC price performance are historically nothing new to the space, but few have ended up coming true.

Related: ‘Get ready’ for BTC volatility — 5 things to know in Bitcoin this week

Among those yet to be vindicated are serial investor Tim Draper, who even recently remained confident about Bitcoin reaching $250,000 in 2022 or early 2023.

In April, Cathie Wood, CEO of ARK Investment Management, doubled down on a $1 million BTC target.

Prior to that, meanwhile, Tom Lee, co-founder of Fundstrat Global Advisors, maintained the firm’s $200,000 BTC price target despite the bear market already knocking.

Closer to home, meanwhile, $14,000 has become a popular downside target, one which Lepard himself shares.

He said that he would “back up the truck” should BTC/USD reach that level.