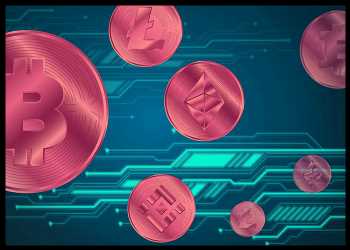 2022, till date, has been both market cap decretive and hierarchy disruptive for the crypto asset class. Market capitalization has fallen from $2.25 trillion at the beginning of the year to $1.74 trillion, and most of the cryptocurrencies have witnessed a change in rankings over the past four months. From among the top 25 crypto currencies, only Bitcoin, Ethereum and Dogecoin have retained the overall rankings prevailing at the onset of 2022.

Bitcoin is currently trading at $38,247.73, having dropped 1.63 percent in the past 24 hours. Though Bitcoin has been the undisputed market leader ever since the crypto market emerged, BTC has seen its dominance range between 39.3 percent touched in the middle of January and 43.3 percent recorded in early March. The leading cryptocurrency’s market dominance is currently at 42.1 percent.

Ether is currently trading at $2,823.62, edging down 0.14 percent in the past 24 hours. ETH has been occupying the second slot among all cryptocurrencies from as early as 2016.

Tether (USDT) is occupying the third slot with a market cap of $83 billion. In the beginning of 2022, the most valuable stablecoin was ranked fourth among all cryptocurrencies.

BNB is trading near $385 and ranks fourth now among all cryptocurrencies. In early January, the coin was trading near $530, and was ranked third overall.

5th ranked USD Coin (USDC), the second among all stablecoins has jumped two notches in the past four months.

XRP is ranked in the 6th position, with a market capitalization of close to $30 billion. The coin has improved two slots since early January.

Cardano (ADA) has dropped 3 ranks in the past four months and is now reckoned 9th among all cryptocurrencies. ADA is currently trading at $0.7881, up 0.69 percent on overnight basis.

Market capitalization of TerraUSD (UST), the stablecoin of the Terra blockchain jumped from $10 billion and 22nd rank on January 2 to $19 billion and 10th rank currently.

Other big gainers in the subset of top 25 cryptos are UNUS SED LEO (LEO) that has jumped 22 ranks, FTX Token (FTT) that has risen 11 slots, TRON (TRX) that has improved 7 notches, Dai (DAI) that has gained 6 ranks, as well as Binance USD (BUSD) and Near Protocol (NEAR) that have advanced 5 notches each. Bitcoin Cash (BCH) gained 2 ranks whereas Wrapped Bitcoin (WBTC) bettered its rank by one notch.

The competition among the several cryptocurrencies for market share and market dominance is perhaps more intense than the competition between cryptos and other asset classes in the wider financial landscape. Technology, scalability, price volatility, usefulness and the environmental impact have been the major defining metrics in this war in the digital asset market place.

03/05/2022 Bitcoin Comments Off on How Disruptive Has Been 2022 For Crypto World’s Hierarchy?
Markets