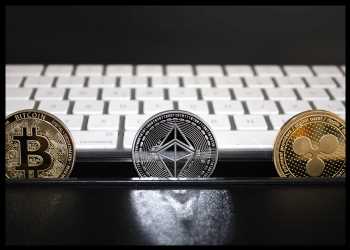 Cryptocurrency markets have edged down in market capitalization ahead of release of crucial inflation data for December from the U.S on Wednesday. Aggregate market cap is currently at $1.91 trillion, close to the $1.90 trillion level touched on Saturday.

Annual inflation rate in the US had accelerated to 6.8 percent in November of 2021, the highest since June of 1982 quickening the Fed’s pace of policy normalization. The December reading is seen breaching the 7 percent level and is expected to usher in faster and larger interest rate hikes in 2022 and beyond. Friday’s jobs report too indicated strong labor market conditions and appears to drive the Fed to its aggressive stance of monetary policy normalization.

The imminent end to an easy monetary policy regime has been haunting cryptocurrency markets of late. Together with the unrest in Kazakhstan, an important Bitcoin mining hub, the sentiment has been muted for the past several days.

Ethereum too had recovered from the 90-day low of $3,020.88 touched on Saturday but the rebound was short-lived as it has again fallen to $3,033.32. ETH has shed 2.5 percent in the past 24-hours. Ethereum has also tumbled to the 29th position among all assets as per companiesmarketcap.com, versus 26th position on Friday.

Bitcoin and Ethereum trading precariously close to the psychological $40k level and $3k level respectively underscores the bearish sentiment at play for the two leading cryptocurrencies ever since a monetary policy stance reversal became more evident and pronounced. Incidentally, exactly a year ago, Bitcoin was trading at $38,356.44 and Ethereum at $1262.25.

The increase in stablecoins’ dominance to 8.60 percent, from 8.17 percent on Friday, despite a fall in aggregate market capitalization between the said dates too requires to be noted. There is an increasing inclination to exit volatile currencies and stay invested in the not-so-volatile stablecoins.

4th ranked Binance Coin is down 1.4 percent on an overnight basis.

6th ranked Solana and 7th ranked Cardano have lost around 3 percent in a day. Solana has also slipped a notch from the ranking as on Friday.

As inflation gets higher and painful, and the measures taken by policy makers to anchor inflationary expectations become more drastic and forceful, it could lead to an introspection on the performance and expectations from various asset classes. The urge to beat inflation and the race to identify which asset class could meaningfully do it could trigger a fresh examination of the inflation-hedge potential of various assets.

If in that moment of reckoning, cryptos can demonstrate its store of value and inflation-beating potential, then big days could come sooner than later.

In the backdrop of hyper-inflation, the battle for supremacy could be won only based on performance vis-à-vis inflation.