With Bitcoin price well over $20,000, chances are the cryptocurrency will be a topic during holiday dinner table discussions once again this year. Investors in “digital gold” in 2020 are especially merry right now, after a 500% rally from yearly lows.

Data taken from each Christmas Eve to the next shows that it isn’t just holiday cheer that is spreading, and that wallets holding 1 BTC or more have reached their highest level historically.

Much of the reason why the first-ever cryptocurrency confounds traditional financial analysts is due to a lack of understanding of the asset’s underlying network and the power of the “network effect.”

As Bitcoin spreads and becomes more decentralized, its network becomes larger and stronger. This adoption, fundamentally, is why the asset is back in a bull market.

Add in the fact that demand far outweighs the ultra scarce supply, and the price of the asset is set to increase exponentially. Later, things come crashing down, the cycle starts all over, allowing new participants to enter and history repeats.

Data taken from each Christmas Eve to the next, according to glassnode, shows this network effect and spreading of adoption in full effect. Wallets containing a full BTC or more have now reached the highest level historically on Christmas Eve. 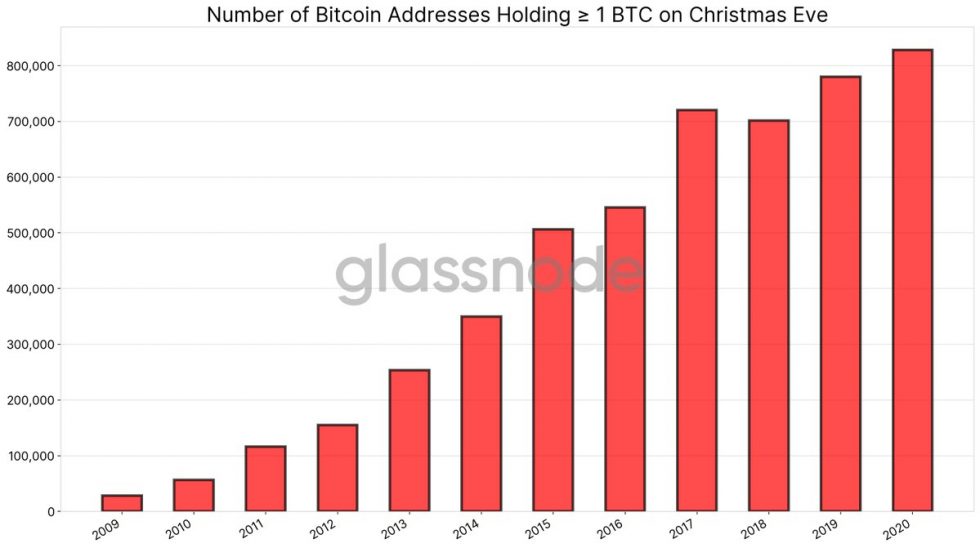 Beware of The Grinch: Derivatives Expiry Shake Up Christmas Day

A substantial sum in the billions of crypto derivatives contracts are set to expire on Christmas Day, which could spark a large increase in intraday volatility on the holiday.

In traditional markets, holidays are off-limits along with weekends. With Bitcoin and other crypto assets, weekends and holidays are notorious for low volume, because traders and investors are away from their desks, and is often when large moves occur.

However, this is often when fireworks happen. It doesn’t mean this Christmas Day won’t be cheerful for crypto investors, but it could mean that the Grinch is trying to put a damper on Bitcoin’s rally for the time being.

And regardless of what happens on Christmas Day, the chart above shows that the growth of Bitcoin price between each Christmas Eve to the next is enough to make anyone holding the cryptocurrency’s holiday merry and bright.

But it is the holiday, so let Bitcoin be, and stay away from the charts if you can.