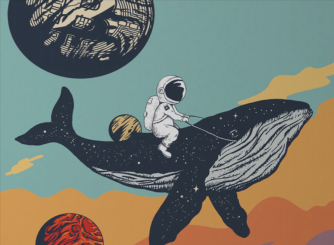 The Grayscale Bitcoin Trust (GBTC) has announced its intentions to eventually become an ETF, stating:

“In recent months there’s been a growing number of questions around the possibility of a Bitcoin ETF in the US, and we’d like to take the opportunity to provide clarity and context on what such a development would mean…

First and foremost we wish to make clear: we are 100% committed to converting GBTC into an ETF.”

GBTC has seen a discount recently following years of a premium on its share equivalent of bitcoin’s price.

That’s in great part due to restrictions whereby minted GBTC shares can’t be sold for six months, so creating the potential of diverge between spot and share price.

An ETF would allow for a direct tracking of bitcoin’s price, something that would make GBTC very uncompetitive. Hence they have little other option but to become an ETF once SEC gives approval.

This is news of news, where we go through our open tabs to clear the table. Starting with Idlib where bitcoin is apparently growing in adoption.

As in many other countries where their money has collapsed, Syria too is turning to bitcoin. As with anything usable by humans, some terrists apparently also use it, as they do many other things. However it looks like it is women and civilians by far that have taken to the most sharia compliant money in existance:

Syria as a whole is under sanctions, with refugees say in Germany unable to help their family back home. Why? Well, mighty America apparently can’t beat little Putin, although Turkey is seemingly doing a decent job of beating both, so Syrian refugees have little choice but to bitcoin if they want to buy some bread for their starving mothers.

Politics, the one thing bitcoin doesn’t care about especially if politics is wrong. For everyone else there’s Starbucks, albeit seemingly with more hoops than feeding starving Syrians with bitcoin.

Why not add a sacrifice to the bull gods while you’re at it, because frankly only the Tesla way is worthy of bitcoin gold.

It’s getting to Winklevoss levels, but what on earth does he mean by bitcoin is thermodynamically superior?

Thus, one must assume that everything is the lowest level of energy, heat death, or entropy, and thus what is higher level energy is us, humans, the known universe, which therefore can never be in an isolated system as it always swims in low energy which presumably is infinite.

As such the aim is to beat entropy by bringing it to higher level energy, or just energy as we call it. Bitcoin arguably is superior in this because due to its finite supply it contains the most accurate information, so reducing entropic noise.

Mr. Clayton joins One River’s newly formed advisory council following his service as Chair of the U.S. Securities and Exchange Commission (“SEC”) from May 2017 through December 2020.”

Revolving doors now reward you even when you do a terrible job. Imagine if he had done a good one. He would have joined Coinbase which is about to IPO direct listing on April 14 at a valuation of $100 billion.

That’s about half ethereum’s market cap, primarily because their daily discussion run by marketing guys on r/ethfinance nowadays hardly talks about eth, save for spamingly mentioning it, and chat only about whatever token marketing guys want to shill.

There’s a whole ethereum ecosystem now that is about half as big as ethereum itself. A lot of the eth value therefore has probably dissolved into all these other tokens to the point where a crypto exchange is now 50% of its market cap. Undervalued? Or just eth.

“The Securities and Exchange Commission (SEC) has charged LBRY with conducting an offering of digital assets deemed to be unregistered securities.

LBRY is a blockchain-based company that working on a digital marketplace, with its native currency LBC, for content such as images, video, audio and more…

According to the complaint, between 2016 and 2020 LBRY was said to have sold over 13 million LBC to the public via trading platforms.

LBRY is said to have sold LBC for Bitcoin then valued at $5 million. In total, the SEC alleges that LBRY received more than $11 million in U.S. dollars, Bitcoin, and services from purchasers who participated in its offering.”

Imagine enforcing the law so arbitrarily that two identical projects get treated completely differently with LBRY being little different than BTT which has recently pumped.

In jurisprudence thinking this is called dictatorship. In realistic thinking, we’d call it helpless corrupt old men trying to hold the tide of innovation by picking at the defenseless.

In radical thinking, we’d call it an obvious canary of a rotten system that knows very well it desperately needs reform and yet remains deaf instead of calling a Citizen’s assembly or some other legitimate gathering to tackle the question of how to update discriminatory laws based on wealth like the barbarism of the aristocracies of old.

“Enterprise software company R3’s Corda network, backed by many of the world’s largest banks, is following the general trend toward public-facing blockchains.

Announced Tuesday, a group of former RBS bankers, now known as LAB577, is bridging the way for eXchange inFinite (XinFin), a blockchain focused on the trade finance space. Its native token, the Ethereum-compatible XDC, will be used as a settlement coin inside Corda.”

Yup, we have no clue what it is saying either, that’s why it’s here. Only thing from it is presumably that intranets, that being private blockchains, are now being seen as the intranets that they are.

Which brings us to scalability. Now this could have been a nice article from us after a lot of research, but we may well publish one anyway. For now, this summary of the race to scale eth through second layers might suffice:

“March 2021: The Scalability Race heats up. Utterly bananas how rapidly this space is evolving. Just shows innovation can go into overdrive faster than anyone can imagine when the need is dire.

1st March: Optimism is coming this month! They have won this race!

A week later: Uh, oh, rumblings of a delay. But generalized ZK Rollups are years away, so no worries, Optimism will still win.

23rd March: Uniswap announces they will be on Optimism.

24th March: StarkWare raises a cool $75 million, three times more than Optimism, presumably to accelerate development of StarkNet, their generalized ZK rollup. Looks like generalized ZK Rollups might just land in 2021, after all.

25th March: Arbitrum announces they have a release candidate with BLS signature aggregation, commits to a fully public launch. Incidentally, Vitalik was in Optimism discord pushing them to support BLS just a day earlier.

27th March: Matter Labs drops the mic, generalized rollup zkSync 2.0 is done, public testnet in May 2021, public mainnet July 2021 if all goes well. Might I remind you until recently everyone (including Vitalik) thought a generalized ZK Rollup was years away.”

The stakes for the entire crypto space on how goes this race are very high, if not the highest. It’s crucial here that objectivism trumps any VC influences or any other considerations as these are the very pipes.

You’d think one of them will end up with 80% usage or so. Therefore who it ends up being and whether it can be captured is vital.

This isn’t the time to make any tradeoffs that objectively shouldn’t be made just because of time pressure or any other consideration, although obviously competition is competition.

Because right now people are just watching to see what natural forces eventually end up saying is worthy of looking in detail. At that point, whatever does get there needs to stand up to the most fiercest of scrutiny as the stakes are, well the highests where it concerns the current stage of blockchains.

That obviously doesn’t mean perfection as timidity might prevent the project from even getting to the stage of courting scrutiny. So our readers can be glad it’s their job, and not yours, to balance all this most difficult stuff of both needing to deliver and needing to do so in a way that won’t get your project torn apart when or if it does level up.

This race however is the most exciting thing in at least half a decade where cryptos are concerned because frankly, this is Nakamoto stuff.

Where is he by the way? Getting bored of no new Nakamoti in now what six years? Kid is probably mowing his lawn in this nice spring, thinking us all dumheads for considering him a genius.

And frankly, if he’s not sorting out all this scalability stuff, we don’t care either. He can enjoy his villa, while we look to see if all this stuff can level up.