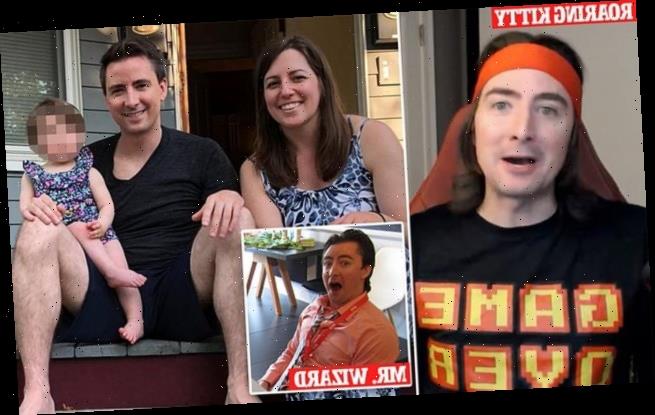 The Reddit poster and YouTube streamer who caused a Wall Street crisis by driving up the price of GameStop – and boasted about his $47 million gains – is a suburban financial adviser who nicknames himself Mr. Wizard, DailyMail.com can reveal.

Keith Gill, 34, is the man behind the Roaring Kitty YouTube streams and the DeepF***inValue Reddit posts which caused a buying frenzy for stock of the ailing retailer, and cost hedge fund billions.

Gill, a married father-of-one who lives in a three-bed home in Wilmington, Massachusetts, drove the frenzy of buying by Robinhood investors which has roiled the stock market and is now the subject of SEC and Senate inquiries.

A hedge fund which had bet that GameStop’s share price would go down was left seeking a bailout of its own from other hedge funds, and the frenzy spread to other stocks including AMC and on Thursday morning, American Airlines.

But by Thursday the sudden surge in price had become a full-blown regulatory crisis, Robinhood barred trading of GameStop – to the fury of users and politicians ranging from AOC to Ted Cruz – and Gill himself could be part of the SEC investigation.

YouTuber ‘Roaring Kitty’ has been one of the key cheerleaders of the GameStock rally. DailyMail.com has discovered he’s a father from Massachusetts 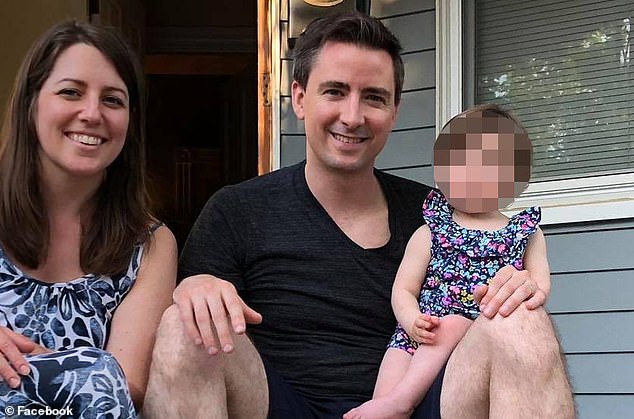 The Youtuber known as ‘Roaring Kitty’ behind the Wall Street meltdown is a Boston father named Ketih Gill, DailyMail.com can reveal

On Wednesday, as the stock price soared, he posted a screenshot which showed how his initial $745,991 investment was worth $47,973,298 million

The saga began with Gill posting a video on his YouTube channel for investing and finance tips in August, suggesting GameStop was undervalued.

But as the stock got taken up by millions of everyday investors, coordinating via the Reddit subgroup Wall Street Bets and some gambling their life savings against Wall Street veterans who were heavily shorting the company, Gill was soon being held up as the messiah of the financial flash mob movement.

The unassuming financial advisor is a far cry from the Wall Street lords he has been pitted against.

DailyMail.com was able to establish Gill’s identity through his company, Roaring Kitty LLC, named after his YouTube channel. The firm was incorporated in 2014 in Concord, New Hampshire, but dissolved 10 months later.

Gill is also identifiable in a headshot posted on his current employer’s website, In Good Company, a wing of Massachusetts investment firm MassMutual. After becoming a multi-millionaire in a matter of days, Gill appears to have fully embraced the Wall Street Bets philosophy of ‘You Only Live Once (YOLO)’, throwing caution to the winds and putting their own, and even their family’s life savings on the line in the GameStop buying frenzy.

In a post on the subreddit on Wednesday under his username ‘DeepF***ingValue’, Gill shared a screenshot of his account, showing GameStop stock worth $17,375,500 and options trades on the company worth a further $16,757,500.84

Other forum members commented ‘Bro legit might need to hire private security or an army of r**ards to protect him from these hedge funds’, ‘he is the king of the tards’, and ‘IF HE IS IN WE ARE IN’.

Back on December 22 he posted an account screenshot showing $3.4million. One user commented ‘Seriously what is your exit strategy here’, and he replied ‘What’s an exit strategy?’ 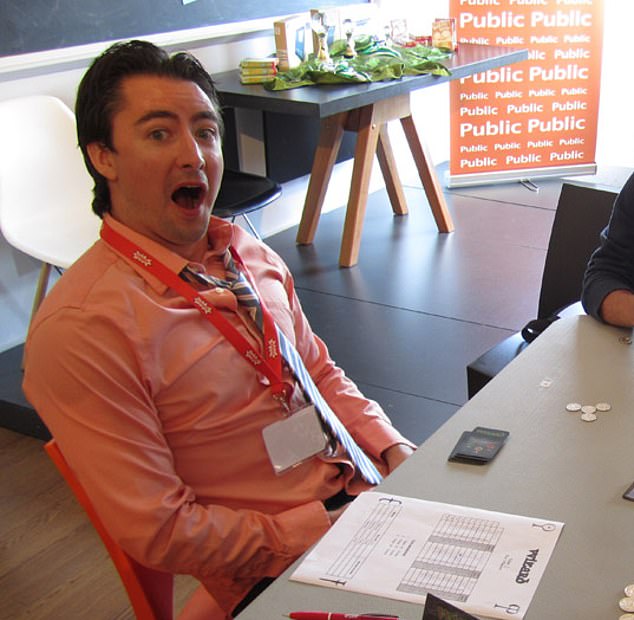 Gill is pictured grinning while playing at a 2014 ‘World Cup’ for the card game Wizard in Rome, where the top players competed for a trophy and a Galaxy tablet and where he earned the name ‘Mr. Wizard’ 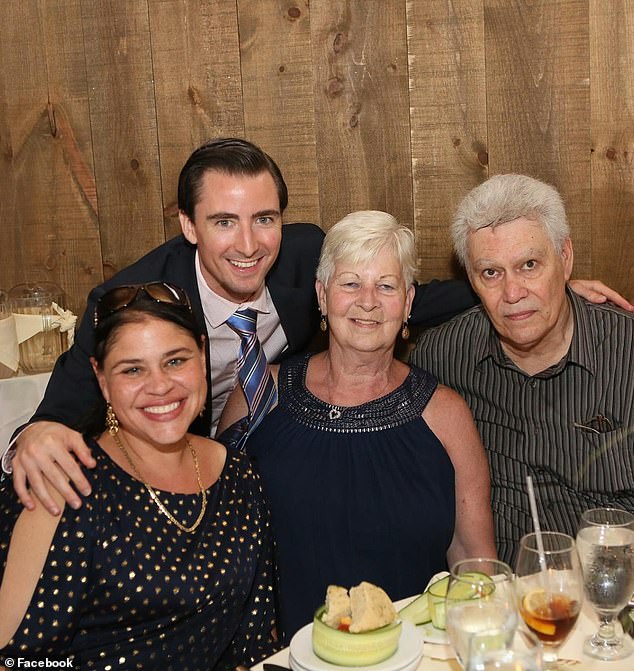 Gill is seen in a family photo with his mother Elaine d father Steven. The Gill family have a lot to celebrate – as long as the financial guru sells in time

Gill graduated in 2009 from Stonehill College, a Catholic liberal arts institution in Easton, Massachusetts, with a Bachelor of Science in Business Administration in Accounting.

He was a sports star at high school and college, whose site says he was ‘one of the most decorated runners in the rich history of the cross country and track & field programs,’ and was named Indoor Athlete of the Year in 2008 by the U.S. Track & Field and Cross Country Coaches’ Association. 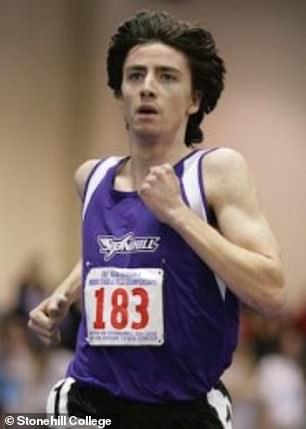 He was a sports star at high school and college, whose site says he was ‘one of the most decorated runners in the rich history of the cross country and track & field programs’

Gill was also a leader in an obscure card game that earned him the nickname ‘Mr. Wizard’.

Gill was pictured grinning while playing at a 2014 ‘World Cup’ for the card game in Rome, where the top players competed for a trophy and a Galaxy tablet.

According to an archived version of his LinkedIn profile, after graduating as an Accounting major, Gill worked as Vice President, Securities Analyst and Chief Compliance Officer at Lucidia, LLC, a now-dissolved New Hampshire investment advisory firm.

While working at Lucidia in 2010 Gill set up his own company, Debris Publishing, which dabbled in financial software by creating Quuve, a program he described as ‘the world’s first fully customizable investment management ecosystem for professional investors.’

In 2016 he moved on to a two-year stint as an Investment Operations Analyst at LexShares, a company specializing in financing high-value commercial lawsuits.

Gill’s background in lawsuits and financial regulation compliance may come in useful, as regulators close in on the Wall Street Bets Reddit forum amid accusations of both his supporters and the hedge funds they bet against manipulating the market for GameStop shares.

Since 2019, Gill has worked as a chartered financial analyst at MassMutual, giving workshops for company employees to answer their personal finance and investment questions.

In 2017 he and his wife Caroline bought a 3-bed, 2.5-bath home in Wilmington, Massachusetts for $595,000, where they are raising their two-year-old daughter. 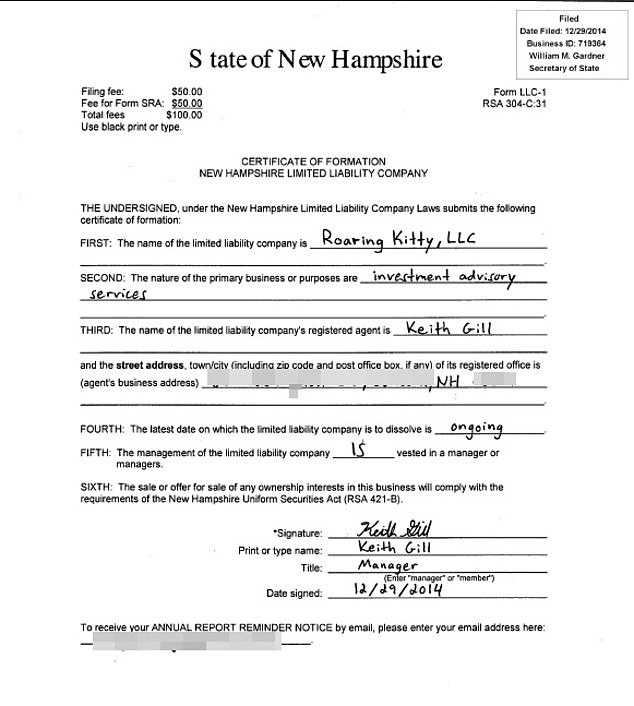 Gill’s brother, Kevin, appears to be proud of his sibling’s newfound fame as leader of the riotous subreddit, posting on his Instagram page ‘I workout, draw, juggle, and play chess. I’m also DeepF***inValue’s brother,’ referring to Gill’s Reddit pseudonym.

The Gill family have a lot to celebrate – as long as the financial guru sells in time.

Gill posted a screenshot of his trading account, showing he had bought $754,991 (more than the current value of his home) of GameStop shares, which on January 27 were worth just under $48 million.

Tragically, his sister Sara missed his rise to fame and fortune. Kevin posted that she died in June aged just 43, leaving behind her three children who were taken in by their parents.

Gill first decided to get involved in the company two months later, when he posted a video telling his followers he believed GameStop was undervalued and that an industry based on selling video game disks from main street stores instead of at-home downloads still had some growth potential.

Over the following months, notorious hedge funds Citron and Melvin Capital took the other side of the bet, building up huge short positions that would pay out large sums if the price of GameStop fell.

But when billionaire Chewy founder Ryan Cohen joined the company board on January 11 after building up a 10% stake, the Wall Street Bets community decided to pile in too, in an attempt to create a short squeeze.

The small-time but determined investors wagered that if they bought enough GameStop shares and held on to them, the hedge funds would be forced to reverse their positions, costing them billions of dollars and driving up the price of the video game company even more.

Although Gill originally advocated buying the stock purely for its intrinsic value and not as an ideological campaign against Wall Street bosses, the 4.7 million-strong Reddit group took him up as their champion and prophet anyway. As many as half of Robinhood’s 13 million users may have joined the frenzy. 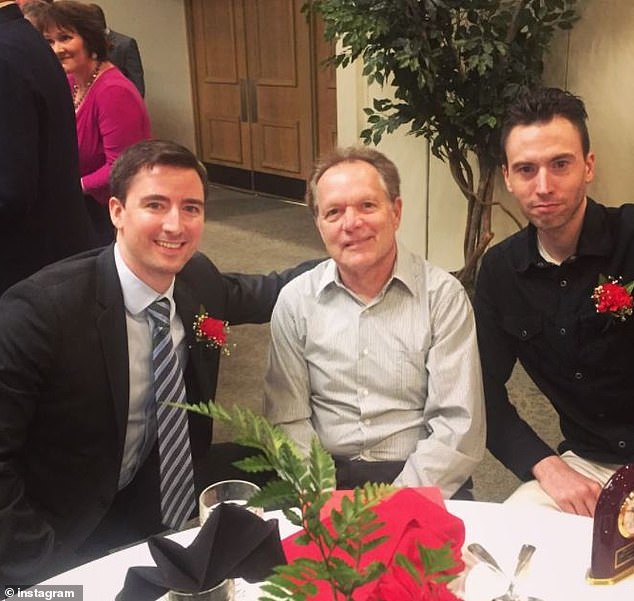 Gill is seen with his brother Kevin (right) on Instagram at a High School Hall of Fame ceremony. Kevin appears to be proud of his sibling’s newfound fame as leader of the riotous subreddit, posting on his Instagram page ‘I workout, draw, juggle, and play chess. I’m also DeepF***inValue’s brother,’ referring to Gill’s Reddit pseudonym 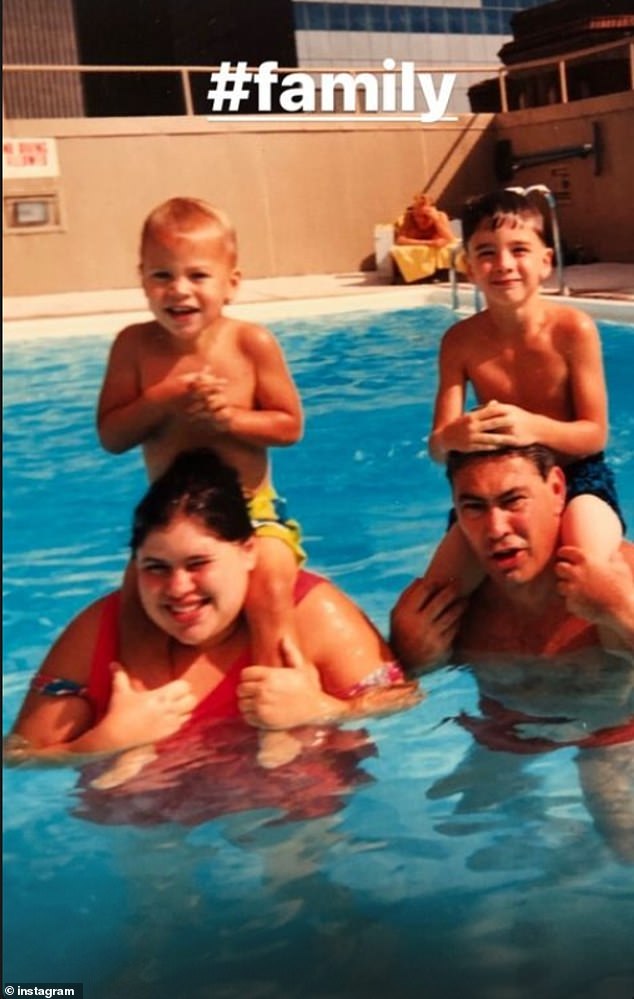 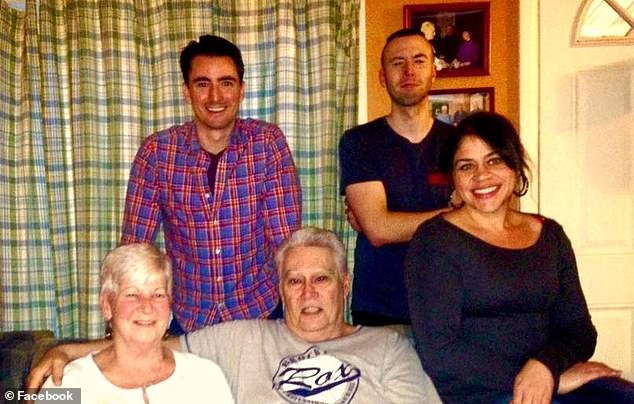 Gill is pictured with his parents Elaine and Steven, and brother Kevin. Tragically, his sister Sara missed his rise to fame and fortune. Kevin posted that she died in June aged just 43, leaving behind her three children who were taken in by their parents

Melvin Capital, the $12.5 billion hedge fund founded by Gabriel Plotkin, was one of the main targets of the Reddit campaign, after an SEC filing revealed that the fund had a large short position in GameStop.

‘By the end of the week (Or even the end of the day), Plotkin is going to have less than a college student 50k in debt who works part time at starbucks,’ one Reddit user wrote on Wednesday morning.

New York Mets owner Steve Cohen had exposure to the turbulent situation as well, after his Point72 Asset Management teamed up with Ken Griffin’s firm Citadel to inject Melvin with a combined $2.75 billion bailout on Monday to help the struggling fund.

Maplelane Capital LLC, a New York hedge fund that started the year with about $3.5 billion, was down roughly 30 percent for the year through Wednesday, with its bearish GameStop position a significant driver of losses, sources told the Wall Street Journal.

GameStop’s largest individual shareholder, Ryan Cohen, has seen his 13 percent stake increase in value by more than $2 billion over the past two weeks. The Chewy co-founder, who joined GameStop’s board this month, originally paid about $76 million for the stake and has seen his net worth increase by about $6 million per hour over the past two weeks.

Meanwhile, investor Donald Foss, the former CEO of a subprime auto lender, has seen his 5 percent stake increase by about $800 million, and GameStop CEO George Sherman’s 3.4 percent stake is up about $500 million.