London: Social media giants are being threatened with huge fines unless they do more to stamp out racist online abuse, as England’s defeat at the Euro 2020 final triggers a fresh reckoning over race relations in football.

British Prime Minister Boris Johnson said the people targeting three black players who missed spot-kicks in the penalty shootout against Italy should “crawl back under the rock from which you emerged”, while his culture minister vowed to push ahead with new laws designed to curb online attacks.

Marcus Rashford, 23, Jadon Sancho, 21, and Bukayo Saka, 19, were surrounded by a support network on Monday after being subjected to a torrent of racially-charged online abuse following England’s heartbreaking loss at Wembley Stadium on Sunday.

A “sickened” Prince William led a chorus of condemnation and demanded action.

“It is totally unacceptable that players have to endure this abhorrent behaviour,” William, who is president of the England Football Association, said.

“It must stop now and all those involved should be held accountable.” 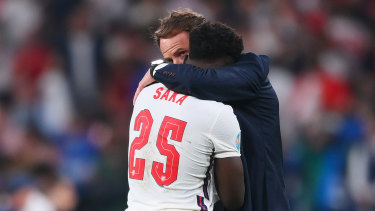 7News Australia has also been caught up in the furore after posting a story on its Facebook page following Sunday’s final with the comment: “Three black players failed in the penalty shootout”. The Facebook post linked to a story about the racial abuse.

The network apologised for the “regrettable mistake” and said it had been fixed as soon as possible.

A mural honouring Rashford, whose advocacy during the pandemic forced the government to offer more support for impoverished school students, was also defaced in Manchester in what police described as “racially aggravated” vandalism. 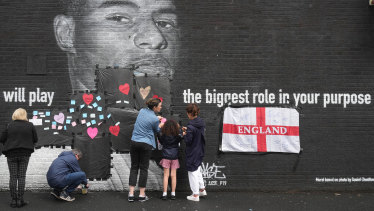 Residents put messages of support over racially-charged graffiti on a Marcus Rashford mural in Manchester.Credit:Getty

“Greater Manchester prides itself on being made up from a number of diverse communities, and hate crime in any form is completely unacceptable and not welcome here in our city,” said chief superintendent Paul Savill.

“I can take or leave football but I cannot take or leave people like you,” one message read. Other hearts simply contained the words “hero”, “admired”, and “role model”.

Rashford said the gesture left him on the verge of tears.

“I can take critique of my performance all day long,” he said in a statement. “My penalty was not good enough, it should have gone in. But I will never apologise for who I am and where I came from.

“I’m Marcus Rashford. A 23-year-old black man from Withington and Wythenshawe, South Manchester. If I have nothing else, I have that.” 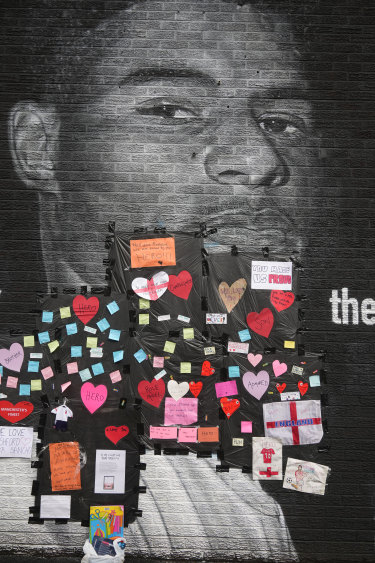 Some of the messages of support on the Rashford mural in Manchester.Credit:Getty

Sensing growing public outrage over the treatment of the three black players, Twitter said it had removed about 1000 tweets and suspended several profiles.

However several recent racially-charged tweets were removed from one profile but the account still remains active and is littered with other abuse and offensive terms.

Real estate firm Savills confirmed the account had been linked to one of its senior managers. The agency said it had suspended the staff member and noted the matter was with police.

The company said the staff member claimed his account had been hacked “by a third party”.

“Savills has acted swiftly and confirms that the individual is suspended from duty pending the findings of this investigation, which is being progressed as a priority,” it said in a statement.

Media and Sport Secretary Oliver Dowden seized on the abuse to push forward with a proposed bill to curb social media abuse and the exploitation of vulnerable children online.

The bill could impose fines of up to 10 per cent of annual global turnover if social media giants do not do more to remove offensive material.

British ministers are expected to tell social media companies to hand over details of those who made racially abusive comments towards England players online, The Times newspaper reported.

“We want real-life consequences for the people who are tweeting this abuse,” the newspaper quoted a government source as saying.

Johnson also criticised the treatment of Rashford, Sancho and Saka but he and Home Secretary Priti Patel were accused of hypocrisy for not previously condemning the booing of England players who took the knee before Euro 2020 matches in solidarity with the black community.

Patel has previously accused the national team of engaging in “gesture politics”.

Sayeeda Warsi, a Tory member of the House of Lords, told Patel via Twitter that the government and Conservatives “need to think about our role in feeding this culture in our country”.

“If we whistle and the dog reacts we can’t be shocked if it barks and bites,” Warsi said. 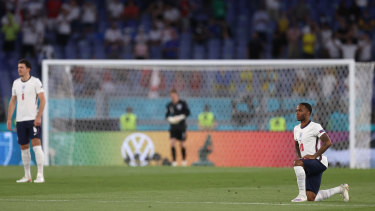 “As a proud centre right politician [and] as a proud part of a diverse vibrant nation that produced a football team that spoke to and represented England in all its modern diverse glory, it shames me that in 2021 some in politics are still playing fast and loose with issues of race.”

England captain Harry Kane on Monday defended the “three lads” who had performed well during the tournament and “had the courage to step up and take a pen when the stakes were high”.

“They deserve support and backing not the vile racist abuse they’ve had since last night,” he said.

“If you abuse anyone on social media you’re not an England fan and we don’t want you.”

The night was also marred by hundreds of fans who stormed Wembley Stadium before kick-off and engaged in violent clashes with police, security officials and other fans with tickets.

Asked whether the scenes could damage the United Kingdom’s bid to host the 2030 World Cup in partnership with Ireland, Johnson sought to play down the potential ramifications.

“It was a shame a small minority yesterday tried to spoil it, or behaved badly,” he told reporters.

“I don’t think they damaged the atmosphere – certainly not in the stadium itself.

“But irrespective of that, I do think the UK working together with Ireland has a very good case.”

England manager Gareth Southgate said abuse was unforgivable and took responsibility for the choice of penalty-takers.

“It’s just not what we stand for,” he said of the online attacks.

“We have been a beacon of light in bringing people together in people being able to relate to the national team, and the national team stands for everybody and so that togetherness has to continue.

“It’s my decision who takes the penalties, it’s not a case of players not volunteering or more experienced players backing out.”