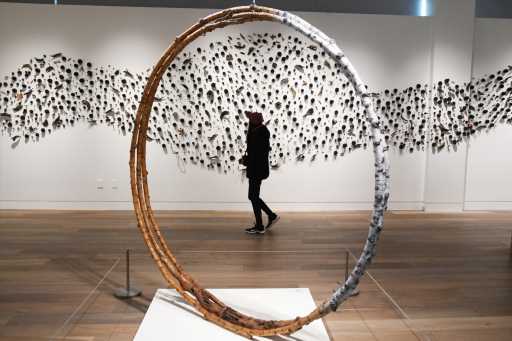 Yoshitomo Saito is a sort of anti-landscape artist. The Denver sculptor explores the enormous power of nature by focusing on the smallest of things: seeds and twigs, peppers and pine cones, sticks and insect wings.

He re-creates these frail and overlooked fragments, piece by piece, in the oldest of art forms — bronze —  transforming them into singular, potent objects that demand to be considered for the crucial role they play in the ecosystem.

As viewers can see in his current exhibition at the Denver Botanic Gardens, there is a bit of both botany and entomology in this work, a deconstruction of plants and bugs into their basic fragments so that they can be observed for their physical construction and for the way they help nature thrive and survive.

But there is also an overwhelming romance in it. A seed, after all, represents the future of the species and a wing allows it to take flight and flourish. These artworks are technical and scientific, but they also emanate hope.

The show, titled “Of Sky and Ground,” is meditative and optimistic in that way. It also required a tremendous amount of labor to assemble.

Saito uses lost wax casting to form his works, a 5,000-year-old method that requires making plaster molds of objects and pouring into them molten metal heated to 1,675 degrees before cooling and polishing. It’s a notoriously dangerous process, and bronze sculptors tell stories about mishaps and close calls that nearly ended their art-making.

Saito repeated it again and again for this exhibition. The showpiece, “Millionyearseeds,” consists of many hundreds of cast objects — acorns, pine cones of various sizes, banana peels and other seeds — brought into a mass and attached to the wall. Each piece is fixed to the surface individually and spaced just a few inches from the object next to it.

The arrangement, hung at eye level, has a mesmerizing duality to it. Each little item holds its own power. But it’s difficult not to be wowed by the entirety of the overall work. Like the forces of nature it wants to depict, “Millionyearseeds” is endless, relentless, inevitable.

This inexorability helps Saito’s work rise above the usual wildlife art that is so popular in the West. Rather than casting magnificent elk, mountain lions or bears as a way of idealizing their might, his work focuses on the precariousness of the natural world, the effort it takes for things to take root and grow.

And it acknowledges failure. How many of these seeds won’t sprout? How much energy is wasted? How much of this hope will be gobbled up by birds or consumed in the next forest fire?

It’s a very human way of considering nature, as a combination of relationships, happenstance, luck, culture and community, and it is compelling in that regard, especially in the context of the Denver Botanic Gardens, the urban oasis that explores the interplay of people and plants by design.

“Of Sky and Ground” offers other perspectives on the connections between humans and nature, some of them quite entertaining.

The piece “Wings of Fairy” consists of a set of skeletal wings, maybe 8 feet from tip to tip, which are attached to the gallery’s back wall. If they are what the title suggests, then the actual (and clearly oversized) fairy who donned them is nowhere to be found.

But by focusing on the wings, the piece does ask to think about the essence of this “fairy” creature that folklore has dreamed up and what it really is: half-human, half-insect, and maybe not as charming as fairy tales might suggest.

Even more curious is “Millionyeardrone’” a three-dimensional work set on the floor that resembles the wings of some insect that have been enlarged well beyond their natural size into something almost monstrous.

The piece, also reduced to its skeletal elements, isn’t scary as much as it is freakish, part mechanical, part organic. Is it a mistake of nature or a science experiment gone wrong? On one hand, it serves as a reminder that natural objects have been buzzing over our heads long before those remote-controlled drones we see so often now at parks and beaches. On the other hand, it’s not something you would want to encounter on a family picnic.

Saito pulls all of these ideas together nicely in a few other pieces that have humans and nature sharing the spotlight more gracefully. “Gateway” for example, takes the form of three branches — maybe aspen or birch — that have been folded into a circle, about 8 feet in circumference, and set on a pedestal in the middle of the gallery.

Although the raw material depicted is purely natural, it is clear that the object was fashioned by human hands. Branches don’t grow in circular forms; someone saw their potential to be molded and seized the moment.

But there is a genuine element of cooperation between the natural and human forces at play. The branches bend willingly without breaking, and the person shaping them respects their beautiful flexibility without snapping them in two.

The takeaway: When humans and nature collaborate with generosity and imagination, anything is possible.

“Of Sky and Ground” isn’t overloaded with objects. It is a well-edited and deftly curated exhibition assembled by the Botanic Garden’s gallery staff that, once again, demonstrates why it is crucial to have art as a part of the overall operation.

Nature is admired easily for the way it looks, smells and feels, and for its surface attributes. This beloved garden is a potent escape.

But nature has even more to offer us, and the interpretations of artists add to our time there, and help the plants and flowers — and the human visitors — reach their full potential.