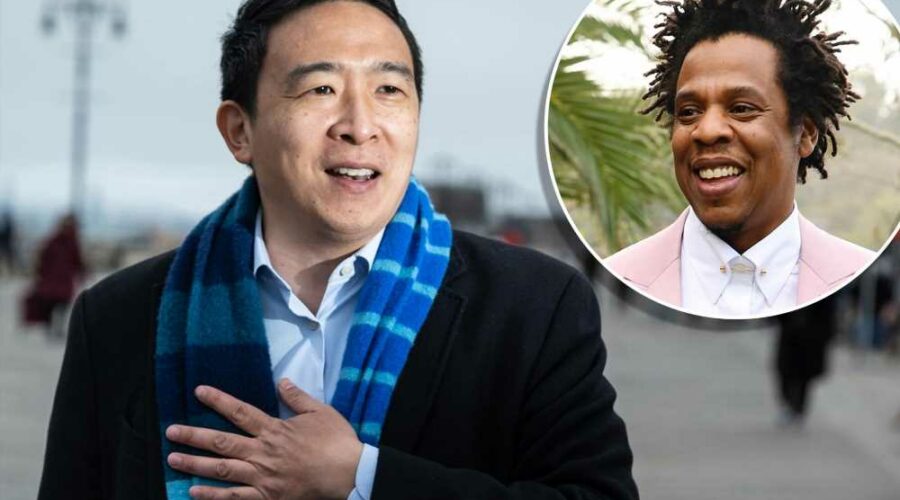 Mayoral wannabe Andrew Yang struggled to name his favorite Jay-Z song in an interview that aired Sunday — but didn’t hesitate when asked to name his top billionaires, singling out former Mayor Mike Bloomberg.

In an interview on Showtime’s “Ziwe,” Yang said that he listened to rap and hip-hop in the 1990s and 2000s, name-checking Jay-Z and Nas.

When asked to name his favorite tune from Jay-Z, Yang paused for five seconds before asking himself, “What is my favorite Jay-Z song?” — and then sang the chorus to his 2003 collaboration with Linkin Park, “Numb/Encore,” in a monotone.

He appeared unable to name the song, and said, “I think it was a duet, right?”

“Yes, there it is,” Yang said after host Ziwe Fumudoh told him it was the rock band Linkin Park that was featured in the song with the Brooklyn-born rapper.

“What? Your favorite Jay-Z song is a rock song, by the way?” the host asked incredulously.

“It was the first thing that came to mind. I think about others that I love,” Yang, 46, replied.

“And then there was the collaboration with Kanye was like, ‘word in Paris,’” Yang, said, avoid uttering the N-word in song title of the 2011 hit.

“Ninjas, in Paris! Thank you for the help, Ziwe,” Yang said, thanking the host for “bailing [him] out.”

“He’s got such a canon, you can’t really go wrong,” Yang, who said he also enjoyed listening to “a little bit of” Nas, said.

The release of the full interview comes after a viral clip posted on Twitter Saturday showed only the part of Yang struggling to answer the host’s question when asked what he is “vibing to.”

During the seven-minute interview, Fumudoh also asked Yang to name his top four favorite billionaires. The former presidential candidate and entrepreneur said Bloomberg, because the former mayor “had done a lot for the environment.”

“He made it so that people don’t smoke in restaurants and bars around New York City, which at the time seemed like a revolution,” he said.

Yang also listed Oprah Winfrey and Michael Jordan, as well as multimillionaires Dwayne “The Rock” Johnson and LeBron James — who he said is “on the way” to becoming a billionaire.

Yang and Brooklyn Borough President Eric Adams are tied for first in the mayor’s race, according to the latest poll.