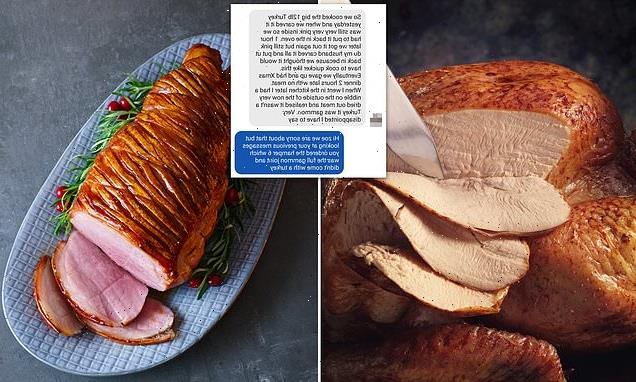 A woman complained to a butcher that her pink turkey ruined Christmas – only to be told that she had bought a gammon joint.

Zoe messaged NL Woodcock Butchers in Oldham, Greater Manchester, saying she was ‘very disappointed’ after cooking what she initially believed to be a 12lb turkey.

She put the food back in the oven because it was ‘still very, very pink inside’, before giving up and having Christmas dinner ‘two hours late with no meat’.

Zoe said she later went back into the kitchen and tasted the outside of the meat, realising it was actually gammon.

However, in response to her complaint, the butchers pointed out her previous message showing she ordered a full gammon joint that didn’t come with turkey.

Realising her mistake, the customer apologised and asked whether any other turkeys were left, later commenting: ‘Apparently I am a pillock.’

Fortunately the butcher, Neil, saw the funny side and even offered to drop off a turkey breast free of charge because it was the ‘best laugh he’s had this year.’ 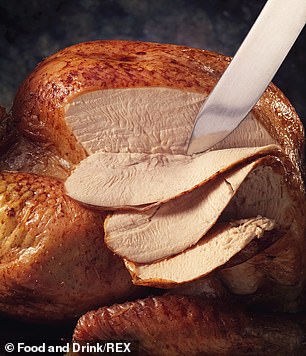 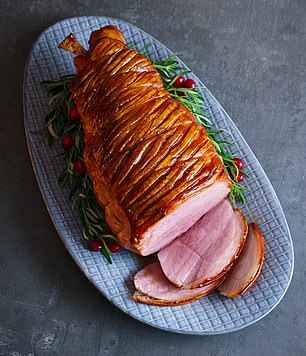 Zoe messaged NL Woodcock Butchers saying she was ‘very disappointed’ after cooking what she believed to be a 12lb turkey (file photo, left) but turned out to be a gammon joint (file, right) 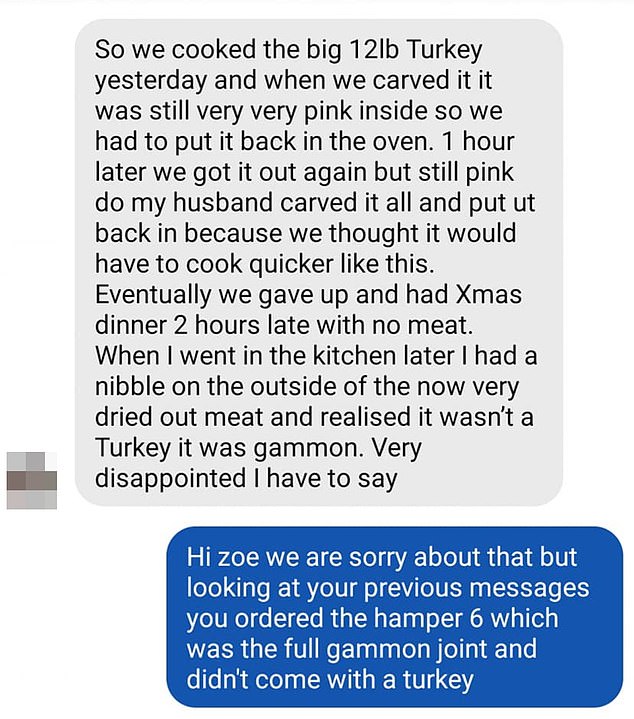 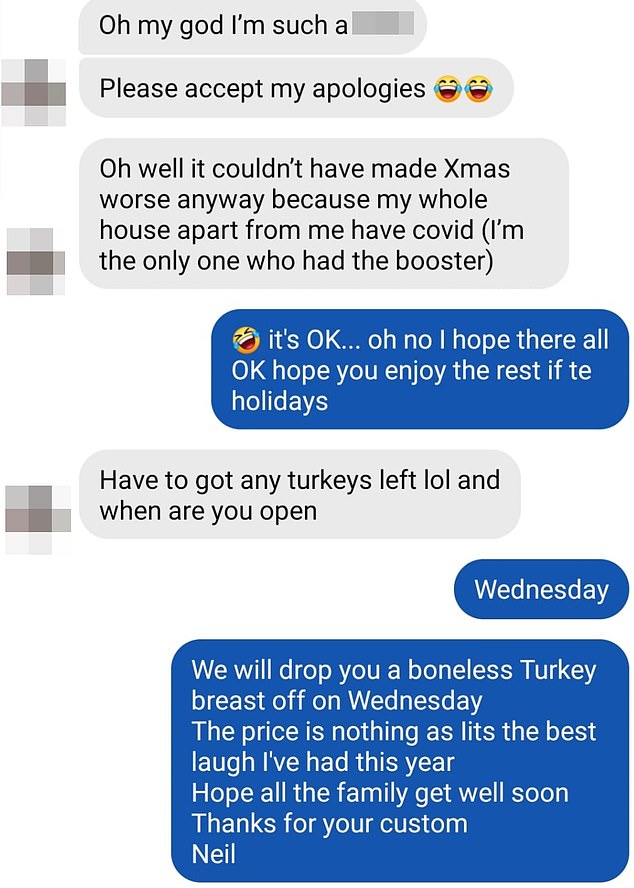 The Facebook exchange pictured above. Fortunately the butcher saw the funny side and even offered to drop off a turkey breast for free because it was the ‘best laugh he’s had this year’

Zoe messaged the butcher on Facebook, writing: ‘So we cooked the big 12lb turkey yesterday and when we carved it it was still very, very pink inside so we had to put it back in the oven.

‘One hour later we got it back out again but still pink my husband carved it and all and put it back in because we thought it would cook quicker like this.

‘Eventually we gave up and had Christmas dinner two hours late with no meat. When I went to the kitchen later I had a nibble on the outside of the now very dried out meat and realised it wasn’t turkey it was gammon. Very disappointed I have to say.’

Neil replied: ‘Hi Zoe we are sorry to hear about that but looking at your previous messages you ordered the hamper 6 which was the full gammon joint and didn’t come with the turkey.’

She added: ‘Oh well it couldn’t have made Christmas worse anyway because my whole family apart from me has Covid.’

After being asked whether any more turkeys were left, Neil said: ‘We will drop you a boneless turkey breast on Wednesday.

‘The price is nothing as it’s the best laugh I’ve had this year. Hope all the family get well soon.’

Social media users reacted to the post, with one saying: ‘So she never ordered let alone the difference’, while another simply said: ‘Priceless’

The butchers shared the exchange on Facebook and wrote: ‘Looking after our customers. Sorry Zoe but we thought it was funny.’

Social media users reacted to the post, with one commenting: ‘This is hilarious.’

Another wrote: ‘This is definitely something I would say’, while a third said: ‘She never ordered one let alone the difference’.

And a fourth added: ‘Priceless.’

Zoe also commented on the post, writing alongside laughing emojis: ‘I’m so pleased everyone has had a massive laugh at our stupidity.’

She added in response to another comment: ‘Apparently I’m a pillock’.

MailOnline has reached out to the butchers for further comment.