PATERNOSTER, South Africa — Reaching Wolfgat, a restaurant in a small seaside cottage seating only 20 in this fishing village, takes a good two hours plus by car to reach from Cape Town, about 100 miles away. The payoff is a singularly memorable multicourse dinner that tastes more of the sea than anything else and is served with personalized charm in surroundings that are at once rustic and elegant.

The remoteness is part of the appeal. It deserved its title as the world’s No. 1 Off-Map Destination, given by the new World Restaurant Awards, IMG, which were announced in Paris in February. (The group also named it restaurant of the year.)

Wolfgat is not as distant as Faviken, Magnus Nilsson’s 16-seat Swedish cabin nearly 400 miles north of Stockholm, but this South African restaurant is far more obscure. Kobus van der Merwe, a chef who has not been in the spotlight of the world stage, runs it.

“The award came as a complete surprise; even the nomination was amazing, to be on a list with other restaurants we hero-worshipped,” said Mr. van der Merwe, the chef and owner. “We’re so remote we don’t feel like we’re part of the restaurant scene.”

Mr. van der Merwe, 39, calls his cuisine strandveld, a word that refers to the plants along the shore of the Western Cape, or Atlantic Coast of South Africa. They are an essential component of his food. 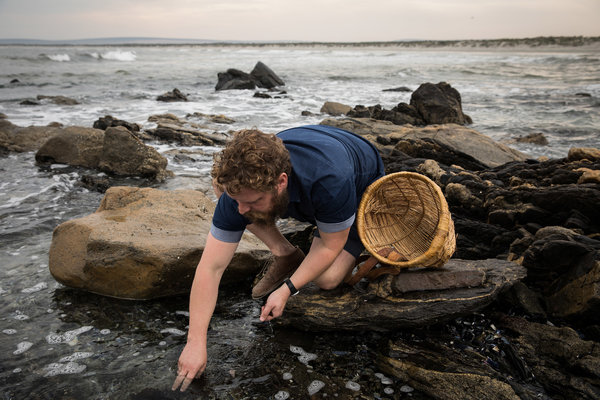 South African cooking, much less the particulars of strandveld, has not become a global trendsetter the way Nordic fare has. Its hallmarks include a frequent presence of local seafood and game like kudu and springbok, ingredients that do not travel well. The climate and the cooking of South Africa are often described as Mediterranean, with a bounty of local olive oils, tomatoes, herbs, and vegetables like artichokes, zucchini and peppers.

Many of the ingredients in Mr. van der Merwe’s kitchen, and on the plate, are hyper-local and bear virtually no carbon footprint. Seaweeds and seafood come from within walking distance at the edge of the sea. Mr. van der Merwe forages daily with his staff of five or six, something he started doing as a boy, with his grandmother.

Mr. van der Merwe came to Paternoster several years ago to help his parents, who had a small grocery there called Die Winkel but wanted to retire. (His mother is from the village.) Mr. van der Merwe had been writing music reviews in Cape Town. Classical music has been an abiding interest — he’s a pianist — but he wound up in journalism after quitting culinary school. Jobs for chefs were mainly in hotel kitchens, which did not interest him.

In Paternoster, he returned to cooking, taking over a kind of fish and chips spot attached to the grocery store. He changed the menu with ingredients he gathered along the shore. Then, to establish a place of his own, three years ago he found the whitewashed 130-year old cottage that became Wolfgat. “I feel very lucky to have this place,” he said.

Named for an archaeologically significant cave nearby, Wolfgat is essentially a one-room affair with a porch overlooking the sea. The dining room occupies the front area, divided from the kitchen by a free-standing counter used by the staff to plate the food for each course in full view. Shelves of ingredients, like homemade vinegars, shrubs and flavored salts, cover one wall.

As we entered, the crew was busy arranging mussels, clams and oysters in shallow bowls on beds of stones. Those were first course “snacks” along with limpets, another bivalve, ground up with white wine and butter and served warm. A homespun bag held bread that came with butter seasoned with salted fish.

Another six courses followed, written on the menu mostly in Afrikaans but explained, verbally in English, usually by the genial auburn-bearded Mr. van der Merwe.

Many of the dishes, often inventively presented on stones or plants, incorporated unfamiliar ingredients specific to the region, like those limpets, and made it clear that the shores of the United States can be underutilized. Mussels were also bedded on white bean purée with chewy dune spinach leaves. Pickled silvers (fish spiked with Indian seasonings, like turmeric and cumin) and wild garlic followed. Smoked snook, a South African fish, wrapped in seaweed sat in a pool of tomato broth. A lush medium-rare portion of springbok fillet with a slightly sweet flavor, like buffalo, came with biltong (jerky) also made from the same local antelope. A swirl of amasi, a fermented yogurt-like product, served with figs was a palate-cleanser. Pear ice cream with meringue provided the finale.

The brief wine list at Wolfgat is entirely South African, a category of wines that is underappreciated in the United States. There’s a strong emphasis on chenin blanc, a grape that does very well and is often vinified with finesse. The reds are mostly Rhone varietals like shiraz, grenache and cinsault, along with pinotage, the hybrid native to South Africa. At Wolfgat they’re poured into delicate stemware, contrasting the handmade, often rough-hewn pottery and wooden dinnerware.

The six-course menu, snacks included, changes daily, a good thing since many of Wolfgat’s customers are regulars, vying for tables along with an increasingly international following.

Wolfgat, 10 Sampson Street, Paternoster, South Africa. Lunch is served Wednesday through Sunday, dinner Friday and Saturday, 850 rand or about $59, not including beverages. Reservations online can be made 90 days in advance: wolfgat.co.za.

Florence Fabricant is a food and wine writer. She writes the weekly Front Burner and Off the Menu columns, as well as the Pairings column, which appears alongside the monthly wine reviews. She has also written 12 cookbooks.

Some Frankie & Benny's restaurants to permanently close after lockdown

Yes, You Can (and Should) Still Protest Even If You Can't Be There Physically. Here's How