An important issue that will dominate politics and challenge governments in coming years is inequality, both income and wealth inequality.

Trump’s ascendancy to the US presidency was built on "playing the inequality card", skilfully crafted by adviser Steve Bannon as an appeal to those who "had been left behind" – initially the so-called "angry white males" who hadn’t seen an improvement in their standard of living in a couple of decades. 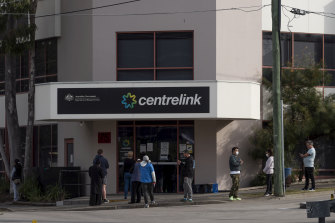 People on JobSeeker are already being left behind, writes John Hewson.Credit:Rhett Wyman

It was an easy get – to blame this on Washington elites, cheap Chinese and Mexican imports, weak borders and excessive immigration, promising to "drain the Washington swamp", create jobs, restore the glory of the rust belt states, build a wall and impose tariffs.

Of course, none of this was delivered. Inequality continues to worsen in the US, seriously compounded by COVID-19 and its economic and social policy consequences.

The increase in inequality has been, to varying degrees, a global phenomenon. Speaking broadly, COVID-19 has impacted more directly and severely on lower-income groups. While some COVID-19 budgetary assistance from governments did improve incomes for a time, the unemployment consequences – expected to persist for several years – risk entrenching both income and wealth inequality, with disparities between men and women, young and old, majorities and minorities.

While much of the financial assistance extended by governments tends to differentially favour particular industries, activities and income classes, the flood of liquidity from central banks drove a global explosion of asset prices, especially shares and property, to the conspicuous benefit of the wealthy (in terms of both their income and wealth).

As a result, governments and central banks are globally under mounting pressure to recognise and be held accountable for the impacts of their policy initiatives on inequality.

Concerns about inequality extend well beyond their economic and social significance. As Tony Ward argues in a Conversation piece, the less equal we become the less we trust expertise, science and authority – “Inequality is a corrosive solvent”. An epitaph for the Trump era?

I have been advising the ACOSS/UNSW Poverty and Inequality Partnership. The latest report provides a baseline of data against which to assess the impact that both the national disasters of 2019-20 and the pandemic are having on inequality in Australia, by revealing where different groups fit in the income and wealth scale along with the direct causes of inequality. The study also provides a basis to assess the impact of the government policies introduced in response to these events on the living standards of different groups in our community.

There is little doubt the Morrison government is not consciously aware or concerned about the likely impact on inequality of their various responses to what are the worst economic and social circumstances since the Great Depression. Their motivation is to act quickly and decisively to offer temporary and reversible assistance.

Nevertheless, it is encouraging that JobSeeker and JobKeeper payments actually reduce overall income inequality despite the dramatic rise in inequality of private incomes (especially wages and self-employment) in the recession, although there are significant “losers” who are excluded from JobKeeper, including many casuals, those on various visa arrangements and those in universities.

However, as these payments are being wound back the effects of sustained high unemployment and lower income support payments are beginning to become evident, exacerbating income inequality.

Clearly, if income supports are not replaced by strong and sustained employment growth and an adequate, permanent, increase in unemployment benefits, we are likely to exit the recession with higher levels of income inequality.

People on JobSeeker, including single parents, are already being left seriously behind, with the government cutting the benefit to $50 a day at year's end, and threatening to cut it further back to the old Newstart level of $40 a day, a level that hadn’t been increased in real terms in about a quarter of a century.

The Reserve Bank has an important role to play as well. If it sustains the recent levels of monetary stimulus, such that financial and property markets continue to grow much stronger than our overall economic growth and wages growth, wealth inequality will also increase further.

As high-income earners tend to save more of their income, they are better able to capitalise on higher investment returns and increases in property prices, to invest rather than spend as the government has assumed.

It is also significant that, despite recession job losses being more significant for women than men, 60 per cent of the tax cut benefits flow to men.

John Hewson is a professor at the Crawford School of Public Policy, ANU, and a former Liberal opposition leader.