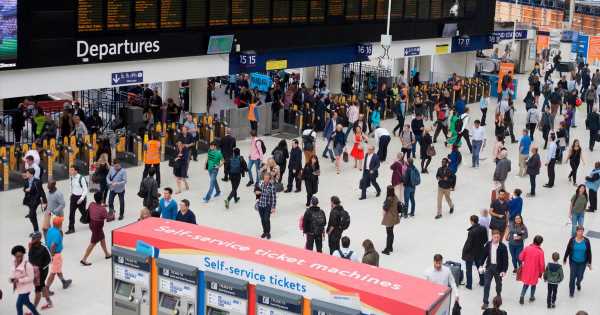 The biggest and busiest station in the UK with nearly 87 million people passing through it each year, Waterloo Station is also home to a vast network of arches that is inaccessible to the public.

Dating back to 1848, Waterloo was built as an extension from Nine Elms Railway station, the London Terminus in the 1830s.

But what many people don't know is just how much history lies in the station's arches, MyLondon reports.

In August 1966, Arch 103 on Tinworth Street was used to hide a police van after Harry Roberts and his gang shot three policemen.

The other arches at the station were useful in preventing Waterloo from sinking into the marshland and over the years were added to.

In the 1930s and 1940s, the network of arches were still used as offices and luggage facilities – but they are now abandoned and completely sealed off to the public.

In 2019, author and London historical enthusiast Rob Lordan visited the cavernous depths, and took some fascinating photos of what lurks below.

In a YouTube video, Rob details the history of Waterloo Station first then moves onto his discovery.

Rob said: "In the autumn of 2019 I was lucky to be granted access to this mysterious area beneath Waterloo which the public never get to see."

He described the disused area as "dark, dusty and slightly creepy."

Before entering the labyrinth, Rob was taken to a disused pedestrian subway, a contrast from the hubbub overhead.

He shows viewers just how spacious the chambers are and how they still do their crucial job propping up the station above.

Rob explains: "During the First World War an area beneath the terminal was fortified in order to provide storage for important government documents – making sense since Whitehall and the Houses of Parliament are located just across from the station."

In the video, Rob demonstrates a former WWII air raid shelter, where station staff would retreat whenever the sirens started blaring.

There is still a siren located outside Waterloo – but this may be a more modern one to alert people to flooding.

Rob also visits an abandoned part of the maze where typewriting would have taken place – a beige coloured room which is largely damaged, and the windows from the supervisor's office smashed.

Viewers are also shown some old toilet cubicles, mainly for the male staff who worked underground. For female employees, there is a solitary cubicle.

Rob also finds two steel bathtubs during his journey, which likely would have been used by staff covered in the grit and grease of the earlier trains.

During the video, he explains how the underground network was also used as a "social hub" with bars and recreational areas for staff to mingle and relax after a hard day at work.

One such area had a full-sized snooker table and Rob claims he saw a full-sized boxing ring which was further sealed off due to being in a hazardous area.

He points out a fascinating sign behind the snooker table which reads "ear protection must be worn."

This referred to the rifle club for railway staff, which Rob estimates was in use until the 1980s.