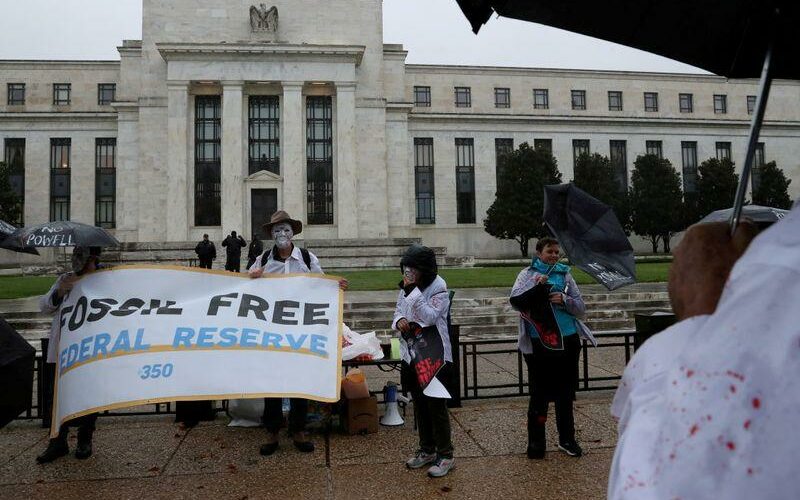 WASHINGTON (Reuters) – While the U.S. Federal Reserve trails other major central banks in tackling climate change, it’s catching up on a critical front: figuring out if rising temperatures could topple a major bank or even the entire financial system.

FILE PHOTO: Climate change activists voice their opposition to U.S. President Joe Biden reappointing Jerome Powell to serve a second four-year term as the chairman of the Federal Reserve and demand Biden appoint a climate advocate, during a rally outside the Federal Reserve in Washington, U.S., October 29, 2021. REUTERS/Leah Millis

The potential effects of climate change – namely through rising sea levels, worsening floods and fires, and government policies transitioning away from carbon-heavy industry – could destroy trillions of dollars of assets around the globe. As major lenders to the oil and gas industry, U.S. banks could be in the eye of the storm, according to regulators and risk management experts.

Despite being the most influential central bank in the world, the Fed has long lagged its peers in getting a grip on those risks.

Over the past year, however, the Fed has ramped up pressure on big banks to scan their portfolios for climate change risks and could be in a position to run a formal scenario analysis and release broad findings to the public in 2023, according to seven industry executives with direct knowledge of the discussions who declined to be named.

A formal climate change scenario analysis would give regulators and investors the clearest picture yet of big banks’ exposure to climate change, and increase pressure on the industry to make good on pledges cemented at this month’s U.N. climate summit to transition away from fossil-fuel lending.

“Right now there really isn’t any data about the scale and magnitude, or really, system-wide risks,” said Todd Phillips, a director at think tank the Center for American Progress.

The banks declined or did not respond to requests for comment.

Some European regulators have already started testing their banks for climate change risks.

Reuters reported in May that Fed supervisors had begun privately pressing lenders for data and details on their efforts to assess the exposure of their loan books to climate change.

Those discussions are being driven by Kevin Stiroh, who began leading the Fed’s climate change supervisory work in February. They have intensified in recent months and started to focus on how a balance sheet scenario analysis might work, according to the executives.

“Broadly speaking, regulators are moving forward with all due speed on this,” said Sean Campbell, head of policy research at the Financial Services Forum, which represents big banks, adding a 2023 timeline “is about right.”

Fed officials have not previously indicated when they would expect to perform an analysis. In an interview with Reuters, Randal Quarles, the Fed’s outgoing vice chair for supervision, said that there was no official timeline, but he likewise told Reuters two years “sounds about right.”

Unlike bank stress tests which allocate capital, the scenario analysis is expected to broadly function as a standalone data-gathering exercise and would not result in capital charges, said the executives and the Forum’s Campbell.

Nevertheless, it would generate critical data that could pave the way for regulators to introduce capital penalties or other lending restrictions.

In a recent interview with Reuters, JPMorgan CEO Jamie Dimon said he believed climate scrutiny from the Fed was “unavoidable” and would eventually lead to additional capital requirements.

Some congressional Democrats and progressive groups want the Fed to move faster and roll out an analysis as early as next year, and hope an impending reshuffle of the central bank’s board may speed things up.

“What they have now certainly would allow them to start running some level of scenarios both on physical and transition risks,” said Phillip Basil, director of banking policy at progressive think tank Better Markets and a former Fed official.

Republicans say the Fed should not drive climate policy and fear oil and gas companies could lose access to capital.

“They’re super sensitive to the politics around this,” said one of the industry executives referring to Fed officials.

The Fed is an independent agency and chair Jerome Powell, who could soon be renominated to the role, has said the central bank’s mandate is to focus only on risk-management issues.

“The Fed should pursue scenario analysis, and analysis of the effect of climate on the financial system generally and rigorously and analytically,” Quarles told Reuters.

“There’s a lot of work to be done in developing something like that.”

Climate risk testing is highly complex and novel territory for the Fed which is looking closely at what its counterparts in Europe and elsewhere are doing , the people said.

The Netherlands and France have put their banks through climate-change exams, and the Bank of England and European Central Bank plan to do the same in coming months.

Broadly speaking, those exams assess how bank balance sheets would fare under a range of economic scenarios which are modeled based on how aggressively policymakers act to curb temperature rises.

For example, the Bank of England’s upcoming analysis includes two scenarios in which both early and rushed policy responses ultimately help cap average global temperature rises at 1.8 degrees Celsius higher than pre-industrial levels, and a third scenario in which inaction results in a 3.3 degrees Celsius increase.

So far, no country has gone so far as to directly tie bank capital requirements to the results.

The Fed last year joined the Network for Greening the Financial System, an international group of regulators which has designed a range of scenarios the central bank could lean on.

Much of the supervisory discussions are focused on how banks can identify, analyze and model both financial and non-financial data. One executive said lenders are struggling with stale and retrospective weather data, and how to capture emissions related to clients’ downstream suppliers, among other challenges.

Fed governor Lael Brainard, who could potentially replace Powell or Quarles, in a speech last month acknowledged the data challenges, but said regulators have to start somewhere.

It was unclear if the Fed would follow its overseas peers and publish the aggregate results from all the big banks, rather than from each institution, said several of the sources.

Campbell said it was also unclear whether the Fed would give banks specific climate change scenarios similar to the economic scenarios it devises for annual bank stress tests, or just broad parameters.

He added it was not a given the Fed would ultimately try to use a scenario analysis to allocate capital because such exercises try to gauge risks over a much longer time horizon and with far bigger assumptions than traditional bank stress tests.

Some bankers, though, disagree.

“When they figure out what they really want to stress test and it’s really real, they probably will appoint capital,” said Dimon.