Washington: About 93 per cent of the racial justice protests that swept the United States this summer remained peaceful and nondestructive, according to a report released on Thursday, making the violence and property damage that has dominated political discourse a minute portion of the thousands of demonstrations that followed the May 25 death of George Floyd in Minneapolis police custody.

The report, produced by the nonprofit Armed Conflict Location & Event Data Project (ACLED), also concluded that an escalation in government response to protests and a sharp rise in extremist activity means the United States faces a growing risk of "political violence and instability" before the 2020 election. 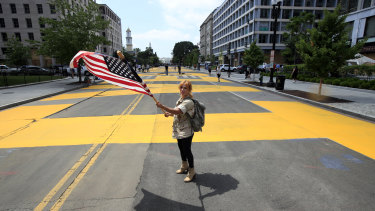 Beth Shafa waves an American Flag near the White House.Credit:AP

ACLED, which monitors war zones and political upheaval across the world, produced the U.S. Crisis Monitor report with Princeton University's Bridging Divides Initiative. Using press accounts and other public information, the report identified 7750 protests from May 26 through August 22 that were linked to the Black Lives Matter movement. The protests took place in 2400 locations across all 50 states and the District of Columbia.

The group identified about 220 locations where the protests did become "violent," which authors of the report defined as demonstrators clashing with police or counterprotesters, or causing property damage.

Even in those cases, the upheaval was "largely confined to specific blocks, rather than dispersed throughout the city," the report states.

Still, the researchers warned of "violent political polarisation" in the United States, which they fear could spill over into the November election.

"In this hyper-polarised environment, state forces are taking a more heavy-handed approach to dissent, nonstate actors are becoming more active and assertive, and counter demonstrators are looking to resolve their political disputes in the street," the authors wrote.

The report noted that National Guard troops or federal agents have been dispatched at least 55 times since Floyd's death.

"Without significant mitigation efforts, these risks will continue to intensify in the lead-up to the vote, threatening to boil over in November if election results are delayed, inconclusive, or rejected as fraudulent."

ACLED had previously focused on studying violent incidents in dozens of foreign countries, including Mexico, Mozambique and Pakistan. But after the protests surrounding Floyd's death erupted this summer, the group decided to also conduct research within the United States.

The report highlights what it called a dramatic escalation in the government's response to protests.

Police or other government agencies intervened to stop or confront protesters in about 10 per cent of the protests for racial justice nationwide. In a little more than half of those cases authorities used force ranging "from firing less-lethal weapons like tear gas, rubber bullets, and pepper spray to beating demonstrators with batons," the report states. 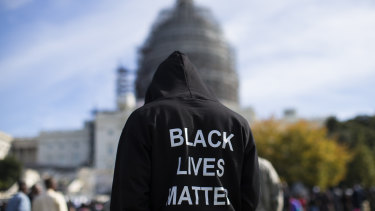 "The heavy-handed police response appears to have inflamed tensions and increased the risk of violent escalation," the report states.

"The escalating use of force against demonstrators comes amid a wider push to militarise the government's response to domestic unrest, and particularly demonstrations perceived to be linked to left-wing groups like antifa, which the administration views as a 'terrorist' organisation."

The report noted that National Guard troops or federal agents have been dispatched at least 55 times since Floyd's death.

In Portland, Oregon, where protests this northern summer have been especially intense, the arrival of federal forces in July created even more volatility, the report states. In late May and June, less than one-fourth of Portland's demonstrations were "met with state force," the report states. That share jumped to 40 per cent in July and August.

"Although federal authorities were purportedly deployed to keep the peace, the move appears to have re-escalated tensions," the report states.

The summer also saw a surge in the number of events linked to counterprotesters and "nonstate actors," which the report defines as far-right and far-left activist and extremist groups. The report says more than 20 groups this summer and their members have held more 100 demonstrations and counterdemonstrations.

On the far right, the report authors have been monitoring several self-described militia groups that have been linked to white nationalists, including the Three Percenters movement and the Proud Boys. On the far left, the authors identified antifa, a loosely organised group that claims to be a foil to far-right extremists that it believes are fascists.

Increasingly, researchers say, protesters on both sides of the country's political divide are meeting face-to-face at demonstrations.

ACLED's warning of continued escalation in violence is partially rooted in the growing numbers of Americans who have been showing up at protests armed.

Last week, an armed 17-year-old boy was arrested after he was accused of fatally shooting two men and injuring another, who had protesting the police shooting of Jacob Blake in Kenosha Wisconsin. On Saturday in Portland, a person shot and killed a 39-year-old man who had participated in a caravan of Trump supporters that drove into the city.

In all, the report states armed groups showed up at least 50 demonstrations since mid-May.

"Reports that police not only tolerate the presence of certain armed individuals at demonstrations, but in some cases actively encourage their involvement suggest this trend will continue amplifying the risk of violence," the authors wrote.

The disorder within the US has been magnified by the ongoing coronavirus pandemic as well as the subsequent surge in the nation's unemployment rate.

There have been more than 1000 "pandemic-related protests" that have also included "regular confrontation between demonstrators for and against lockdown restrictions," the report states.

"The United States is in crisis," the report concludes.

04/09/2020 World News Comments Off on US is in ‘crisis’ but of thousands of protests, most are nonviolent, report shows
World News